Saudi Arabian oil group Aramco (2222.SE) is in talks with banks for a U.S. dollar-denominated bond issue, two sources said, seeking to raise money ahead of large commitments for its major shareholder, the Saudi government.

Aramco was widely expected to become a regular bond issuer after its debut $12 billion bond deal in 2019 was followed by an $8 billion, five-part transaction in November last year.

Aramco did not immediately respond to a request for comment.

“I think it was expected. They need the cash to pay the dividends that have been promised, they’ve done it in the past too,” said a debt banker, speaking on condition of anonymity.

One of the sources said the deal could happen in the coming weeks. Qatar Petroleum is expected to issue bonds by the end of June that sources have said could go up to $10 billion in size. read more

“It could well be busy,” the source said.

Bloomberg, first to report on the bond deal earlier on Wednesday, said the debt sale would be through Islamic bonds, or sukuk, and cited an anonymous source saying Aramco could raise around $5 billion. Fortescue Metals Group (FMG.AX) has reached a deal with the Wintawari Guruma Aboriginal Corporation (WGAC) to oversee development of new mines at its Solomon Hub iron ore operations in Western Australia, the groups said in a statement. 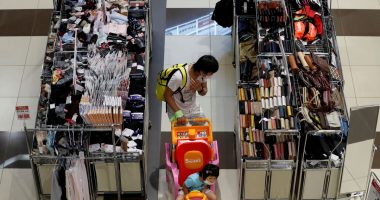 Japan’s retail sales rose for a fifth straight month in July, beating expectations as the consumer sector continued its recovery, although a coronavirus resurgence has cast doubts over the spending outlook. U.S. Gulf Coast crude oil exports are flowing again after recent hurricanes took out 26 million barrels of offshore production, according to sources and Refinitiv Eikon data, with local prices easing as more shipments moved out of the region.