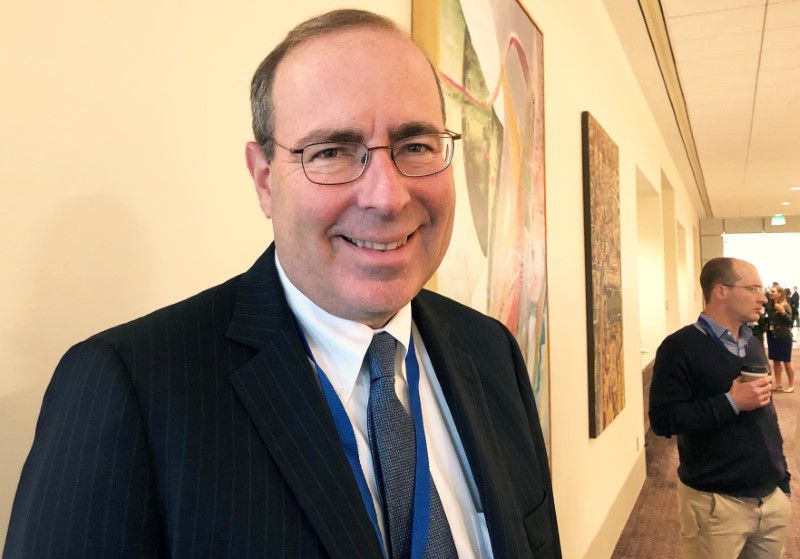 Federal Reserve Bank of Richmond President Thomas Barkin poses during a break at a Dallas Fed conference on technology in Dallas, Texas, U.S., May 23, 2019. REUTERS/Ann Saphir

EXCLUSIVE Fed’s Barkin: U.S. “closing in” on taper, but could still take a few months

ASHEVILLE, N.C., Aug 11 (Reuters) – It may take a few months more for the U.S. job market to recover enough that the Federal Reserve can reduce its crisis-era support for the economy, according to Richmond Federal Reserve Bank President Thomas Barkin, who added a centrist voice to the open debate about when to trim the central bank’s $120 billion in monthly bond purchases.

Several of Barkin’s colleagues have argued the purchases should be phased out fast to put monetary policy on a more normal footing, prepare for eventual interest rate increases as a guard against inflation, and temper housing and other asset price increases that may be boosted by the Fed’s bond buying.

In an interview on Tuesday with Reuters, Barkin, a current voting member of the Fed’s policy-setting committee, agreed the country was making progress toward the level of labor market progress the Fed has said it wants before scaling back the monthly purchases and eventually ending the program.

“We are closing in … I don’t know exactly when that will be. When we do close in on it I am very supportive of tapering and moving back toward a normal environment as quickly as the economy allows us,” Barkin said.

But he added he was not ready to commit to a timetable, arguing the Fed should stick to what it has promised: buying bonds until the labor market has more fully healed.

It is credible to think “we will get there in the next few months,” said Barkin, who spoke amid a debate at the Fed in which some of his colleagues call for reducing the bond purchases perhaps as early as October.

“I would like to be at a normal level of participation in the asset markets and a normal level of (interest) rates,” Barkin said. But “I also think that as a committee, when you put out forward guidance you think about it carefully and then do your best to live to that.”

The Fed in December said it would wait for “substantial further progress” in the jobs recovery before reducing its asset purchases, a precursor to eventual interest rate hikes.

Where others have since introduced financial stability concerns or the need to prepare for rate hikes as part of the case for an earlier bond taper, Barkin said he remained focused on employment and not the calendar.

In particular he wants to see the employment-to-population ratio rises perhaps another half a percentage point to around 59%, a benchmark he regards as a “holistic” measure of job market health. That could be met in short order or take months to climb higher.

Barkin’s comments represent a middle ground that could help shape whatever consensus emerges about the Fed’s next steps. They also show the divergent views emerging among Fed officials about what data deserves emphasis as they plan their exit from emergency monetary policies set at the start of the pandemic.

Some officials in recent days, for example, have said they feel the current year’s high rate of inflation, at around 3.5% by one of the Fed’s preferred measures, is arguably enough to meet the Fed’s current pledge to keep average inflation consistently at 2%, and perhaps slightly above it for a time.

Barkin said he was not ready to commit to that sort of stricter view of inflation averaging, but neither does he dismiss the risk that higher prices may persist.

Similarly, he said it remains an open question whether this fall will see millions return to the job market as schools reopen and programs like enhanced unemployment insurance end, or whether the pandemic, and its now dominant Delta variant, have changed life and occupational choices to a degree that labor remains scarce.

“If we don’t get a big increase of people going back into the work force when unemployment insurance expires, kids are back in school, summer is over, then I am going to have to ask myself some questions about my assumptions,” Barkin said.

Likewise he feels inflation “seems to have crested,” and should revert in coming months. But how far and how fast are uncertain, and he noted that some of the dynamics, from supply chain disruptions to strained U.S. relations with China, could keep the pace of price increases higher for longer.

“Supply chain pressures are real. You have compensation pressures. I don’t know where it is going to go. There will be reversion in a number of places. But the world is not static,” he said. “It is not credible if Wal-Mart says screw it I am going to China because they could not get stuff off a boat,” given the global shortage of shipping containers.

That uncertainty is why Barkin says he is comfortable with the Fed’s current approach downplaying forecasts and waiting for the data to show what impacts of the pandemic persist, and which ones ease.

(This story corrected day of week of the interview in third paragraph to Tuesday from Monday)Reporting by Howard Schneider; Editing by Dan Burns and Chizu Nomiyama