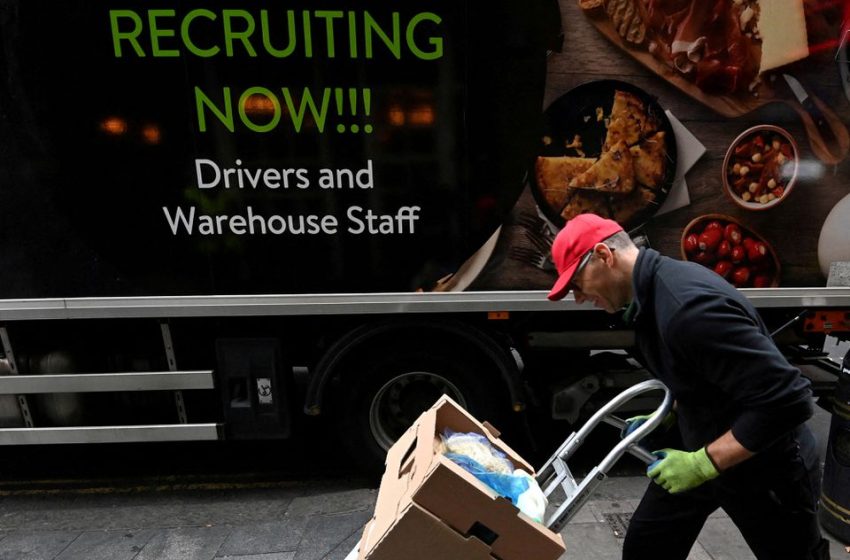 A lorry driver passes a sign on the side of his vehicle advertising for jobs as he makes a delivery, in London, Britain, October 13, 2021. REUTERS/Toby Melville

LONDON, Oct 11 (Reuters) – Britain reported a record jump in the number of people leaving the labour market in the three months to August, adding to the Bank of England’s inflation headaches.

The number of people neither in work nor looking for it rose by 252,000 from the three months to May, the biggest increase since records began in 1971, official data showed.

The leap pushed the unemployment rate down to its lowest since 1974 at 3.5%, below a median forecast of 3.6% in a Reuters poll of economists, but offering little comfort for the BoE.

It is worried that Britain’s shrinking labour market will fuel inflation pressures that are also likely to fanned by Prime Minister Liz Truss’s unfunded tax cuts.

“While there were tentative signs that the labour market is cooling from the red-hot conditions seen in recent months, the shortfall in labour supply is keeping it exceptionally tight,” Ruth Gregory, an economist at Capital Economics, said.

“That will maintain intense pressure on the Bank of England to raise rates aggressively over the coming months.”

The BoE has raised interest rates from 0.1% last December to their current level of 2.25%.

Investors are betting heavily on a full percentage-point increase in its next policy announcement on Nov. 3 as it moves to offset the inflationary implications of the tax cuts.

It is also trying to quell turmoil in the government bond market which could add to pressure for a big rate hike.

Vacancies fell to their lowest since late 2021 in the three months to September. But the ONS said the ratio of unemployed people to vacancies hit a record low, underscoring the hiring problems facing many employers.

“Combined with such a low rate of unemployment and pay rises edging upwards, we see no reason why the Bank of England would pause its upward march of interest rate rises,” Kitty Ussher, chief economist at the Institute of Directors, said.

The 0.6 percentage points increase in the inactivity rate to 21.7% in the period was the biggest on record alongside the increase between March and May 2020 when the coronavirus pandemic hit Europe, the Office for National Statistics said.

The ONS said the increase was driven by people classed as long-term sick hitting a record high and people studying.

The number of people in employment fell by 109,000 in the June-August period, less than a median forecast for a 155,000 drop in the Reuters poll.

Wages excluding bonuses rose by an annual 5.4%, their highest growth rate since the three months to August, 2021. The Reuters poll had pointed to a slightly smaller increase of 5.3%.

Including bonuses, wages rose by 6.0%, a bit stronger than the poll forecast of 5.9%.

But wages are rising by far less than inflation which came in at nearly 10% in the most recent data.

Wages excluding bonuses fell by 4.0% when adjusted for the consumer price index, close to their biggest fall since records began in 2001.