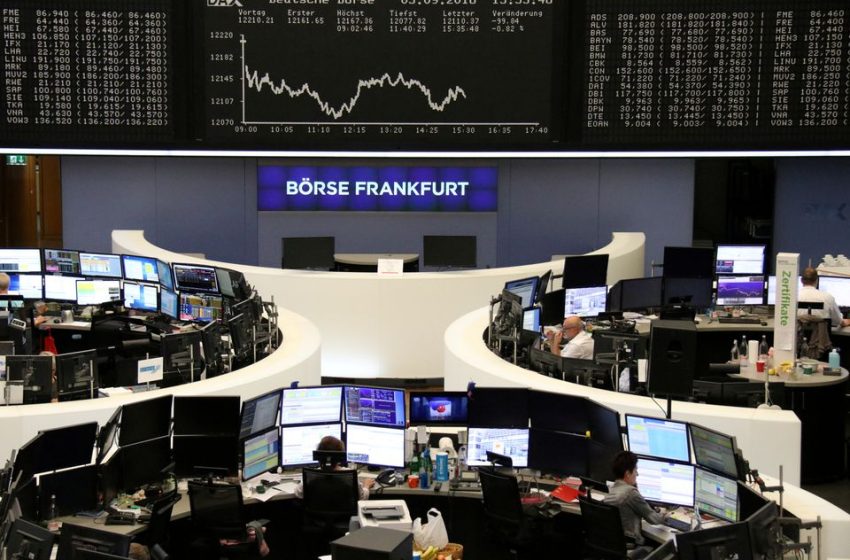 The initial push to send soldiers to Donetsk and Luhansk this week triggered coordinated, yet modest sanctions from Western countries, albeit with the prospect of more to come if Moscow seeks to push further into the country. read more

After chalking up a 3.6% fall since last Friday, the MSCI World Index (.MIWD00000PUS), a leading gauge of equity markets globally, extended gains to trade 0.3% higher in Europe, helped by broad gains across regional bourses.

The FTSE 100 (.FTSE) was up 0.7% and the pan-European STOXX Europe 600 index (.STOXX) rose 1.1%, bolstered by strong company earnings, including from automaker Stellantis (STLA.MI). Earlier, MSCI’s index of Asia-Pacific shares outside Japan (.MIAPJ0000PUS) rose 0.4%.

S&P 500 (.ESC1) stock futures pointed to a 1% higher open, rebounding after officially entering correction territory in the prior session.

“In the end what investors want to know is: does this impact earnings or not? If not, the temptation to buy the dip is high,” said Dirk Willer, global head of macro and asset allocation at Citi.

“Markets tend to see geopolitical events as opportunities,” he said, adding past years had shown this was the correct policy to adopt.”

Niklas Ekvall, chief executive of Swedish pension fund AP4, said the scheme had an allocation to equities of around 60% and planned to keep it there for now, eyeing a better risk-return than for fixed income, which accounts for 25% of its assets.

“In general, the geopolitical situation (in Ukraine), as long as it doesn’t escalate further, will have quite a limited impact on financial markets,” Ekvall said.

“Then of course, if it escalates to a full blown war in Ukraine, with further tensions into NATO, that’s a different situation.”

Commodity prices remained elevated, with traders nervous that supplies could be curtailed if the situation on Europe’s eastern edge escalates.

Brent crude , which hit seven-year highs this week, reversed course as European trade bedded in and was last down 0.7% at $96.14 a barrel, while West Texas Intermediate was up 0.8%.

After their biggest jump in three-and-a-half years on Tuesday, wheat futures pared early losses to trade down 0.1%. Corn futures also pulled back from an eight-month high and held steady, down 0.4%.

The crisis in Ukraine and the potential for surging energy prices come on top of nerves about whether the global economy can handle rising interest rates.

Aidan Yao, senior emerging Asia economist at AXA Investment Managers, told the Reuters Global Markets Forum that the Fed and other central banks would now need to contend with both market sentiment and rising energy prices.

“So it’s a rock and a hard place – the onus will be on the Fed to make sure spikes in commodity prices don’t morph further into inflation expectations and wage/pricing behaviours,” he said.

But Citi’s Willer said he did not expect events in Ukraine to deter central banks from tightening policy, with the investment bank sticking to a forecast for a 50 basis point hike from the U.S. Federal Reserve in March.

“I doubt the geopolitics will mean any major change as the Fed are seen by many as so far behind the curve,” Willer said.

“Usually the mantra is that high oil prices are a tax but that’s gone out of the window as inflation pressures have been so strong and so underestimated by central banks.”

Among European bond markets, euro zone yields rose as markets stabilised, with the German 10-year yield up around 1 basis point to 0.25%. U.S. Treasuries were last at 1.97%.

The Reserve Bank of New Zealand announced its third consecutive rate hike on Wednesday, lifting its benchmark cash rate by 25 basis points to 1%, as expected, but surprising investors with a hawkish tone. read more

The New Zealand dollar rose 1% on the news and is on its longest streak of daily gains in almost two years.

Other currencies were fairly muted, though hopes that war in Ukraine can be avoided took some of the bid from safe havens and helped the euro rise 0.2% against the dollar