The OECD’s conundrum with the real-time tax reporting framework

Many international organizations, multinational cooperations, and several countries including tax bureaucrats are endeavoring to modify the indirect tax strategy and additional protocols. They are looking for a strategy to enhance the process. One of the simpler ways to improve this process is to employ technologies designed for real-time or near real-time reporting of VAT data. This enables the system to collect and deliver up-to-the-minute data to the users.

The OECD members like Hungary, Spain, and Italy are already using real-time reporting strategies, which influence VAT (value-added tax). Due to the rapid expansion and adherence to real-time reporting strategies, other OECD members may soon follow suit after evaluating the data protocols. Apparently, not everything is as it seems. The real-time taxation framework has also been found to be prone to errors during execution.

The reason why certain administrators or corporations resist attaining this strategy might be reasonable. There is a lot of uncertainty about the strategy and the timeline for implementing it.

Although many European countries are considering real-time reporting and which has proven to be quite useful in preventing fraudulent and suspicious transactions as well as tax evasions. Still the process of bridging the gap between the expected VAT and the collection of VAT is relatively sluggish.

Spain has executed a near real-time reporting system called Suministro Inmediato de Información (SII) in 2017. The system requires the Tax Agency’s Electronic Headquarters to provide information about invoicing records (issued and received) within four days, including simplified records. However, there still exist issues impeding the approval process in other countries. Hence, companies listed in such countries must address such issues first if they intend to avail the benefits of real-time reporting. The corporations must consider favorable policies.

For instance, a look at successful reforms between 2004 and 2015 in five low-income and emerging market economies—which achieved some of the largest revenue gains after tax reform—offers some answers, countries can strengthen their capacity to collect tax revenue by pursuing reform strategies with certain distinct features. In addition, the government made it easier to pay taxes by introducing measures such as an electronic tax filing system. As a result, technology improved efficiency while reducing hindrances, such as corruption.

Simultaneously, the government reduced the minimum capital required to start a business, resulting in increased tax revenue. Real-time data can tell you how your business is doing on a local and global scale at any given moment. Since transactions are posted immediately, you can spot errors and suspicious activity sooner. You’ll be notified if account balances aren’t lining up or a deposit or payment is incorrect, allowing you to take appropriate action.

Hence, to address such errors in real-time data, a different approach must be taken. If your organization generally only receives insights once a week, as is common in many organizations, receiving these insights every second can be considered a novel approach and way of working.

Hindrances like the VAT gap (Variance between the actual VAT revenue and the collected revenue) are an immense drawback for European tax administrators. To avoid such impediments, the corporations must bridge the gap by conducting a Gap Analysis. According to sources, there is no formal method for conducting a gap analysis. Businesses generally use this tool as a foundation for measuring the investment of money, time, and human resources. The process is started by creating a technology roadmap that matches short-term and long-term goals. A road map containing specific technological solutions that apply to new products, services, or emerging technologies in the field. Developing a road map offers the business several major advantages. For example, it can help the executives identify consumer needs and the technologies required to satisfy these needs. It can also help forecast technology developments and provide a framework to plan and execute new technological growth.

As the global economy emerges increasingly digitalized, governments and their tax administrations will confront accumulating tension to advance their technological modifications. Attaining this regime rather requires a rational perception of predicaments, technology, and a strategy to execute it. In today’s contemporary digital tax realm, the tax bureaucrats must assimilate that old strategy will not generate new advancements in the organization. The countries have to strive to attain the modern strategy for the modern world to broaden the economy. 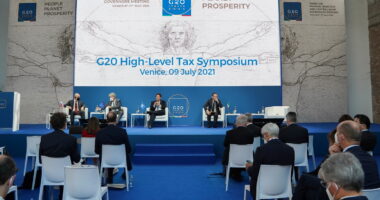 An upsurge in new coronavirus variants and poor access to vaccines in developing countries threaten the global economic recovery, finance ministers of the world’s 20 largest economies warned on Saturday.