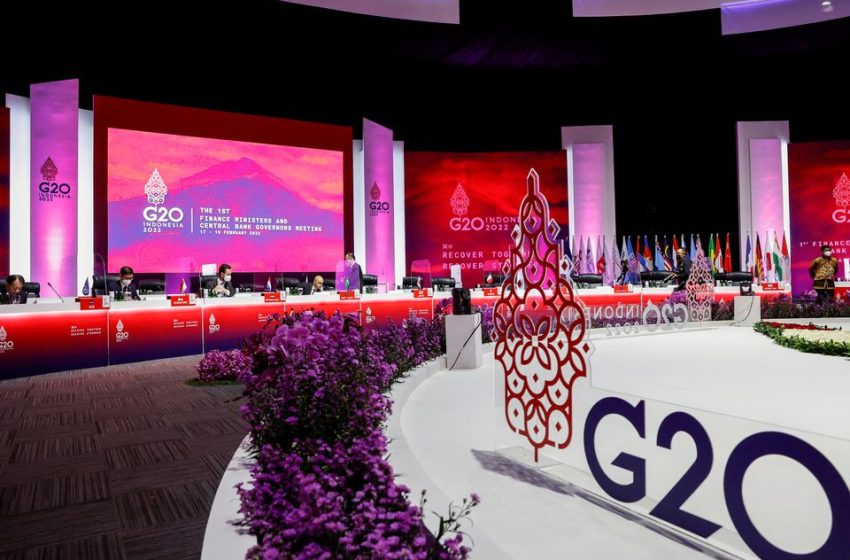 Head of delegates prepare for a meeting on the last day of the G20 finance ministers and central bank governors meeting in Jakarta, Indonesia, February 18, 2022. Mast Irham / Pool via REUTERS

JAKARTA/TOKYO, Feb 18 (Reuters) – Russia and China watered down a communique being drafted by heads of the Group of 20 major economies on Friday to remove a reference to “current” geopolitical tensions clouding the global economic outlook, sources at the talks said.

The meeting of G20 finance ministers and central bankers is taking place in the Indonesian capital Jakarta and virtually, with a final communique due to be issued at the end of Friday’s talks.

An early draft of the text seen by Reuters already contained no direct reference to the crisis on the Ukraine-Russia border, saying only that the G20 would monitor risks, “including those arising from (current) geopolitical tensions.”

Communique-drafters use brackets for language that has not been agreed by all at the table. Sources told Reuters that both Russia and China asked for the word “current” to be removed.

The latest draft reads: “We will also continue to monitor major global risks, including from geopolitical tensions that are arising, and macroeconomic and financial vulnerabilities.”

That vaguer language contrasts sharply with a warning by finance ministers of the G7 group of large western economies on Monday that Russia would face “massive” economic consequences if it chose to invade Ukraine. Neither Russia nor China are members of the G7.

The latest draft of the G20 text seen by Reuters pledged to use “all available policy tools to address the impacts of the pandemic,” while warning that future policy space was likely to be “narrower and uneven.” read more

Inflation is currently elevated in many countries due to supply disruptions, a mismatch in supply and demand, as well as rising commodity and energy costs, the draft communique said.

“Central banks will act where necessary to ensure price stability in line with their respective mandates, while remaining committed to clear communication of their policy stances,” the draft read.

The diverging pace of recovery from the pandemic is complicating the policy path for central banks. Expected steady interest rate hikes by the U.S. Federal Reserve have drawn attention to the potential fallout for emerging markets.

While cases of the Omicron variant of COVID-19 are receding in many wealthy countries, they are still rising in many developing nations including host country Indonesia.

The G20 finance leaders are also due to voice support for ensuring timely and affordable access to COVID-19 vaccines, therapeutics, diagnostics and other medical supplies for low- and middle-income countries.