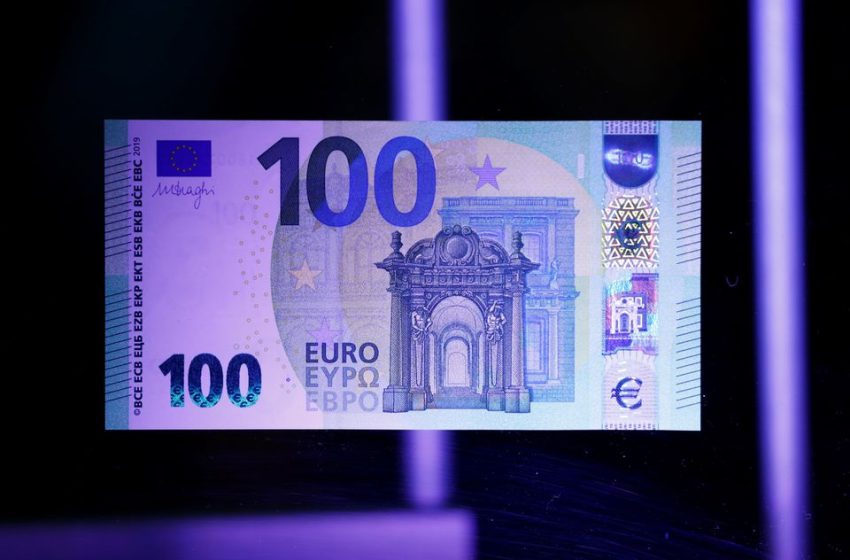 A new 100-euro banknote is presented at the ECB headquarters in Frankfurt, Germany, September 17, 2018. REUTERS/Kai Pfaffenbach

WASHINGTON/FRANKFURT, Oct 13 (Reuters) – European Central Bank staff see the need for fewer rate hikes than markets now estimate to tame inflation, according to a new internal model that could serve as a key input in future deliberations, four sources close to the discussion said.

The new model, called Target-Consistent Terminal Rate, showed the ECB needed to raise its deposit rate to 2.25% – or even less than that if at the same time it shrinks its balance sheet – to bring inflation back to its 2% goal

This is well below markets’ estimate for the ECB’s deposit rate to peak just over 3%, suggesting that ECB staff consider inflationary pressures more modest than investors and even some central bankers.

Senior staff presented the model to policymakers at a retreat in Cyprus last week.

But policymakers at the gathering gave the model a mixed reception, with many criticising some of its basic assumptions after staff failed to predict the current surge in inflation, the sources said.

The ECB has raised its deposit rate from -0.5% to 0.75% in less than two months, its fastest pace on record, and another large hike is slated for Oct. 27.

The rate is then seen rising again in December, possibly to 2%, taking it to the “neutral” territory which neither stimulates nor slows growth.

The staff study suggests that rates would then need to rise only a touch into “restrictive” territory to get inflation, now at 10%, back to 2% over the medium term.

And staff said this rate peak would be even lower if the ECB hoovered up some excess liquidity from the financial system – a reduction in its balance sheet often called quantitative tightening – the sources added.

Rate-setters agreed this rate would be treated as an input for their internal deliberations but decided they wouldn’t use it as the ECB’s policy guidance or refer to it in official communication, which is led by President Christine Lagarde.

Policymakers’ key objection was that staff models have fared poorly in recent years so there was little confidence in an indicator that was so far below current market pricing, the sources said.

While praising the underlying concept, they also argued that staff were underestimating the risk of inflation getting stuck at a relatively high level, which itself could require a higher rate peak.

Some policymakers also argued they should not be constrained by models but should take into account a complex set of indicators and factors.

The ECB gave up on mapping out future steps earlier this year after finding itself forced to change its so-called “forward guidance” several times in the face of higher-than-expected inflation.

It now says it will set policy “meeting by meeting”.