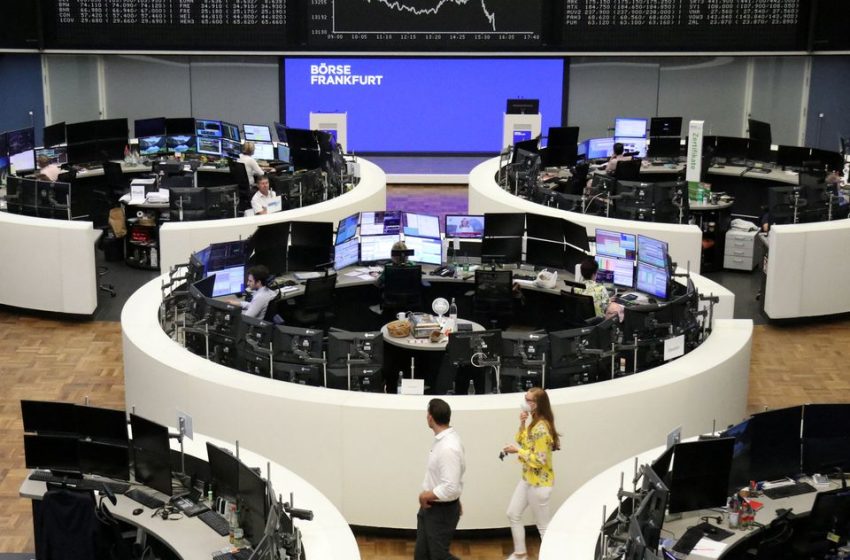 Aug 29 (Reuters) – European shares dropped on Monday, while bond yields surged as comments from central bank policymakers heightened fears of aggressive measures to stamp out inflation amid rising risks of a recession.

Their comments followed Federal Reserve Chair Jerome Powell’s warning on Friday that the U.S. central bank would raise rates as high as needed to restrict growth and keep them there “for some time”. read more

Markets are pricing in a two-thirds chance that the ECB could hike rates by 75 bps in September, up from 24% last week. read more

“Investors returning from holidays are catching up with hawkish central banks attitudes… The bearish repricing of the (ECB) rate path is likely to extend, also considering the inflation outlook is likely to deteriorate before it turns for the better,” Commerzbank strategists said in a note.

“Neither Schnabel nor Villeroy said what they will favour at the next meeting – they may want to see inflation data for August and the ECB’s revised economic forecasts before deciding,” said Andrew Kenningham, chief Europe economist at Capital Economics.

The volatility gauge for euro-zone stocks (.V2TX), widely known as ‘Europe’s fear index’, jumped to a six-week high of 29.4.

Stocks are set for a nearly 3% drop just over the last two sessions, as the combination of big rate hikes to cool rampant euro-zone inflation, a looming recession and an energy crunch weighs on sentiment.

After nearly erasing June’s selloff last month, the STOXX has shed almost 4% so far in August.

Among stocks, one of the few gainers was French drugmaker Valneva (VLS.PA), rising 0.9% on positive late-stage trial results for its COVID-19 shot.

Real estate stocks (.SX86P), among sectors viewed as “defensive” or safer bets during times of economic uncertainty, saw the slimmest losses amid a broad-based STOXX 600 selloff.

Markets in the United Kingdom were closed on Monday for a holiday.

Reporting by Anisha Sircar in Bengaluru; Editing by Subhranshu Sahu and Rashmi Aich