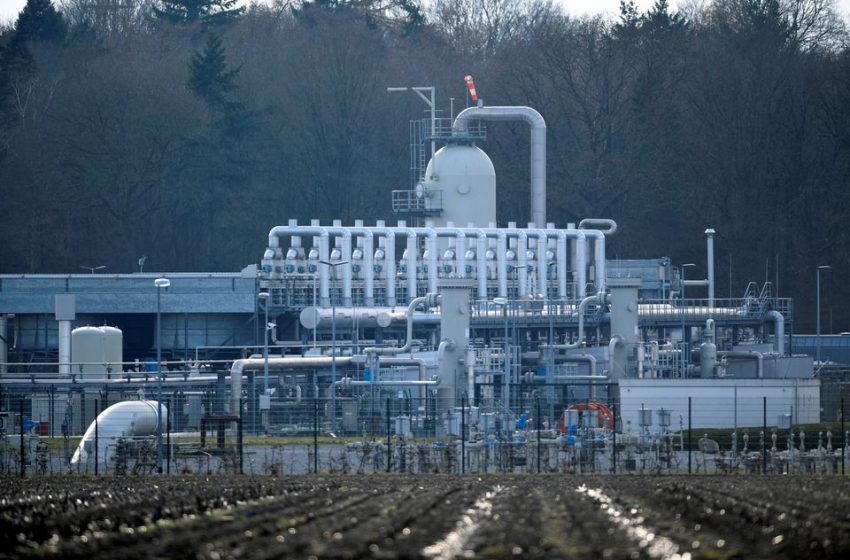 The Astora natural gas depot, which is the largest natural gas storage in Western Europe, is pictured in Rehden, Germany, March 16, 2022. REUTERS/Fabian Bimmer

LONDON, Oct 11 (Reuters) – Europe needs to pay up to import liquefied natural gas, pray for a mild winter and cut energy demand as any sabotage of infrastructure or even deeper cuts to Russian supply would make power rationing or blackouts all but inevitable.

Even if Europe manages to stay warm and keep the lights on this winter, it will have a much bigger challenge to refill depleted storage next year than it did to meet a European Union goal to build stocks to 80% of capacity by November this year.

It has exceeded that goal and storage, currently around 90%, is a buffer, but the halt of gas through the Nord Stream network from Russia to Germany, leaves a gap despite increased supplies from elsewhere.

Russia progressively reduced gas flows through Nord Stream and also via other routes after Western sanctions in response to the Ukraine war that began in February. Gas via Nord Stream stopped completely in September.

Analysts put the gas shortfall at almost 15% of average European demand in winter, meaning the continent has to cut consumption to get through the peak demand heating season.

“Household gas consumption in Germany jumped at the end of September to the highest level since March because of a cold spell, and demand was about 14% above the 2018-2022 four-year average. This is posing a threat,” he added.

Germany, Europe’s biggest economy and one of the continent’s biggest importers of Russian gas, is most exposed to the supply disruption and has been especially active in developing plans to shelter its industries and consumers.

Any hope of the Nord Stream network resuming shipments to Germany was dashed last month by suspected sabotage.

European nations have said they are working on increasing security of critical infrastructure after explosions damaged Nord Stream 1 and also Nord Stream 2, which has never operated, but had been filled with gas in readiness.

Russian outages could yet worsen if Moscow makes good on its threat of sanctioning Ukrainian energy firm Naftogaz, shutting one of the last functioning Russian gas routes to Europe.

Europe has been increasing its liquefied natural gas (LNG) imports and expanding the necessary infrastructure, but it has to compete on the global market where competition could become fiercer if the weather phenomenon known as La Nina strengthens and raises Asian demand.

That would drive prices higher. As Europe has managed to build up stocks, prices have fallen from peaks hit around the time Russia invaded Ukraine, but the price of wholesale Dutch gas, the European benchmark, is still around 80% higher than this time last year.

“Additional LNG and demand destruction have helped so far this year,” Wayne Bryan, head of European gas research at Refinitiv, said but added: “Europe needs more of the same medicine”.

Even then, it is unlikely to make up for the missing Russian gas.

Pipeline gas supplies have also increased from Azerbaijan, North Africa and Norway, but remain far below those the former leading gas exporter used to provide.

Together, the Nord Stream pipelines have a combined capacity of 110 bcm a year, and would cover over 30% of total European gas demand if they worked at full capacity, Bank of America said.

For now, Russia is delivering 86 million cubic metres (mcm) a day into northwest Europe via Poland and Ukraine, compared to an average 360 mcm/day last year, down 76%, Bernstein analysts said.

Analysts’ estimates vary. If supply continues at current levels, Europe faces a 155 mcm/day shortfall, Bernstein figures show, based on average daily demand in northwest Europe for September to March from 2017-2021 of 930 mcm.

EU countries have agreed to reduce demand by up to 15% or a total of 50 bcm this winter.

If they achieve that, storage levels should end the winter at around 55 bcm. Refilling them in time for the following winter will be complicated by absent Russian supplies that Europe was still receiving earlier this year.

A risk is that as energy supplies dwindle, energy demand will not shrink enough.

European industrial gas demand has fallen as high gas prices have led factories in energy-intensive sectors such as aluminium, steel and ammonia, have shut production.

But Germany’s Federal Network Agency, which would be in charge of gas rationing in the event of a supply emergency, said household consumption is too high to be sustainable.

A further issue is that ageing nuclear plants and difficulties cooling reactors during a summer drought have reduced French atomic energy production with knock-on effects.

Refinitiv estimates that resulting gas-for-power demand among utilities could be 30% higher this year than last.

Britain, which can import power from Europe, has also warned of power cuts this winter due to the shortages in Europe.

A more comfortable energy supply situation could be many winters away.

Francisco Blanch, analyst at Bank of America, estimated the normalisation of gas prices in Europe could take five-to-ten years.

“Europe will have to keep paying up for gas and praying for warmer weather,” he said.