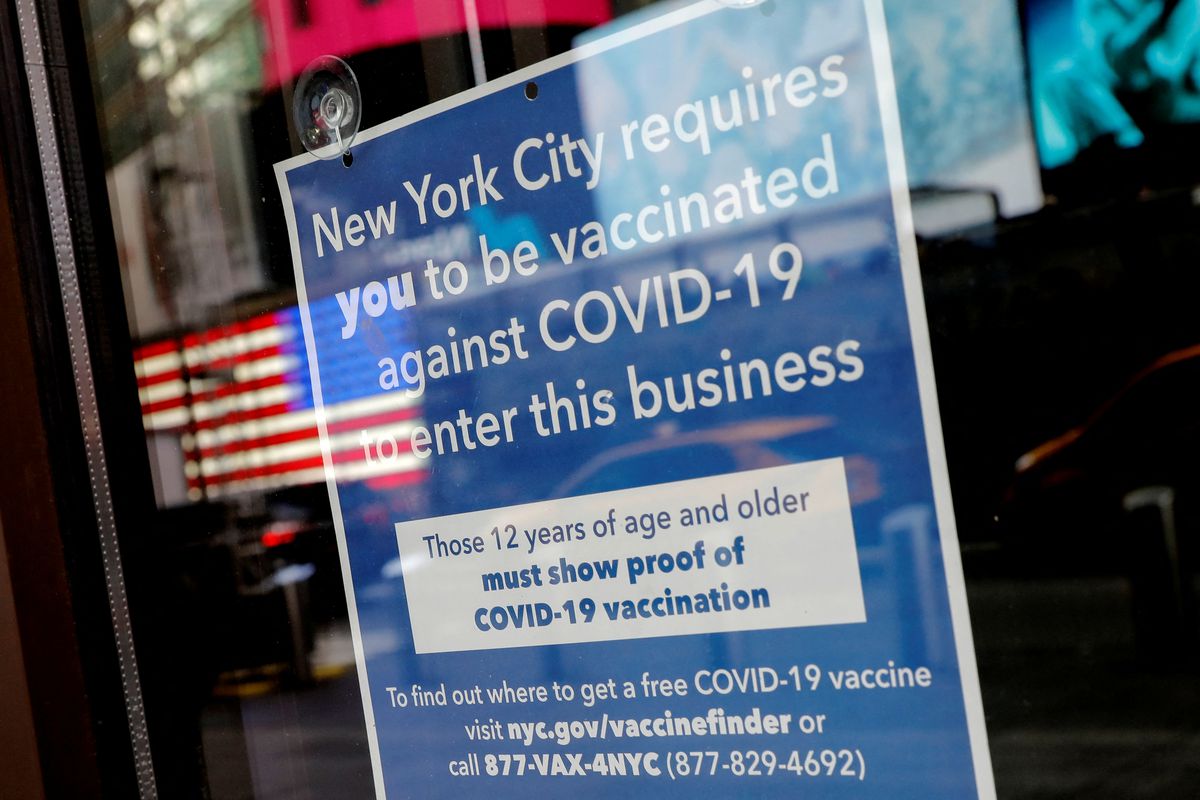 A sign is pictured on the door of a restaurant requiring patrons to be vaccinated against COVID-19 in Times Square in Manhattan New York City, New York, U.S., December 7, 2021. REUTERS/Mike Segar

They say that labor unions, already enjoying a resurgence of interest under a broader push for workers’ rights, can use the mandates to negotiate better working conditions for members as they prep for a post-pandemic economy.

“I’ve been telling people that there’s nothing like a good pandemic to increase the power of labor, and I think that’s what we’ve seen happen here,” said Jon E. Anderson, a partner at the law firm Husch Blackwell who works on labor issues.

Even as courts have blocked several vaccine mandates, other COVID-19 jab requirements are giving unions an opportunity to negotiate under federal labor law. And it is one they are using.

“The pandemic is a scary situation, and we would hope that (employees) would run to their employer for concerns about safety,” Anderson said. “But they’re running to the union and that’s certainly in their right to make that choice.”

So it could be that in discussing jabs or workplace safety, Anderson said, that the focus can shift to pay as workers – noting the widespread staff shortages – push for more money.

“Everything’s negotiable,” he said. “There’s always the potential for bargaining to morph into something else.”

Other points of contention – and so negotiation – can include exemptions for pregnant women or leeway for workers who get vaccinated but still test positive, he said.

Workers at big firms – from Kellogg’s to Starbucks – have also called strikes and tested the heft of collective action as unions look to reverse a long-running drop in membership.

And more than two-thirds of Americans approve of unions, according to a Gallup poll released in September – the highest share since 1965.

Americans “want to have unions” and understand they can check employer power and give workers a voice, said Randi Weingarten, who heads the second-largest U.S. teachers union.

“Bargaining solves problems,” the president of the American Federation of Teachers told the Thomson Reuters Foundation.

“People who haven’t bargained and don’t have the muscle of bargaining don’t understand that it’s about problem solving.”

Under emergency pandemic rules, announced by the federal government in November, businesses with 100 or more employees had to develop plans to require employees be vaccinated, or be tested for COVID-19 regularly.

Those rules have been put on hold by the courts, but similar mandates are in effect and moving forward.

When Tyson Foods – a mega meat processor and exporter – announced its vaccine mandate, the United Food and Commercial Workers International Union used it to strike what it called the “first national U.S. agreement” to give meatpacking workers paid sick leave.

The agreement “helps to ensure policies like paid leave…are also permanent improvements that strengthen these jobs and protect these workers for years to come,” said UFCW International President Marc Perrone after September’s deal.

Tyson had separately offered $200 bonuses for frontline workers who get vaccinated.

“The union said, ‘you know, this is what unionization can get you because in a non-union slaughterhouse it ain’t nothing like this,'” said Robert Bruno, a labor expert at the University of Illinois Urbana-Champaign.

Beyond the United States, vaccine mandates are generating significant pushback in some areas where vaccination rates have lagged and supplies of the jab are less plentiful.

From Italy to Canada, unions have fought vaccine requirements, saying they infringe on workers’ rights.

Newly approved COVID-19 restrictions and requirements in Britain, including mandatory jabs for National Health Service (NHS) workers, have prompted one of the biggest revolts against Prime Minister Boris Johnson since he assumed office.

Mandates may not be popular with either staff or employers, but they do provide an opportunity for both sides to talk.

“The mandate is something that I don’t think employers necessarily wanted, I’m not sure unions wanted,” Anderson said. “But they’re dealing with it.”