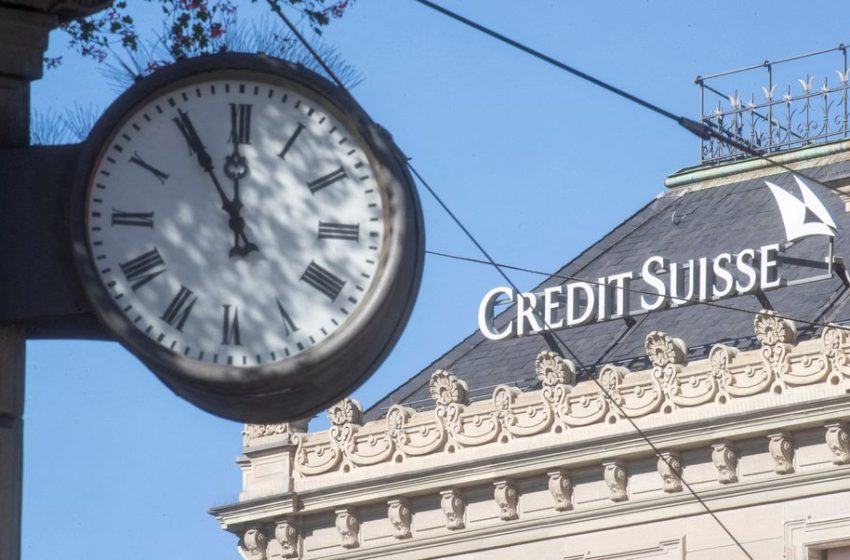 A clock is seen near the logo of Swiss bank Credit Suisse at the Paradeplatz square in Zurich, Switzerland October 5, 2022. REUTERS/Arnd Wiegmann/File Photo

ZURICH/NEW YORK, Oct 28 (Reuters) – After months of reflecting, Credit Suisse’s chairman Axel Lehmann revealed an overhaul “to rebuild Credit Suisse as a strong … bank with a firm foundation, rock-solid like our Swiss mountains”. It did not take long for the first cracks to appear.

The announcement of the blueprint early on Thursday triggered a sell-off in the bank’s stock that lobbed more than 2 billion Swiss francs ($2 billion) off its market worth, almost a fifth of its value, taking its worth to less than 11 billion Swiss francs.

“You come away with the feeling that they were rushed … with a deeply incomplete plan,” Goldman Sachs analysts wrote to their clients in a note seen by Reuters, adding that the bank’s plan was “short on detail”.

Such sentiment was echoed elsewhere. “A lot of detail is lacking still,” said Johann Scholtz, an analyst with Morningstar.

Unusually, Swiss regulator FINMA too struck a guarded tone, saying it would keep close tabs on the bank as it rolls out its plan.

“It is clear that FINMA will continue to monitor that all the supervisory requirements are met during the implementation phase of the new strategy,” it told Reuters.

On Thursday, Credit Suisse outlined plans to raise 4 billion Swiss francs from investors, cut thousands of jobs and shift its focus from investment banking towards its rich clients.

The announcement followed a difficult few weeks when the one-time respected Swiss institution had even become a ‘meme stock’ at the centre of a social media storm.

Credit Suisse said its clients pulled funds in recent weeks at a pace that led the lender to breach some regulatory requirements for liquidity, underscoring the deep impact of wild market swings and social media speculation about its health.

Asked about this, FINMA said: “It is clear that a credible plan must exist for how the buffers can be replenished within a reasonable period.”

The bank’s turnaround plan is long-winded and complex.

Its chairman Lehmann sought to bring it to the point. “We need to remember our origins and return to the core of our business,” he told analysts, referring to its wealth management business.

In its bid to restore profitability after a string of scandals and losses, the bank will cut its workforce by roughly 9,000 to about 43,000 by the end of 2025.

It will separate its investment bank to create CS First Boston, focused on advisory work such as mergers and acquisitions and arranging deals on capital markets. It intends to sell off risky investments.

The bank aims to reach a return on tangible equity – a key measure of profitability – of 6% by 2025, a metric that lags its peers and may be hard to reach because of the risk associated with the restructuring plan, according to analysts at Jefferies.

The lender also won the backing of Saudi National Bank, majority-owned by the government of Saudi Arabia, which will invest up to 1.5 billion Swiss francs to take a stake of up to 9.9%.

Harris Associates, one of the bank’s biggest shareholders, was optimistic, welcoming the bank’s “aggressive” approach to improving.

But the incomplete nature of the plan and dilution of existing shareholders drew criticism, including from Vincent Kaufmann, head of Ethos, which represents shareholders holding more than 3% of Credit Suisse stock.

“We are critical of the entry … of a new strategic shareholder in view of the current valuation,” he said. “The new shareholder will obtain nearly 10% of the capital for only 1.5 billion francs.”

CREDIT SUISSE MUST ‘DRAW A LINE’

The latest revamp, aiming to overcome the bank’s worst crisis in its history, is the third attempt in recent years by successive CEOs to turn the group around.

“We all know we need to get this right,” said Lehmann, admitting that the bank had disappointed many. “We need to draw a line clearly.”

Once a symbol for Swiss reliability, the bank’s reputation has been tarnished by a series of scandals, including an unprecedented prosecution at home involving laundering money for a criminal gang.

Last year, the bank took a $5.5 billion loss from the unravelling of U.S. investment firm Archegos and had to freeze $10 billion worth of supply chain finance funds linked to insolvent British financier Greensill, highlighting risk-management failings.

Its deepening problems even put it on the radar of day traders this month, when a frenzy of wild speculation about its health sent its stock price to a record low.

On Thursday, as the bank’s shares tumbled, social media platforms such as Reddit or Twitter were largely silent.

But analysts and investors who spoke to Reuters expressed a sense of continued unease, with one shareholder, asking not be named, describing a “bleak picture overall”.

“Execution of this is highly dependent on economic forces that are out of their control,” said Chris Marinac, director of research at investment firm Janney Montgomery Scott.

“If we were in a great market, you could probably give the company some benefit of the doubt. But because it’s Fall of 2022 and there’s all this uncertainty … it’s really hard. And that’s the pond that Credit Suisse is swimming in.”