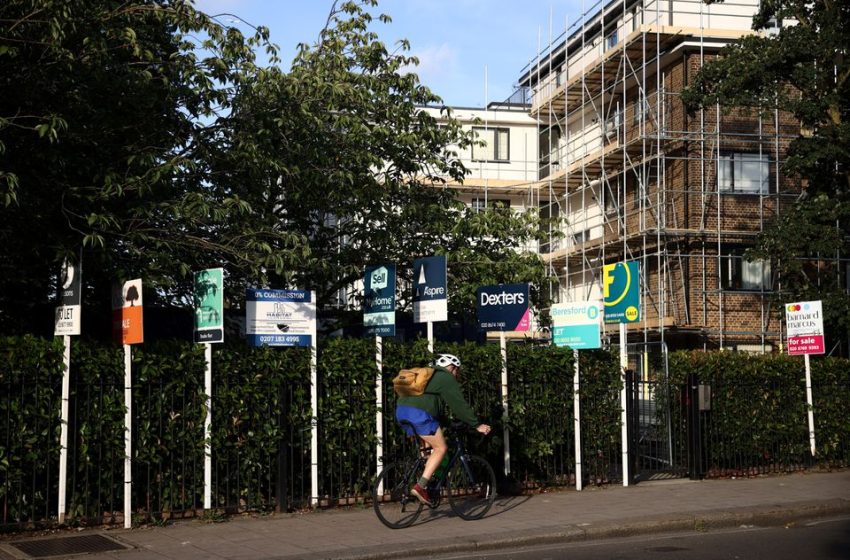 LONDON, Oct 10 (Reuters) – While British households head into a winter of soaring energy costs, a tumbling currency and nearly double-digit inflation, the country’s banks are in line for a handsome payday as mortgage prices spike after a decade of stagnation.

Banks are finding the home loan market stacked in their favour after years of low mortgage rates, but are also aware that bigger mortgage bills could spell trouble for cash-strapped customers.

Some investors and analysts are already questioning whether banks’ risk models are up to the task of identifying loans that will turn a profit from those which could cost lenders dearly in the long run.

“The problem is people refinancing at 6%, who were at say 2%, are going to suffer massive outflows of cash to support those mortgage payments,” said John Cronin, banking analyst at Goodbody.

“My worry is that the banks’ provision models don’t adequately reflect that affordability challenge in the context of low unemployment.”

The turmoil led banks to withdraw nearly 1,700 mortgage products in the space of a week – equivalent to around 40% of available products – sparking a rush among consumers desperate to secure the cheapest possible deals.

One senior banker said they had seen three times as many remortgage applications than normal in the week after Kwarteng’s mini-budget, and had to redeploy staff to cope with a spike in customer calls.

Some of the deals pulled were gradually reintroduced this week at rates between one to two percentage points higher.

Both the average two-year and five-year fixed-rate mortgage was above 6% as of Friday – for the first time since 2008 and 2010 respectively, data provider Moneyfacts said.

Those average rates were both around 4.75% on Sept 23 before Kwarteng’s fiscal giveaway, and were between 2-3% in October last year, Moneyfacts data showed.

Banks are raising mortgage rates to get ahead of expected Bank of England rate rises, with money markets pricing in benchmark rates hitting nearly 6% next year, based on Refinitiv data.

But the higher rates will hit borrowers hard.

“Everyone who rolls off fixed on to variable, or fixed on to a new fixed rate, is going to see their monthly payments go up so dramatically on top of what’s going on already around food and energy costs,” said Jim Leaviss, CIO of public fixed income at investment manager M&G.

“It is hard to see that we won’t see a substantial slowdown in economic activity over the coming months and indeed throughout 2023,” he added.

Mortgage payments as a proportion of gross household income were on average around 20% in June, according to BuiltPlace, a property market consultancy. They could rise to around 27% – the highest since the early 1990s – if mortgage rates were to rise to 6%, the consultancy said.

Mortgage market conditions were a “hot topic” of discussion at a meeting between bank executives and Kwarteng on Thursday – with affordability “the overriding concern”, according to a source briefed on the discussions. read more

Banks benefit from higher rates as they earn money from the difference between what they charge on lending and pay out on deposits.

Jefferies’ analysts estimated that three of Britain’s largest retail banks – NatWest (NWG.L), Lloyds (LLOY.L) and Barclays (BARC.L) – stood to collectively grow their revenue by 12 billion pounds ($13.43 billion) by 2024 due to expanding margins, including on mortgages. These banks reported 48 billion pounds in revenues in 2021.

Lloyds CEO Charlie Nunn told a banking conference last month – prior to Kwarteng’s mini-budget – the lender gained around 175 million pounds of revenue for every 25 basis point rise in rates – assuming it passed just half of the increases to savers.

Bank loan defaults have remained remarkably low through the pandemic and after, but much higher housing costs – piled on to soaring energy bills – could change that, analysts said.

British banks are expected to have “a very good next couple of quarters” before a “tough” 2023, bank analysts at RBC said in a note.

Taking into account the latest mortgage pricing, RBC calculated that mortgage payments would increase by between 470 pounds and 250 pounds per month for remortgaging households depending on whether they had refinanced before.

Private rents could also go up by 280 pounds per month if landlords passed on higher mortgage costs to tenants, the RBC analysts said.

The rise in mortgage rates will be a blow for millions of households’ finances, Sue Anderson, head of media at debt charity StepChange said.

“Our research suggests many households can ill afford this extra pressure – nearly one in two British adults are struggling to keep up with household bills and credit commitments, up from 30% in October 2021 and 15% in March 2020.”

British lenders have held talks with industry trade body UK Finance about forbearance options for struggling customers, the trade body told Reuters, adding it was ready to react as required.

The senior banker said that while mortgage defaults were still low – home loans were typically the last commitment consumers fell behind on – they were not complacent.

“We expect it to be larger scale than normal, and it’s not started yet.”