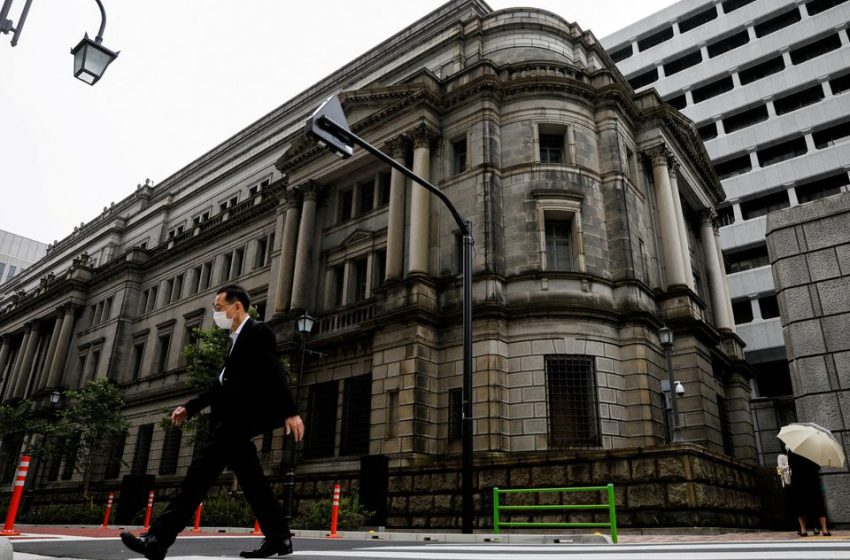 A man wearing a protective mask walks past the headquarters of Bank of Japan amid the coronavirus disease (COVID-19) outbreak in Tokyo, Japan, May 22, 2020.REUTERS/Kim Kyung-Hoon

TOKYO, March 9 (Reuters) – The crisis in Ukraine is giving the Bank of Japan a headache not facing other major central banks, forcing it to maintain a more dovish stance on monetary policy despite rising inflationary pressures and a dearth of tools to combat another economic downturn.

Unlike other advanced economies, Japan is still shackled by COVID-19 curbs that are delaying an economic recovery from the pandemic, with growth seen stalling this quarter.

The recent spike in oil and grain prices in the wake of Russia’s invasion of Ukraine also deals a particularly heavy blow to resource-poor Japan, while a projected slowdown in global growth threatens to cripple its export-reliant economy.

That means while inflation is set to approach or even exceed its 2% target in coming months, the BOJ will be forced to focus on risks of renewed economic weakness – a prospect policymakers are discussing, say four sources familiar with its thinking.

“It’s a huge risk to Japan’s economy that may push down growth this year,” one of the sources said of rising fuel costs.

“For the BOJ, the near-term focus would be on the damage to the economy, which means it has no reason to withdraw stimulus” even if inflation briefly hits its target, another source said.

The BOJ’s dovish stance makes it an outlier as the Federal Reserve and other major central banks eye raising interest rates to combat quickening inflation.

Some policymakers see similarities to Japan’s situation in 2008, when core consumer inflation exceeded 2% for three months due to soaring energy and commodity prices. The burden on households pushed the economy into stagnation, even before the collapse of Lehman Brothers jolted global markets.

What’s different this time is that the BOJ has no effective tools left to prop up growth and must swim against the tide of global central banks dialing back crisis-mode stimulus measures.

And the dilemma facing the BOJ could get even more complex.

Analysts expect core consumer inflation to approach 2% in April when the effect of cellphone fee cuts, which kept inflation at 0.2% in January, dissipates.

With prices soaring for various materials and a weak yen inflating the cost of imports, consumer inflation may stay around 2% for longer than in 2008 – when it slid back to around zero in three months.

While the government’s fuel subsidies may moderate the rise, SMBC Nikko Securities expects core consumer inflation to hit 2.4% in April and stay above 2% for the rest of this year.

Uncertainty over the fallout from the war may give Japanese firms an excuse to forgo wage hikes, which may hit consumption as households curb spending to make up for rising living costs.

“There’s not much to cheer about inflation reaching the BOJ’s target,” said Yoshiki Shinke, chief economist at Dai-ichi Life Research Institute. “If inflation stays near 2% and doesn’t slow much, household sentiment will sour and hit consumption.”

Unlike its peers which can slow or pause hikes if Ukraine hits growth, the BOJ has no levers to pull with interest rates below zero and its huge asset-buying programme maxed out.

While rising risks to growth may embolden doves in the BOJ board, they, too, are cautious of ramping up stimulus partly due to the rising cost and diminishing return of prolonged easing.

Years of heavy asset buying failed to fire up inflation to its 2% target, while ultra-low rates crushed bank margins and forced the BOJ to take a range of steps to ease their strain.

After peaking at 1.80% in 2007, the average interest domestic banks earn from new loans fell to 0.65% as of December last year, BOJ data showed.

Regional banks likely won’t be able to cover credit costs with operating profits if another shock to the scale of the Lehman crisis hits, according to a BOJ report released in September.

“Monetary policy is powerless to deal with situations like now, where inflation is spiking more on supply factors than strong demand,” said Nobuyasu Atago, a former BOJ official who is now chief economist at Ichiyoshi Securities.

“The BOJ can’t tighten policy but can’t ease, either. Having used up all its tools, there’s not much it can do.”