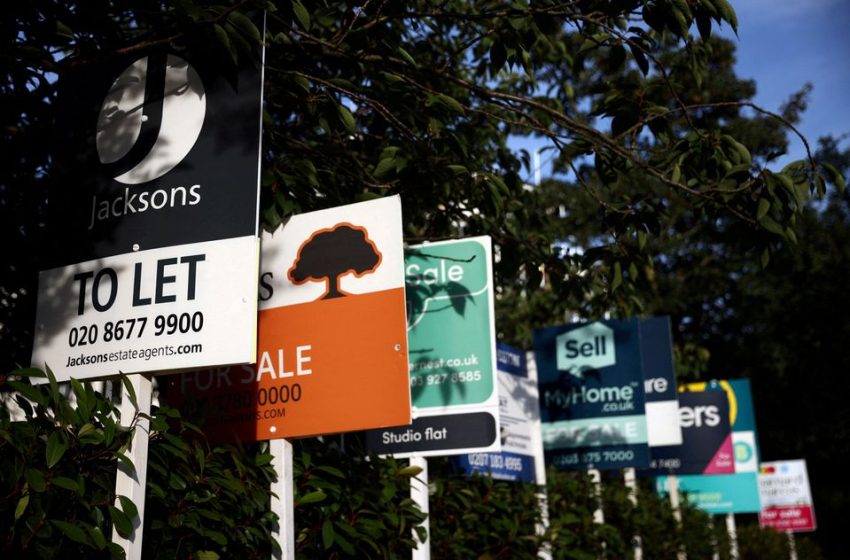 Market chaos unleashed by Truss’s vast unfunded tax-cutting plans in late September led lenders to withdraw around 1,700 mortgage products in the space of a week, before reintroducing them at rates 1-2 percentage points higher.

But as markets have stabilised and borrowing costs have fallen, the trickle of mortgage rate cuts has lagged behind.

Several key interest rate swaps – products that lenders use to lock in future rates before pricing fixed-rate mortgages – have fallen by between 1.3 and 1.4 percentage points from their Truss-administration peak, Refinitiv data shows.

“Lenders are able to get away with not passing cheaper rates on to mortgage customers, aided by the failure of Britain’s over-concentrated banking system to function like a competitive market,” said Simon Youel, head of policy and advocacy at Positive Money, which campaigns for a fairer financial system.

A spokesperson for banking lobby group UK Finance said the mortgage market was competitive, adding that lenders used a range of criteria to determine pricing.

Housing experts say further price drops should follow based on the market shift since Truss and her team’s departure.

Mortgage brokers say fixed-rate mortgage rates typically lag changes in swap rates, a trend which could be exacerbated this time as lenders focus on reintroducing products. The number of fixed-rate offerings is still down nearly a quarter from pre-Truss levels, according to Moneyfacts.

Lenders are under pressure to show they are treating customers fairly in the cost of living crisis, and have already faced criticism from consumer groups for not passing enough Bank of England rate rises to savers.

They also face the threat of a potential tax raid from Sunak’s government as it looks to plug a gap in the country’s finances.

Britain’s housing market has boomed since the initial impact of the COVID-19 pandemic, but squeezed household budgets exacerbated by more costly home loans looks set to plunge it into a downturn.

The country’s largest mortgage lender Lloyds, owner of the Halifax brand, said on Thursday it expected a mortgage market slowdown next year, and for house prices to drop 8%.

After years of cheap borrowing, mortgage prices had been climbing this year as the Bank of England ratcheted up benchmark rates. But this accelerated after Truss’s finance minister Kwasi Kwarteng laid out a disastrous “mini budget” on Sept. 23.

The average rate on a two-year fixed rate mortgage leapt as high as 6.65% by Oct. 20, Moneyfacts data shows, whereas prior to the budget it was 4.74%. Opposition politicians labeled the jump a “Truss premium” on mortgages.

The average two-year rate has since edged down 0.16 percentage points to 6.49% as of Thursday. Five-year mortgage rates have followed a similar pattern, Moneyfacts data shows.

Two-year interest rate swaps have fallen from a peak of 6.1% on Sept. 28 to 4.7% as of Thursday, according to Refinitiv data, greatly outpacing the dip in mortgage rates.

It’s a similar picture for five-year rates. Money market five-year swap rates are down 1.3 percentage points from their post-budget peak to 4.4%, whereas the average five-year fixed mortgage is so far just 0.16 percentage points cheaper than the Truss peak, down from 6.51% to 6.35%.

“There have been a couple of signs of reductions, some are significant,” said Mike Read, financial adviser at mortgage broker Prospect Tree Financial Services. “We probably need a few more weeks to see it filtering though.”

Santander’s British arm has been among the first lenders to lower mortgage rates this week, cutting some fixed rates by as much as 0.5 percentage points, according to Moneyfacts, while Yorkshire Building Society’s Accord brand cut rates by up to 0.53 percentage points.

Barclays finance chief Anna Cross told analysts after the bank’s earnings that the mortgage market was competitive and pricing should follow market conditions.

Lenders have said increasing mortgage rates in recent weeks was the rational thing to do as volatile money markets priced much higher future interest rates last month, so higher prices were needed to avoid them writing home loans at a loss.

Lloyds said on Thursday its future pricing would partly be determined by moves in money markets.

“We’ll have to see how these fare on a sustainable basis going forward,” the bank’s finance chief William Chalmers told reporters. “We will do our best to respond to customers in the most appropriate way.”