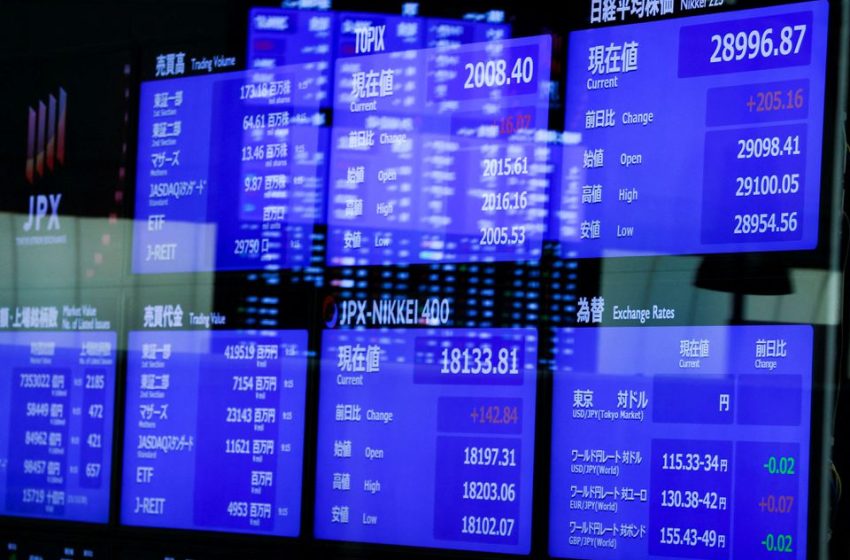 Monitors displaying the stock index prices and Japanese yen exchange rate against the U.S. dollar are seen after the New Year ceremony marking the opening of trading in 2022 at the Tokyo Stock Exchange (TSE), amid the coronavirus disease (COVID-19) pandemic, in Tokyo, Japan January 4, 2022. REUTERS/Issei Kato

LONDON, Feb 16 (Reuters) – World stocks crept higher on Wednesday for the second day in a row, while safe-haven assets such as government bonds and gold lost ground, despite Western scepticism over Russian claims of a troop pullback from Ukraine’s borders.

Markets are looking for any sign that one of the deepest crises in East-West relations for decades is starting to ebb and have seized on Moscow’s announcement of a partial pullback, even while U.S. President Joe Biden warned there was no proof read more .

“The surprise element is gone, the market has already priced in a certain deterioration in the situation,” said Peter Kinsella, head of FX at Swiss private bank UBP.

“Given where oil is trading, the rouble should be at 65-66 against the dollar so an awful lot is priced in and the same is true of equities in Europe,” Kinsella said, estimating that gold too was trading with a $100 premium to current fair value.

The rouble rose modestly to 75 per dollar after strengthening 1.3% on Tuesday .

Ukraine hinted Russia was behind a series of cyber attacks on Tuesday and Russia’s parliament urged the government to recognise two breakaway Ukrainian regions as independent. read more

All that would keep markets jittery, said Chris Weston, head of research at brokerage Pepperstone in Melbourne.

Gold, which on Tuesday hit the highest level since June last year at around $1,879 per ounce, is now around $1,856 . Brent crude rose $1 a barrel but stayed off seven-year highs hit on Monday

With geo-political tensions easing, focus may grow on inflation readings amid speculation the U.S. Federal Reserve and its peers may go faster and bigger with interest rate rises.

UK data showed consumer prices increased at the fastest annual pace in nearly 30 years, reinforcing chances the Bank of England will raises rates for a third meeting in a row. read more

It gave credence to those calling for a half-point rate increase by the Fed in March, something markets may get more clarity on when the Fed releases the minutes of its last meeting later on Wednesday.

A Reuters survey of economists leant towards a 25 bps hike but a quarter of those polled said a half-point move was likely.

The prospect of front-loaded, aggressive rate hikes has dramatically flattened government bond curves, with the gap between two-year and 10-year UK bond yields a short way off turning negative — the so-called inversion that often portends an economic slump .

Earlier this week, the Treasury yield curve hit its flattest levels since mid-2020 but has since steepened back to around 47 basis points as ebbing war fears lifted 10-year yields.

For some, the state of the curves shows central banks have fallen behind in their inflation fight and must act swiftly with policy tightening.

Kinsella said a 50 bps Fed move would be “a pretty big deal” but reckons it was doable, given where inflation is.

On currency markets, the dollar index shed some of its geo-political premium and slipped 0.2% to 95.8, pulling back from recent two-week highs