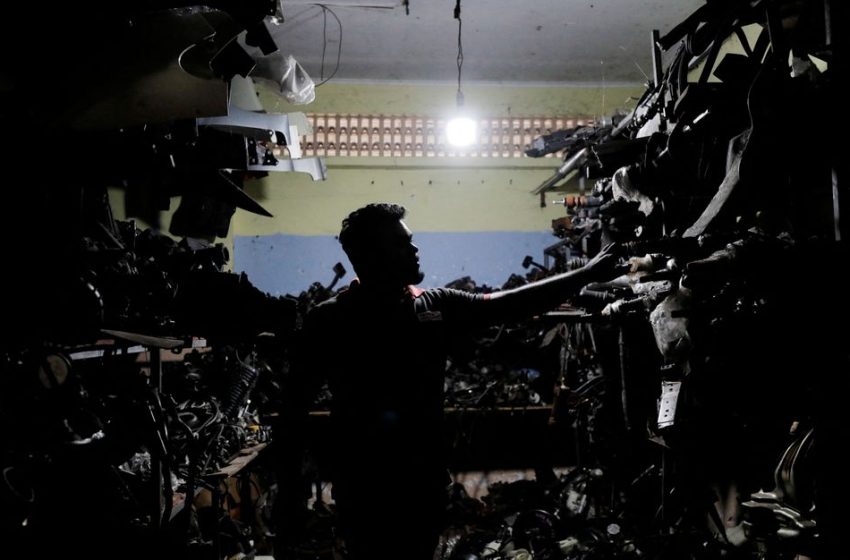 Supun Deshak, 23, a salesman at an area selling Japanese spare parts for vehicles, searches for a used part for the Suzuki Wagon R car inside the store room in a suburb town of Colombo, Sri Lanka February 17, 2022. REUTERS/Dinuka Liyanawatte

COLOMBO, Feb 18 (Reuters) – Car spare parts dealers in Sri Lanka’s main city of Colombo are receiving a steady stream of customers looking for what is fast becoming a prized commodity in the island nation – side mirrors for Suzuki’s compact Wagon R.

Suzuki’s boxy, five-seater vehicle is hugely popular in Sri Lanka, given its low running costs. With some 30,000 of the cars sold over the past four years in a nation that has relatively high road crash rates, replacement side mirrors are commonly sought in the spare parts shops scattered across the suburb of Nugegoda.

“Everyone is looking for Wagon R parts,” said Supun Deshak, a salesman at one store in the district where shop fronts are piled high with reconditioned spare parts.

The difficulty is that importers are struggling to source car parts because they are deemed non-essential imports under rules drawn up by the government to save dwindling foreign exchange reserves after the coronavirus pandemic hit.

Reserves have plummeted to $2.36 billion from $7.5 billion in January 2020. At the same time, the government faces a debt obligation of around $4 billion this year, and local banks are often unable to provide dollars that importers need.

The CMTA estimates imports of car spare parts will fall by around 30% in value terms this fiscal year, compared to pre-pandemic levels, primarily because of the foreign exchange shortages in the past few months.

Five auto dealers in Colombo told Reuters many spare parts were already in short supply, with only a trickle of new stock coming in from abroad, driving up local prices.

Exacerbating the problem are thieves looking to make a quick buck by stealing side mirrors of popular models like the Wagon R to sell in a thriving grey market, the dealers said.

The price of reconditioned Wagon R mirrors has surged by more than 35% from pre-pandemic levels to at least 30,000 Sri Lankan rupees ($148.5) per piece, the dealers said.

The economic crisis facing the country – its worst in a decade – has also triggered an escalation in second-hand vehicle prices.

Almost all car imports were banned in March 2020, followed by a stop on imports of other non-essential goods like airconditioners, refrigerators and video games consoles, as part of the government’s bid to deal with the financial strife.

That has pushed the cost of some second-hand vehicles up by more than 100%, the CMTA said. Sri Lanka does not mass produce any cars locally.

That’s added further pressure on the spares market as many car owners look to cash in on the price jump but first try to spruce up their vehicle with replacement parts, said Musthaq Nazeer of Azka Auto Supply, a small shop packed with car mirrors and lights.

As global automotive supply chain disruptions add another layer to the problem, the CMTA said it has asked the government to classify car spare parts as an essential item, along with some food and medicine, to increase imports.

“Every distributor’s out of many, many key parts,” De Zoysa said. “We’re turning away customers on a daily basis.”