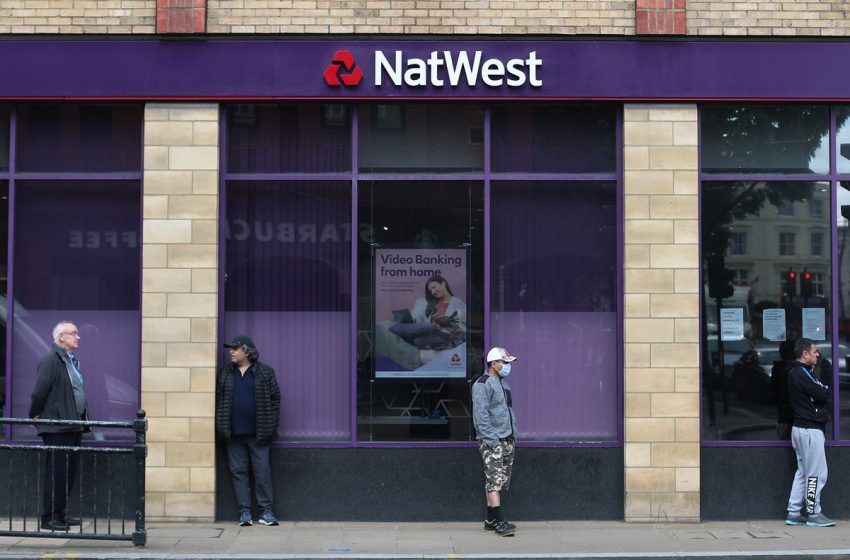 People maintain social distance while they queue outside a Natwest bank in Wimbledon, following the outbreak of the coronavirus disease (COVID-19), London, Britain, May 1, 2020. REUTERS/Hannah McKay

LONDON, Feb 18 (Reuters) – British bank NatWest (NWG.L) swung to a hefty profit on the back of the country’s economic recovery but said rising prices will make it harder to cut overheads, prompting it to lower its cost-cutting target.

Like their European peers, British banks have benefited from a rebound in consumer spending, lower than expected loan defaults and a buoyant housing market since the initial phase of the COVID-19 pandemic.

The improved picture meant NatWest could release 1.3 billion pounds of the reserves built up to deal with soured loans.

However, analysts warn that inflation at its highest in nearly 30 years threatens to squeeze household incomes and dampen the recovery.

“We’re really aware the challenges are to come for a lot of customers,” NatWest Chief Executive Alison Rose told reporters, adding that there had not yet been any increase in calls to the bank’s helplines from people struggling to pay their bills.

“People are phoning up and talking about it, but we’re not seeing any concerns coming through in our data as yet,” she said.

NatWest reduced its annual cost-cutting target to 3% from 4% for each of the next two years, citing inflation pressures and reinvestment.

The higher cost guidance is likely to lead to downgraded consensus forecasts for the bank, analysts at JPMorgan Cazenove said in a note.

The Bank of England’s two increases to interest rates in quick succession have broadly improved the outlook for banks because they make money on the difference between rates charged on lending and paid out on deposits.

NatWest is close to ending its 14 years of being majority owned by the state after the group’s 2008 financial crisis bailout. A string of stock sales has reduced the government’s holding to 51%, with further sales expected within months.

However, NatWest did not escape 2021 without setbacks. Profit was dented by 466 million pounds of litigation and conduct charges, including a 265 million pound fine for failing to prevent the laundering of 365 million pounds, some of it deposited at a branch in bin bags. read more

The bank’s veteran chairman, Howard Davies, told reporters he plans to remain in the role for the “foreseeable future”, in response to a media report saying the board was considering replacing him.

“Reports of my death have been much exaggerated,” Davies said. “There are no plans for me to leave at present and there is no process under way.”