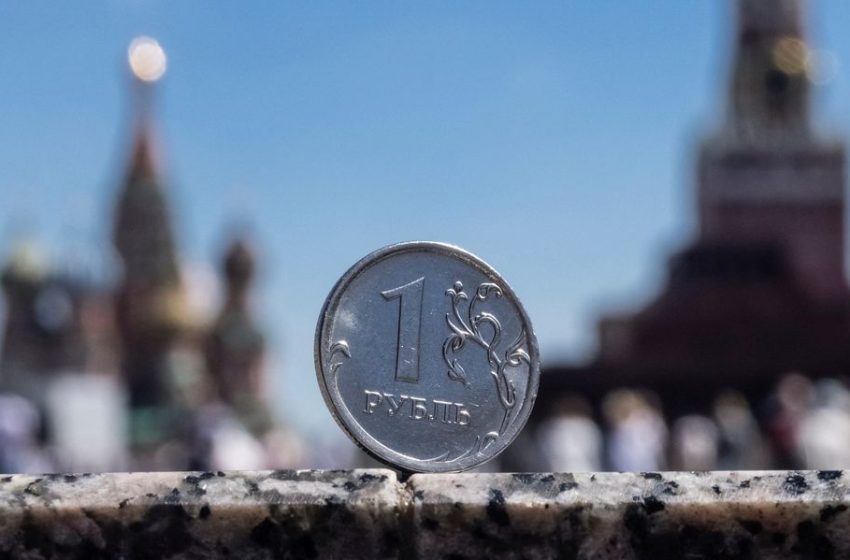 A Russian one rouble coin is pictured in front of a tower of the Kremlin and St. Basil's Cathedral in Moscow, Russia, in this illustration picture taken June 24, 2022. REUTERS/Maxim Shemetov/Illustration

MOSCOW, July 25 (Reuters) – The Russian rouble weakened in jittery Moscow trade on Monday, adjusting to the central bank’s decision to slash interest rates on Friday, and as a rouble-supportive tax-payment period reaches its peak.

The rouble lost ground on Friday after Russia’s central bank cut its key interest rate by a bigger-than-expected 1.5 percentage points to 8.0% and said it would study the need for more cuts as inflation slows and an economic contraction continues for longer than previously expected. read more

Analysts at the Freedom Finance brokerage said on Monday the rouble would likely trade in the 55-57 range against the dollar.

“The rouble’s weakening after the rate cut will be short-lived, in our view,” they said.

The rouble has become the world’s strongest-performing currency so far this year, boosted by measures – including restrictions on Russian households withdrawing foreign currency savings – taken to shield Russia’s financial system from Western sanctions imposed after Moscow sent troops into Ukraine on Feb. 24.

The rouble’s strength has vexed officials as it dents Russia’s income from exports of commodities and other goods priced in dollars and euros. The central bank has eased some restrictions, but many capital controls remain in place. read more

Month-end tax payments that usually prompt export-focused companies to convert part of their FX revenues into roubles have supported the currency in the last fortnight. Monday marks the peak of that period.

The tax period ends this week, so the dollar-rouble pair passing above 60 cannot be excluded, said Alor Broker in a note.

The prospect of Russia reinstating a budget rule that diverts excess oil revenues into its rainy-day fund, as well as the market anticipating currency interventions, are also playing against the rouble. read more

Reporting by Reuters Editing by Kirsten Donovan and Gareth Jones