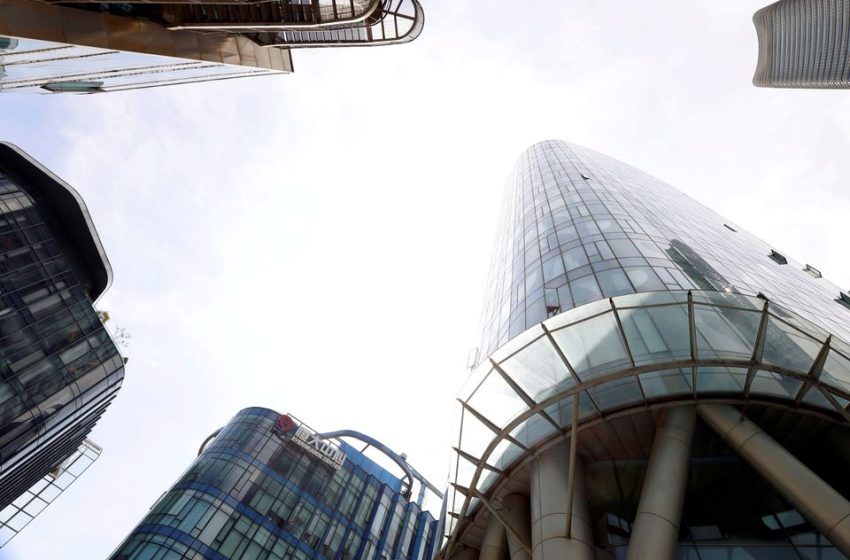 The Evergrande Center of China Evergrande Group is seen amid other buildings in Shanghai, China, September 24, 2021. REUTERS/Aly Song

BEIJING/HONG KONG, July 25 (Reuters) – China will launch a real estate fund to help property developers resolve a crippling debt crisis, aiming for a warchest of up to 300 billion yuan ($44 billion) in a bid to restore confidence in the industry, according to a state bank official with direct knowledge of the matter.

The move would mark the first major step by the state to rescue the beleaguered property sector since the debt troubles became public last year.

The size of the fund would initially be set at 80 billion yuan through support from the central bank, the People’s Bank of China (PBOC), the person, who declined to be identified due to the sensitivity of the matter, told Reuters.

He said state-owned China Construction Bank (601939.SS), will contribute 50 billion yuan into the 80 billion yuan fund, but the money will come from PBOC’s relending facility.

If the model works, other banks will follow suit with a target to raise up to 200 to 300 billion yuan, he added.

A key pillar of the world’s second-largest economy, China’s property sector has been lurching from one crisis to another, and has been a major drag on growth over the past year. A revolt by homebuyers this month heaped more headache for authorities. read more

Some analysts said a fund would only provide part of the solution.

“We don’t know details of the fund yet. If just 80 billion it’s not enough to solve the problem,” said Larry Hu, chief China economist at Macquarie. “I believe the fund would be part of the bigger package to solve the current debt and mortgage crisis, because it alone would not solve all the problems … we need a real estate recovery.”

Reuters has reached out for comment from China Construction Bank, the PBOC and China’s cabinet, the State Council.

Global investors are fixated on any twists and turns in China’s property market, which along with related sectors such as construction, accounts for more than a quarter of the country’s gross domestic product (GDP).

The source said the fund will be used to bankroll the purchases of unfinished home projects and complete their construction, and then rent them to individuals as part of the government’s drive to boost rental housing.

Such a move would underline the importance the central government attaches to providing more affordable homes for young people at a time when some local governments have been reluctant to build rental housing because land sales are a major source of income.

Henan-government backed Zhengzhou Real Estate, which set up one of the first local bailout funds in the country last week with state-owned Henan Asset Management amid the mortgage boycott, plans to use 20 billion yuan to acquire 50,000 units and turn them into rental housing, according to a notice by the Zhengzhou authorities this month seen by Reuters.

Turmoil in China’s property market, from the debt crisis, to credit tightening and the mortgage boycott, have battered confidence in the sector and seen authorities scramble to avert problems spilling into the broader economy.

“If the (fund) can be realized in the near future, it helps avoid more developers from defaulting and also helps to improve market sentiment as well as developers’ sales,” said Raymond Cheng, head of China research at CGS-CIMB Securities.

The latest news propelled the Hang Seng Mainland Properties Index (.HSMPI) more than 5% early on Monday, and it was up 3.5% in mid-afternoon trading. The CSI 300 Real Estate Index (.CSI000952) rose almost 2.0%.

Regulators and local governments would select the developers eligible for support from the fund, REDD said, adding that the fund could be used to buy financial products issued by the developers or finance state buyers’ acquisitions of their projects.

Beijing is also considering a national policy for issuance of special bonds for shantytown redevelopment, the report said.