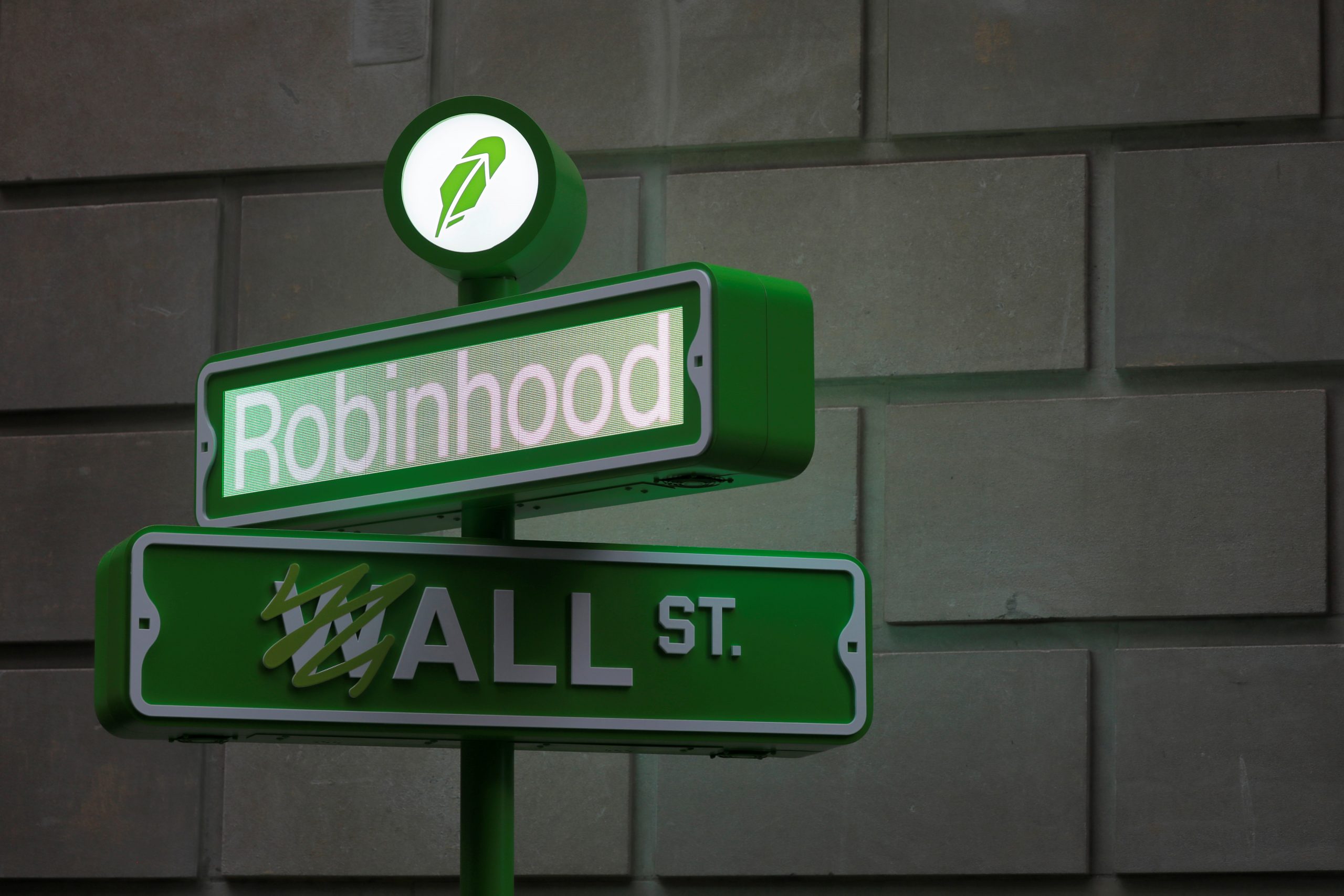 The logo of Robinhood Markets, Inc. is seen at a pop-up event on Wall Street after the company's IPO in New York City, July 29, 2021. REUTERS/Andrew Kelly

Robinhood shares surge 50%, as investors scoop up ‘the meme of memes’

Aug 4 (Reuters) – Shares of Robinhood Markets Inc (HOOD.O)rose more than 50% on Wednesday during a wild trading session as investors scooped up shares after its underwhelming stock market debut last week.

The online brokerage’s shares closed at $70.39, off the session high of $85 when the stock was up nearly 82%, with one analyst dubbing it “the meme of memes” in a reference to stocks popularized this year by retail investors congregating in online platforms such as Reddit’s WallStreetBets.

The stock has risen far above its initial public offering price of $38 per share and has logged its fourth straight day of gains.

Interest in the stock among retail investors soared on social media despite its weak market debut last week, when it fell below its IPO price. It was unclear exactly how much of Wednesday’s buying was from retail investors, though.On Tuesday, retail trading volume rose tenfold, helping the stock gain 24%, according to Vanda Research. Over the past 24 hours, Robinhood was by far the most mentioned stock on WallStreetBets according to sentiment tracker SwaggyStocks.

“We know from meme stock trading that’s happened over the last several months that when there’s a lot of activity on social media, sometimes that will drive a stock higher or lower,” said Randy Frederick, vice president of trading and derivatives for Charles Schwab in Austin, Texas.

Wednesday marked the first day that investors could trade options on Robinhood shares, another way of betting on the stock. In recent months, options trades by retail investors have contributed to outsize moves in shares of companies like GameStop and AMC Entertainment Holdings. read more

Some 293,000 contracts changed hands by 3:15 p.m. (1915 GMT), about evenly spread between bearish puts and bullish calls, putting it on pace for one of the most active options markets debuts ever, according to Trade Alert data.

“I am surprised by how active it is, … but then this is the meme of memes,” said Henry Schwartz, head of product intelligence at Cboe.

Implied volatility on the stock’s August options stood at around 240% — indicating that traders expect the stock to move about 15% every day, with a greater-than-30% daily move once every 20 days, according to a note from Christopher Murphy of Susquehanna Investment Group.

Wood’s Ark Fintech Innovation ETF (ARKF.P) bought another 89,622 shares of Robinhood on Tuesday, and the stock now amounts to about 0.9% of its portfolio, according to a summary of the fund’s daily trading.

“People are trying to jump on the back of Cathie Wood’s vote of confidence in Robinhood shares,” said Thomas Hayes, managing member at Great Hill Capital in New York.

“The catalyst was certainly Cathie Wood putting in a sizable position after everyone was downbeat after the IPO.”Reporting by Sruthi Shankar and Medha Singh in Bengaluru; Sinead Carew and Saqib Ahmed in New York; Additional reporting by Noel Randewich in San Francisco; Editing by Shounak Dasgupta, Shailesh Kuber and David Gregorio