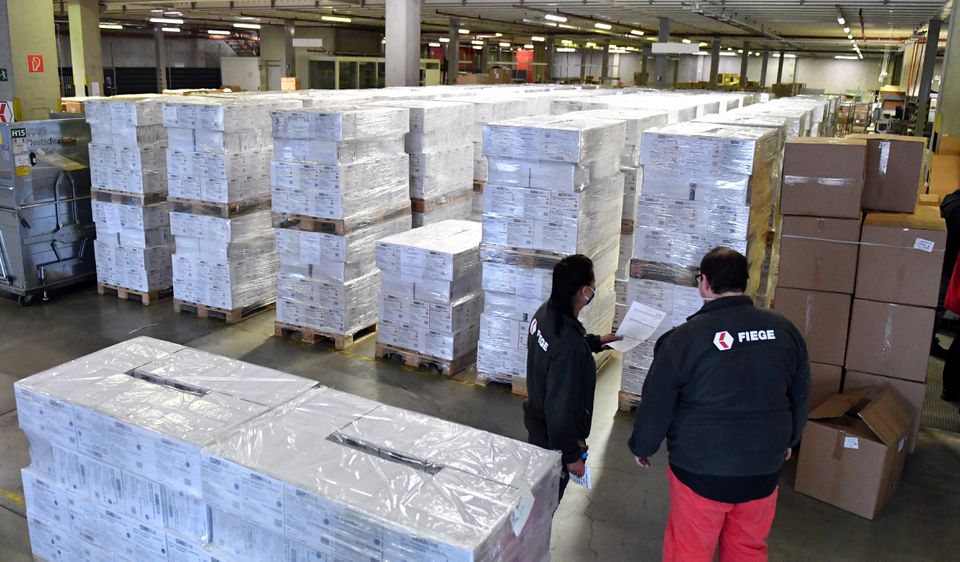 Employees work in the warehouse for medical equipment of logistics company Fiege in Apfelstaedt near Erfurt, Germany, April 3, 2020, as the spread of the coronavirus disease (COVID-19) continues. Martin Schutt/Pool via REUTERS

Like others in the sector, Dutch group Raben has seen increasing interest from firms looking to establish supply chains near core Western European markets to avoid costly disruptions such as those caused by COVID-19.

Privately-held Raben Group– which operates in 13 European countries serving industries including retail and automotive — expects rising costs elsewhere in emerging Europe to drive growth in southeastern states and the Balkans.

Raben and other industrial warehouse firms said they were in talks with companies looking to shift some operations from Asia and elsewhere but it was too early to share details.

“Companies will return to Europe from Asia. We need to be ready to take over when this happens,” Raben CEE director Tomasz Niezwicki told Reuters.

He said the company would open three new warehouse locations in Romania this year to add to its portfolio of seven as it speeds up its expansion plans.

Setting up in European Union nations Romania and Bulgaria represents a big selling point for these and neighbouring countries like Serbia where it is often cheaper and easier to get projects running, company officials and analysts say.

The region’s deep pool of skilled labour and less burdensome permit requirements to build new facilities are helping to lure manufacturers away from more established bases like the Czech Republic, warehouse and logistic operators say.

Improved roads and other infrastructure in Romania and surrounding countries as well as developments like Britain’s exit from the EU and shifting relations with China have boosted their prospects, they add.

“These have the potential to bring in some manufacturing or logistics activities in Romania, particularly if we regard that labour costs in manufacturing, for instance, are comparable between Romania and China,” real estate company Colliers International said in its 2021 outlook for the market.

Foreign investors have also been drawn by yields on industrial and logistics properties that hovered in 2020 between 8-10% for Romania and Bulgaria and 5-7% in Poland, the Czech Republic, Slovakia and Hungary, Colliers said, compared with 4.5% in Germany or France.

Wages around three times less in Serbia and about half as much in Romania and Bulgaria compared with the Czech Republic are helping to attract manufacturers, JLL real estate consultancy’s (JLL.N) Andrew Peirson said.

“The big manufacturing requirements are moving south,” Peirson, the consultancy’s general manager for the Czech Republic told Reuters. “Bulgaria, Romania and Serbia – they will impact the whole of the region.”

While central Europe remains attractive for retail logistics and warehouse businesses due to proximity to bigger markets like Germany, growth from online retailers such as Romania’s eMAG are also helping to boost warehouse demand.

However, southeastern Europe is growing at a faster clip and closing the gap. This has pushed industrial property developer CTP (CTPNV.AS) to expand in the region.

The company — which posted a 73% year-on-year rise in first quarter profit to 98.5 million euros ($120 million)– acquired 95,000 square metres of buildings from Australia’s Cromwell Property Group last November in the biggest deal in the Romanian logistics market in 2020.

CTP Chief Financial Officer Richard Wilkinson said the company planned to boost its holdings in Romania to near 2 million square metres by the end of 2021, part of an effort to grow its whole portfolio to 7.5 million metres this year, from just under 6 million held at the end of 2020.

“We see strong demand in (Romania, Bulgaria and Serbia),” he said. “We are starting to see companies looking to come back from Asia and I expect that trend to continue.”

The industrial and logistics sector in Romania — southeastern Europe’s biggest economy — grew by 43% in the first quarter from a year earlier with 264,000 square metres of new space leased to total 5.16 million square metres, according to real estate consultancy CBRE.

Dacia’s (RENA.PA) deal to renew a 68,000 square metre warehouse lease marked Romania’s biggest deal of the first quarter. Another 600,000 square metres of industrial space are expected to be built in what is shaping up to be a record year, said CBRE Romania Managing Director Razvan Iorgu.

“Last year retail drove the market and this year we are betting on manufacturing,” he added.