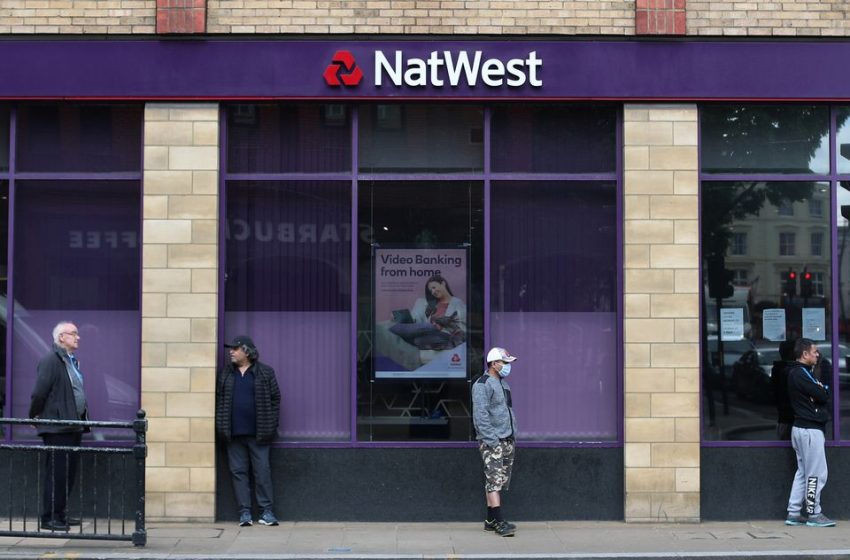 People maintain social distance while they queue outside a Natwest bank in Wimbledon, following the outbreak of the coronavirus disease (COVID-19), London, Britain, May 1, 2020. REUTERS/Hannah McKay

LONDON, Oct 28 (Reuters) – NatWest’s shares fell as much as 9% on Friday after the British bank warned of rising costs, and as its third-quarter results were hit by a deteriorating UK economic outlook that prompted an increase in bad debt provisions.

Britain’s economy is facing recession at a time when the Bank of England is raising interest rates to curb double-digit inflation, squeezing the finances of households and businesses.

NatWest set aside an additional 247 million pounds to reflect the gloomy outlook and said its costs next year would no longer be stable, in a sign of how soaring inflation is impacting bank finances.

The bank was also hit by a 652 million euro ($650 million) loss in its Ulster Bank business in Ireland – which it is in the process of exiting. NatWest said this was mainly due to a revaluation of its loans.

Pre-tax profit came in at 1.1 billion pounds ($1.27 billion) for July-September, slightly below analyst forecasts and unchanged on the prior year.

The lender’s shares were last down 8%, against a benchmark FTSE index down 1% (.FTSE).

“While the bank is in a reasonable position for now, we are expecting an arduous downturn in the economy by the middle of next year, which will rock the boat,” said Sophie Lund-Yates, analyst at Hargreaves Lansdown.

Analysts at JPMorgan said in a note that NatWest’s warning on costs could also lead to downward revisions for its profitability.

The bank said its bad loan provisions reflected its more negative view of its existing economic scenarios, and it now expects house prices to fall 7% next year. Rival Lloyds adopted a similarly bearish view on Thursday, predicting an 8% drop.

NatWest CEO Alison Rose said the bank had not yet seen increased signs of financial distress from customers, but said the bank was closely monitoring the situation.

On costs, Rose told reporters the bank’s changed guidance partly reflected the need to increase pay for staff to help them cope with inflation.

The contagion hit mortgage markets, leading lenders to withdraw around 1,700 products in the space of a week before reintroducing them at higher prices.

Market conditions have since calmed down, but lenders have been slow to pass on the benefits to customers.

Rose told reporters NatWest cut some fixed rates on Friday, adding: “It’s important that we make sure we pass those through.”

NatWest cut rates on several products for existing customers by up to 0.6 percentage points, a spokesperson said. Data provider Moneyfacts said as the changes did not affect new customers it would not impact its compiled average rates.

Banks are wary that Sunak may slap extra taxes on the sector, as he seeks to plug a gap in the country’s finances.

“Banks based in the UK already pay a considerable amount of tax… It’s important that the financial services sector remains competitive and investible,” Rose said.

State-backed NatWest returned to majority private ownership earlier this year, more than a decade on from its 45 billion pound taxpayer bailout in the global financial crisis.

Banks in general are benefiting from higher rates as they profit from the difference in what they charge on lending and pay out on deposits. But higher interest rates are a double-edged sword as they also squeeze borrowers and raise the risk of loan defaults.

Higher rates helped to boost the bank’s income by a fifth to 3.2 billion pounds.

NatWest said it still expects to reach its return on equity target – a key measure of profitability – of 14-16% in 2023, adding that rising income would help make up for higher costs.