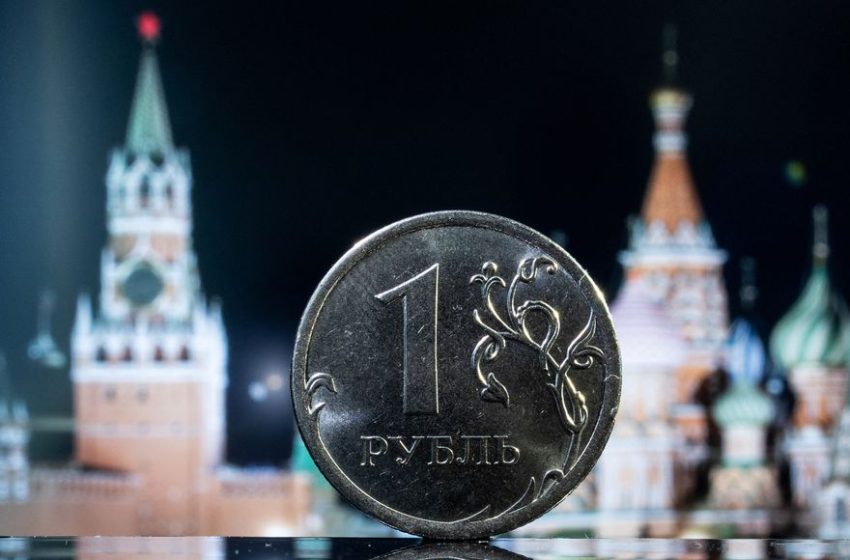 A Russian 1 rouble coin is pictured in front of a monitor showing St. Basil’s Cathedral and a tower of Moscow’s Kremlin in this illustration taken June 24, 2022. REUTERS/Maxim Shemetov/Illustration

June 27 (Reuters) – The Kremlin on Monday rejected claims that it has defaulted on its external debt for the first time in more than a century, after a grace period on $100 million interest payments ran out. read more

In a call with reporters, Kremlin spokesperson Dmitry Peskov said Russia made bond payments due in May but the fact they had been blocked by Euroclear because of Western sanctions on Russia was “not our problem”.

Russia has struggled to keep up payments on $40 billion of outstanding bonds since its invasion of Ukraine on Feb. 24, as sweeping sanctions have effectively cut the country off from the global financial system and rendered its assets untouchable to many investors.

Russia has long said it has the money to pay, calling the default artificial as sanctions block foreign bondholders from receiving the cash. On Monday, a U.S. official said the default showed how dramatically the sanctions were impacting Russia’s economy.

Around a half of Russian gold and foreign exchange reserves – some $300 billion – were earlier blocked by western sanctions imposed after Moscow sent troops to Ukraine.

“Our position is well known. Our reserves are blocked unlawfully and all attempts to use these reserves will also be unlawful and would amount to outright theft,” Peskov said.

Euroclear did not immediately respond to a request for comment.

In another step to widen sanctions on Moscow, the British government said on Sunday that Britain, the United States, Japan and Canada would ban new imports of Russian gold. read more

When asked if Russia would be able to re-direct its gold to Asia where the main consumers are located, Peskov said that the global precious metals market is “quite large.”

“As with all other goods, of course, if one market loses its appeal, there is a redirection to where conditions are more comfortable,” Peskov added.

Russia invaded Ukraine on Feb. 24 in what the Kremlin calls a “special military operation” to rid the country of far-right nationalists and ensure Russian security.

Kyiv and the West dismiss that as a baseless pretext for a war of aggression that has killed thousands.