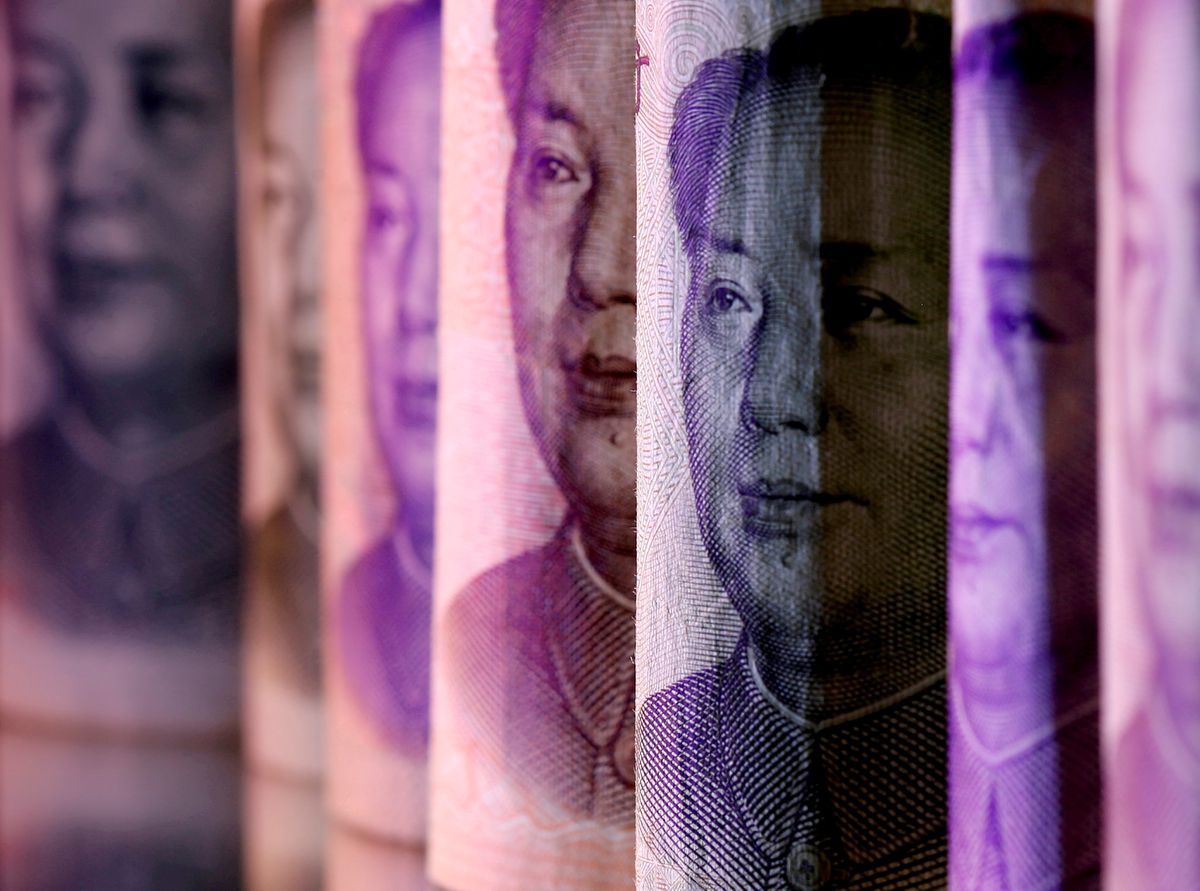 LONDON, July 27 (Reuters) – International investors were feeling bruised and uncertain on Tuesday as a third day of heavy selling hammered China’s top tech stocks and began to seep into currency and debt markets.

China’s rise in global indexes in recent decades means money managers are more exposed than ever as Beijing seeks to reduce the dominance of some of its tech, property, ride-hailing and even private education firms.

Tuesday’s falls included a 9% plunge in internet giant Tencent, its worst in a decade, as its WeChat social network suspended user registrations while it underwent an upgrade “to align with all relevant laws and regulations”. read more

China’s blue-chip index (.CSI300) dropped to its lowest in nearly eight months, the yuan hit its lowest since April and Hong Kong slumped 5%.

In U.S. trading, the Nasdaq Golden Dragon China (.HXC) benchmark of Chinese tech stocks listed in New York fell another 6%, taking its losses since Friday past 20% and wiping $500 billion off its value.

“The spectre of state intervention into controlling the private sector has created a crescendo of panic selling,” said Sean Darby at Jefferies, calling it an iron fist in a velvet glove.

“A key question is what are policymakers in China trying to achieve?” Russell said. One thing was clear, he said: Beijing wanted to prevent companies becoming too dominant.

Monday’s sell-off was triggered by a clampdown on the $100 billion private education industry which sent shares of tutoring providers such as New Oriental Education & Tech Group (9901.HK) and Scholar Education Group (1769.HK) down more than 45%.

The sell-off is creating a “risk is that you get some kind of contagion across all Chinese equities … and investors will get really cautious,” said Rand Wrighton, head of international equities at Barrow Hanley Global Investors.

Tencent and Alibaba account for 10% of MSCI’s $8 trillion Emerging Market index (.MSCIEF). Chinese firms make up around 37% of the index, up from 17% a decade ago.

Investment banks estimate U.S. investors hold about $1 trillion of Chinese internet and tech stocks, or have U.S. listings known as American Depositary Receipts (ADRs) that Washington has also been clamping down on over the past year.

“It’s definitely a reminder to investors of the risks in emerging markets,” said Gael Combes, head of fundamental research equities at Unigestion.

While the market had known state-owned enterprises were used to pilot the economy, “the tech, internet and fintech companies were valued close to the valuation we’d have in the U.S., and so didn’t discount the regulatory risk,” he said.

Chinese 10-year government bond futures were down 0.35%. Bonds in property company Evergrade have now halved in price since late May amid concern about its future.

On contagion risk, investment firm Mirabaud underlined that other than Tencent’s founders, only one Chinese institution is on the list of its top 20 shareholders.

Alibaba’s biggest shareholder is Softbank, the U.S. ADR top 20 list is full of U.S. and international funds, and the Hong Kong listing is also dominated by international institutions. There is also no Chinese institution in the top 25 holders of the third of the BATs trio, Baidu.

Arnim Holzer, strategist with EAB Investment Group, is advising clients to hedge their portfolios against further China-related volatility in a number of ways, including options positions that would profit from swings in emerging market bonds.

“While I think we may be approaching a bottom in some of the hard-hit Chinese stocks, there is still a likelihood that investors may need to de-risk some of their technology-oriented portfolios,” he said.Additional reporting by Medha Singh, Danilo Masoni, Sujata Rao and Karin Strohecker in London and Rodrigo Campos, Saqib Ahmed and David Randall in New York; editing by Timothy Heritage