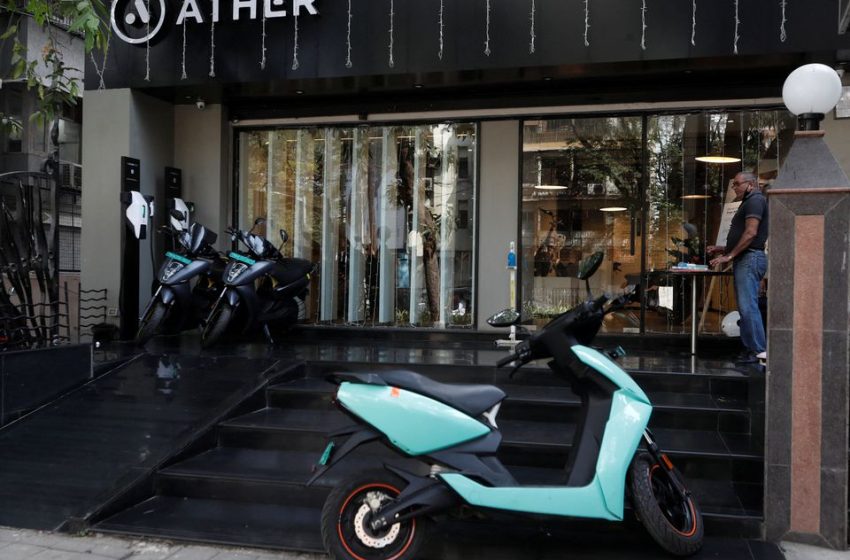 NEW DELHI, Jan 28 (Reuters) – Ather Energy, India’s top electric scooter maker by revenue, is raising funds to ramp up annual production to one million scooters over the next three years amid a surge in demand, the startup’s co-founder and chief executive told Reuters.

Ather, which counts Tiger Global and Indian bikemaker Hero MotoCorp (HROM.NS) as investors, has raised about 12 billion rupees ($160 million) since its inception in 2013 and is in the process of raising more, Tarun Mehta said in an interview.

“Our plan was to not raise more capital and focus on growing the brand, but the rate of transition to electric and the pace at which the supply chain and capacities need to ramp is way faster than what we thought a year back,” Mehta said.

He declined to comment on the amount the company plans to raise. A source with knowledge of the plans said Ather was looking for about $133 million. Of this, it has already raised $56 million from Hero.

Even so, electric models made up just 1% of total Indian motorcycle and scooter sales of 14.5 million in 2021. The government wants this to reach 40% by 2030 as it looks to reduce its oil import bill and curb pollution.

Ather is also building its war chest amid rising competition from startups like Softbank Group-backed (9984.T) Ola Electric, which recently raised $200 million, as well as from India’s traditional bikemakers like Hero, Bajaj Auto (BAJA.NS) and TVS (TVSM.NS), which are speeding up their clean mobility plans.

Over the next three years, Ather plans to increase its annual production capacity to one million scooters from 400,000 by the end of 2022, install 5,000 fast chargers across India, develop new products and increase its network to 600 stores, Mehta said.

The biggest challenge he sees is growing the supply chain and convincing suppliers to invest ahead of time in electronic components like motors and controllers for India’s nascent electric vehicle market.

The required investment and pace of expansion will also push back Ather’s profitability, which Mehta expects is now another two years away.

“The demand is massive, and the Indian market has been supply constrained,” he said.

Ather currently manufactures about 5,000 electric scooters a month and builds its own lithium-ion battery pack. Mehta expects to expand production to 20,000 scooters a month in 2022, helped by a surge in demand from smaller cities.

His longer term vision is to invest in businesses that help increase the use of clean energy.

“The next thing that excites me is trucks and buses – it is low volume but massive energy consumption,” he said.