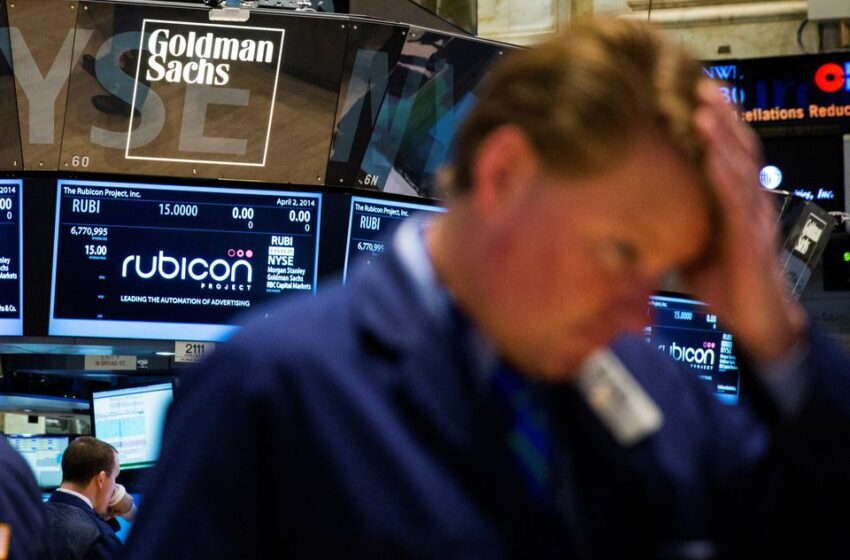 The Goldman Sachs logo is pictured above a trader on the floor of the New York Stock Exchange shortly after the opening bell in the Manhattan borough of New York April 2, 2014. REUTERS/Lucas Jackson

NEW YORK, Jan 4 (Reuters) – Goldman Sachs Group Inc’s top dealmakers are bullish on a recovery in global mergers & acquisitions (M&A) in the second half of 2023 despite a slowdown in economic growth and a weak credit market.

As economic forecasts turn gloomier, executives at the Wall Street powerhouse – including Dan Dees and Jim Esposito, who jointly run its global banking and markets division – said they are primed for a recovery when financing markets ease up, potentially as early as the second half of 2023.

The projections come after global M&A values slumped 36% to $3.78 trillion in 2022, from a record $5.91 trillion in 2021, according to Dealogic data. Banks, including Goldman, have cut jobs as activity slumps.

In a series of interviews with Reuters in recent weeks, top Goldman dealmakers who have been at the firm for more than two decades apiece said there are plenty of reasons for global deal activity to pick up.

Big investors are sitting on piles of cash preparing to fund transactions, and large companies earning solid profits are looking to diversify their businesses – but they are waiting for economic uncertainty to fade, the bankers said.

“I remain quite bullish, maybe not on the first quarter, but certainly as we go forward,” said Stephan Feldgoise, global co-head of M&A. Still, there are “clear headwinds in the first part” of 2023, he said.

Mark Sorrell, Feldgoise’s counterpart in London, sees corporate clients jumping on deals when financing is available because their underlying motives are still intact, such as gaining new customers, new products or geographic expansion.

Companies are staying on the sidelines because their creditors have pulled back from making riskier loans for buyouts as interest rates rise, but that could change rapidly, he said.

“When the financing market comes back, we don’t know when it will happen, but it will happen because of the amount of liquidity in the system, we think transaction volumes will and activity will recover,” Sorrell said.

The resurgence may be “quicker than people expect,” he said.

If markets recover, Goldman’s investment bankers stand to gain. The company has been the top global M&A adviser by revenue for the past 20 years, followed by JPMorgan Chase & Co, according to Dealogic data.

Despite that position, Goldman is not immune to a slowdown. Its investment-banking division accounted for just 13% of the company’s revenue in the third quarter, shrinking from 27% a year earlier and 23% in the third quarter of 2018, when CEO David Solomon took the helm.

The bank is preparing to cut thousands of employees in the new year, intensifying an earlier round of about 500 layoffs in September, Reuters reported earlier. Bonuses will also be slashed.

Goldman’s leaders said staffing levels were being adjusted to fit the economic environment, and in some cases, employees were being reassigned to more active areas.

The bank sees opportunities in advising clients who are being targeted by activist investors, or fintech companies open to suitors after their valuations plunged, said Russ Hutchinson, the bank’s chief operating officer of global M&A.

The fortunes of Wall Street’s dealmakers hinge to a large extent on whether the leveraged loan market will reawaken after a lull last year. Some observers have drawn parallels to the global financial crisis, when plunging corporate valuations and a recession triggered by a collapse in the housing market froze the leveraged buyout (LBO) market.

The current stress in the credit market is vastly different from 2008, said Esposito, Goldman’s co-head of global banking and markets. During the crisis, the banking industry had more than $700 billion of stalled LBO exposure at its peak, which took 12 to 18 months to clear.

Today, “there’s probably between $100 and $125 billion …  It’s an almost inconsequential number compared to 2008, and equally importantly, the credit markets are so much deeper.”

The market stress means lenders are less willing to finance deals because they are saddled with tens of billions of dollars of so-called “hung debt” that they are unable to sell on to investors.

But for all the market turbulence, Goldman veterans remain confident.

“When you go through periods of volatility, you know it creates opportunity,” Dees said.