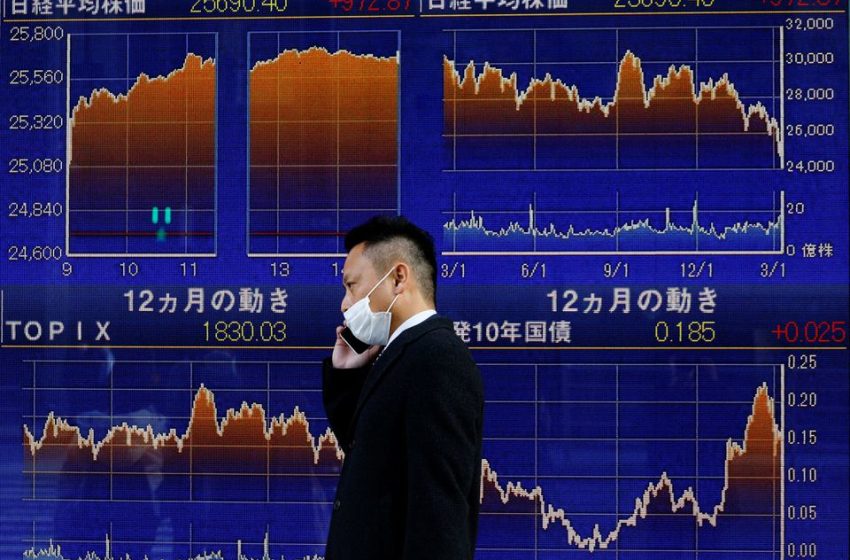 A man wearing a protective mask, amid the coronavirus disease (COVID-19) outbreak, walks past an electronic board displaying graphs (top) of Nikkei index outside a brokerage in Tokyo, Japan, March 10, 2022. REUTERS/Kim Kyung-Hoon

LONDON, May 20 (Reuters) – The trillions wiped off global markets in recent weeks has triggered a contrarian ‘buy’ signal from BofA’s closely-followed ‘Bull & Bear’ sentiment indicator, while emerging markets are seeing their toughest time since the peak of the COVID crash.

Fears that inflation and fast-rising rates will send major economies into recession have sent global markets in a downward spiral with global equities (.MIWO00000PUS) losing close to 18% since the beginning of the year. It is the worst start to a year on recent record.

The week saw the largest ouflows from emerging markets debt since March 2020 and the biggest withdrawals from high yield bonds in 14 weeks, at $6.1 billion and $4.3 billion respectively BofA noted, citing EPFR data.

Across the equity space, Europe, which is being hit hardest by the Russia-Ukraine war, suffered a fourteenth week of withdrawals.

All in all, $5.2 billion exited world equities funds, while a seventh week of outflows from global bond funds saw $12.3 billion leave.