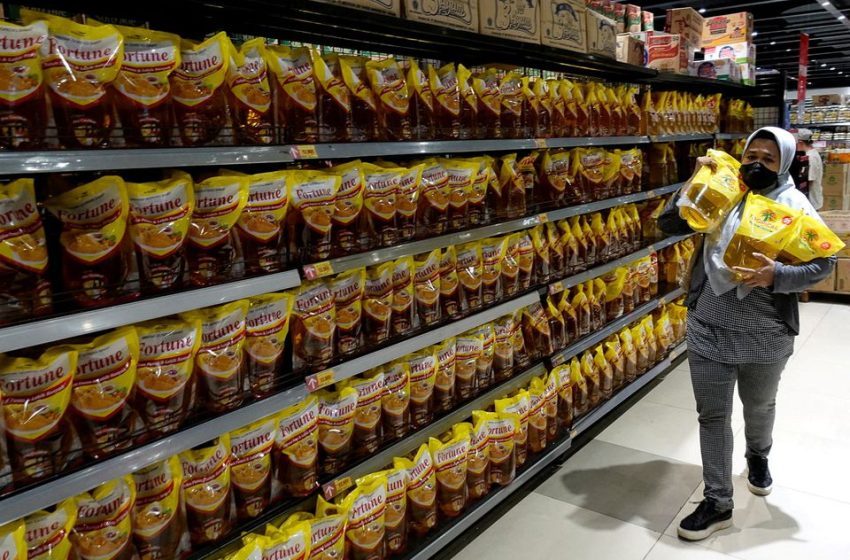 A woman shops for cooking oil made from oil palms at a supermarket in Jakarta, Indonesia, March 27, 2022. REUTERS/Willy Kurniawan

May 24 (Reuters) – Indonesian President Joko Widodo has agreed to allow palm oil exports to resume after a three-week ban, though it is unclear how rapidly shipments will resume given accompanying rules aimed at securing domestic supply.

The country is the biggest exporter of palm oil – used in everything from margarine to shampoo – accounting for about 60% of world supply.

WHAT ARE THE LATEST CHANGES?

Indonesia reopened exports for crude palm oil (CPO) and some of its derivative products from May 23 but export permits will be required to show companies have met a so-called Domestic Market Obligation (DMO).

The government has yet to make public details of the DMO, but chief economics minister Airlangga Hartarto said the target was to keep 10 million tonnes of cooking oil at home.

Asked what portion of palm oil production would be sold domestically under the DMO, Hartarto said it would be 30% with a target to lower it to 20%. read more

WHY HAS INDONESIA BEEN SEEKING TO CONTROL PALM OIL EXPORTS?

Since November, authorities have unrolled a bewildering array of measures including subsidies, export permits and a palm oil levy as well as export bans to contain cooking oil prices.

However, this has failed to bring the cost of the household necessity made from palm oil into line with a government target of 14,000 rupiah ($0.9554) per litre. read more

Nonetheless, Indonesia removed the export ban, claiming prices were heading lower and following protests by farmers and calls by lawmakers to reconsider the policy.

Trade ministry data showed as of Monday cooking oil averaged 16,900 rupiah per litre, down from an average of 18,000 rupiah in April but up from 13,300 rupiah in July.

While there has been anger over Indonesia’s policy flip-flops among some major buyers in countries such as India and Bangladesh, analysts do not expect many to cut off buying. read more

Traders in India said Indonesian sellers have started to accept new orders, but were not rushing to sign business before understanding the DMO rules.

Palm oil companies are awaiting further guidance from the government, with authorities holding meetings with industry participants to explain changes.

WHAT HAS BEEN HINDERING COOKING OIL DISTRIBUTION?

Still, red tape has also been blamed, with palm refiners wary of releasing cooking oil supplies because of a complicated process of getting subsidies. On Tuesday, a government official said the subsidy would be replaced by another policy to control prices. read more

The government has also assigned state food procurement agency Bulog to distribute more cooking oil, but last week it said regulations were needed to allow it to start.

Asked about distribution issues, an industry ministry official said there were many components but logistics and transport limitations were key obstacles.

WHAT WILL THE ENDGAME BE?

As was the case with Indonesia’s ban of coal exports in January, the government has eased the ban on palm oil shipments in less than a month.

Still, despite the ban costing hundreds of millions of dollars in lost state revenue, the president appears ready to make further policy changes if needed, particularly after his approval rating hit a six-year low in a recent survey. read more

He has appointed senior minister Luhut Pandjaitan to oversee cooking oil distribution in the populous islands of Java and Bali.

“The objective is for bulk cooking oil to reach the price level targeted by the government, and to be evenly and amply distributed,” said Jodi Mahardi, a spokesperson for Luhut.