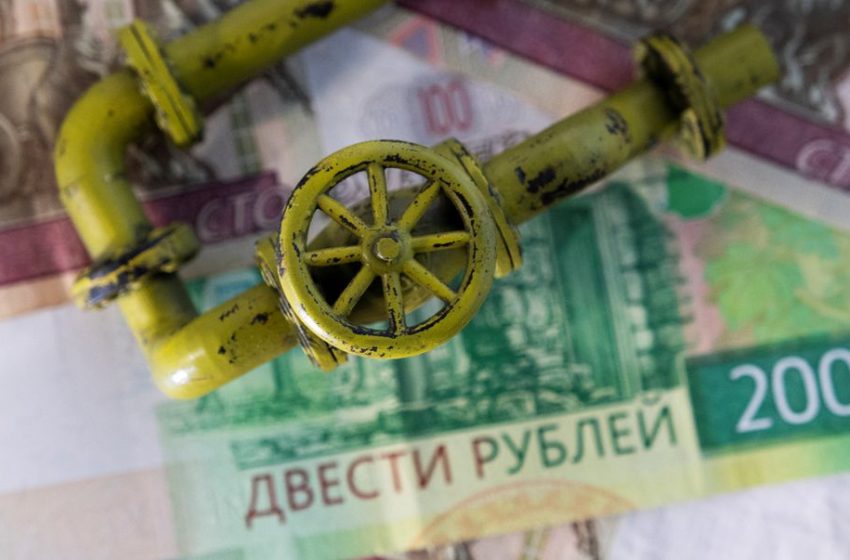 A model of the natural gas pipeline is placed on Russian Rouble banknotes in this illustration taken, March 23, 2022. REUTERS/Dado Ruvic/Illustration

The requirement raised new hurdles for the mostly European gas purchasers that buy Russian gas. Europe gets about 40% of its gas from Russia, paying largely the 200 million to 800 million euro ($880 million) per day bill in euros and dollars.

Putin gave the Russian central bank and government officials one week to come up with a way to shift payment to the Russian currency. State gas company Gazprom also was ordered to revise its contracts to accommodate the move.

WHAT IS BEHIND THE CHANGE?

The European Union is considering sanctions and the United States, Britain and Canada slapped sanctions on Russia’s central bank and energy imports, dealing a blow to the country’s economy to punish Moscow for its invasion of Ukraine.

If Russia gets paid for gas in roubles, it could avoid some of those financial sanctions. Nearly all Russian gas purchase contracts are denominated in euros or U.S. dollars, according to consultancy Rystad Energy.

Since Russia’s invasion of Ukraine, which the country has called a “special operation”, the rouble has plummeted as much as 85% against the U.S. dollar. It has since rebounded against the dollar and briefly spiked on Wednesday’s announcement.

WHY DOES IT MATTER?

Europe depends heavily on Russian gas for heating and power generation and European Union members are split on whether they can sanction Russia’s energy sector.

Eastbound gas flows via the Yamal-Europe pipeline from Germany to Poland declined sharply, data from the Gascade pipeline operator showed on Wednesday.

HOW POSSIBLE IS THE TRANSITION?

It is unlikely Russia has the power to unilaterally change the terms of contracts already in existence, said legal experts.

“Contracts are made between two parties, and it is usually in U.S. dollars or euros. So if one party unilaterally says ‘no, you’re going to pay in this’ Well, there’s no contract,” said Tim Harcourt, chief economist at the Institute for Public Policy and Governance at the University of Technology Sydney.

“It is not clear how serious a demand this is,” said Susan Sakmar, a visiting law professor at the University Houston and a liquefied natural gas business consultant.

Wednesday’s rise in the rouble-dollar exchange and jump in European wholesale gas prices may be the point, she said. “It would take a long time for something like this to happen. In the meantime, Putin can keep prices elevated. That’s serving his interests well.”

IS THERE A MECHANISM AVAILABLE?

“We’re expecting all kinds of actions on the verge of the unusual but this scenario has been discussed, so there’s no risk for the payments under the existing contract,” he said.

Claudio Galimberti, a senior vice president at Rystad, said it is possible for Russia to devise new contracts that require payment in roubles, but it would require governments to hold roubles in their central banks or buy them on the open market.

WHAT ARE THE LONG-TERM EFFECTS?

Russia, China, Iran and others have hit at the dominance of the U.S. dollar in global trade and the frequency at which Washington applies financial sanctions.

For the United States, a successful switch could contribute to a lessening of the dollar’s role in global trade as the rouble, yuan or other currencies rise in trade. That would have long-term implications for U.S. borrowing and financing costs.

Reporting by Arathy Somasekhar in Houston; Editing by Gary McWilliams and Sam Holmes