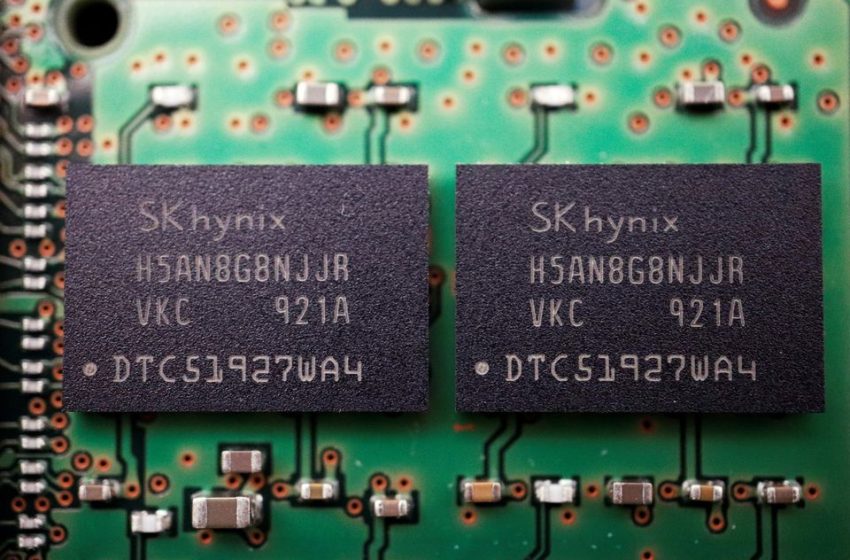 Memory chips by South Korean semiconductor supplier SK Hynix are seen on a circuit board of a computer in this illustration picture taken February 25, 2022. REUTERS/Florence Lo

Exclusive: KLA to stop sales and service to China to comply with U.S. export curbs

SHANGHAI, Oct 11 (Reuters) – U.S. chip toolmaker KLA Corp will cease offering some supplies and services from Wednesday to China-based customers including South Korea’s SK Hynix in compliance with recent U.S. regulations, a source familiar with the situation said on Tuesday.

China is KLA’s largest geographic market, bringing in $2.66 billion in sales, or nearly 30% of its total revenue in the last fiscal year that ended in June, according to the company’s financial filings.

Under new U.S. regulations released on Friday, companies looking to supply Chinese chipmakers with advanced manufacturing equipment must first obtain a license from the U.S. Department of Commerce.

The source, who declined to be identified due to the sensitivity of the matter, said staff in China received an email from KLA’s legal department stating that effective 11:59 p.m. local time (1559 GMT) on Tuesday, the company shall stop sales and service to “advanced fabs” in China for technology of NAND chips with 128 layers or more, and DRAM chips 18nm and below, and advanced logic chips.

“Our top management team has told us to relax for a couple of months,” the source who was briefed on the matter told Reuters.

KLA did not immediately respond to a request for comment outside of working hours.

Reuters previously reported that foreign companies with fabs in China looking to receive advanced chip manufacturing equipment would have their license applications reviewed on a case-by-case basis, while applications to supply Chinese fabs would be reviewed with through a “presumption of denial” standard.

SK Hynix reiterated its stance that it would seek a license under new U.S. export control rules for equipment to keep operating its factories in China. Intel did not immediately respond to a request for comment.

None of the three fabs immediately responded to Reuters’ requests for comment.

Another source at an overseas chip equipment company told Reuters that all of the major suppliers to fabs were working round-the-clock to assess the long-term impact of the regulations.

“We are all overreacting at first, while the legal teams work out the details for every piece of software and equipment that could be affected.”