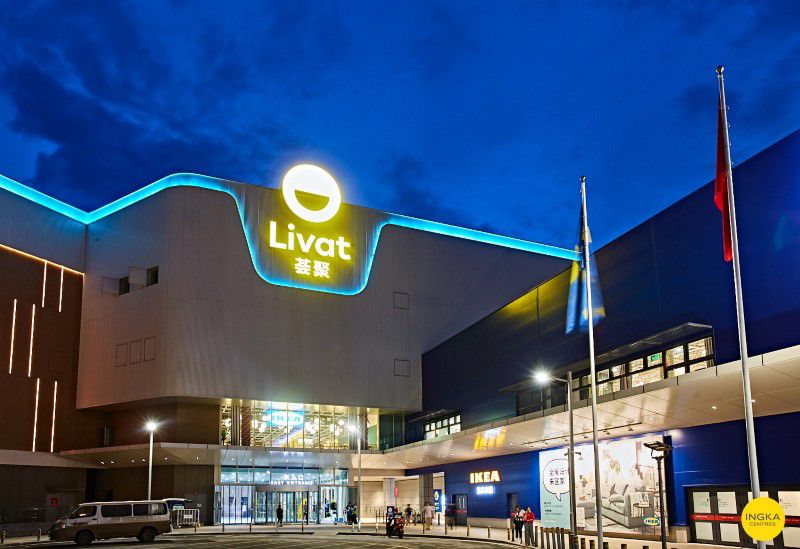 General view of the Livat shopping centre in Changsha, China in this picture obtained by Reuters on August 10, 2021. Ingka Centres/Handout via REUTERS

Exclusive: IKEA’s malls arm branches out into housing with new centre in China

STOCKHOLM, Aug 10 (Reuters) – IKEA’s shopping malls business, one of the world’s biggest, has kicked off the sales process for some 500 flats at its first-ever mixed-use retail and residential development, in Changsha in southern China.

Cindy Andersen, managing director at Ingka Centres since February, said in an interview she expected flat buyers to start moving in in March 2022, after the adjacent mall opened last month following delays due to the pandemic.

Ingka Centres has 45 malls, or “meeting places” as it calls them following a strategy tweak a few years ago, anchored by IKEA furniture stores across Europe, Russia and China – in China under the brand Livat.

The company has shifted towards more entertainment and social spaces in its developments as consumers, in China in particular, increasingly shop online while visiting malls more for food or movies. Andersen told Reuters a third of tenants at the Livat Changsha mall were retailers currently.

With housing, it is testing yet another income leg, banking on the rapid urbanisation in China. Livat Changsha’s residential building, besides the flats, also sport common living and work spaces designed and decorated in co-operation with IKEA that it hopes will appeal to people working from home.

Andersen said the Livat Changsha mall – Ingka Centres’ fifth in China and its first development across markets to also offer housing – had around 95% occupancy in July, with tenants ranging from restaurants and sport and entertainment outlets to around 350 retailers including Decathlon and Uniqlo (9983.T) across 130,000 square metres.

“I think we had a really relevant strategy even before the pandemic, and now the trends we saw already then have accelerated,” she said.

She said that Ingka Centres however, as does parent IKEA, still has great belief in a future for physical shopping, also in China, as long as it’s tailored to consumers expectations for services, omnichannel and convenience.

“There is a need to include retail experiences in the meeting places also going forward. We have a lot of confidence this is a need for the consumer also in China,” she said, adding that Ingka Centres had added 50 international retail brands to its portfolio in China over the past 12 months.

“I think it very much comes down to the fundamental needs of people. We like to be with other people and we like to be in environments where we can experience, where we an touch and feel,” she said.

Across markets, Ingka Centres is trying various omnichannel models and digital services at its malls with tests ranging from local e-commerce platforms to live shopping events.

At Livat Changsha – an over 4 billion yuan ($616.8 million) investment to date – focus initially will be on a loyalty scheme app which is connected to Chinese social media WeChat, sporting services such as virtual reality centre navigation, online restaurant queuing and cinema ticket purchases.

Andersen said the programme currently had around 2.3 million members in China, against 1.5 billion in May 2020.