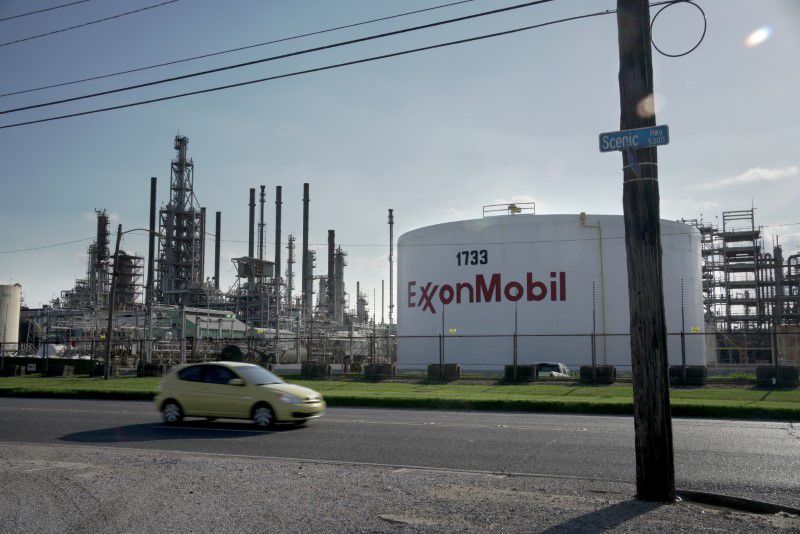 Aug 12 (Reuters) – U.S. oil major Exxon Mobil Corp (XOM.N), along with Chevron Corp (CVX.N), is seeking to bulk up in the burgeoning renewable fuels space by finding ways to make such products at existing facilities, sources familiar with the efforts said.

The two largest U.S. oil companies want to produce sustainable fuels without ponying up billions of dollars that some refineries are spending to reconfigure operations to make such products. Renewable fuels account for 5% of U.S. fuel consumption, but are poised to grow as various sectors adapt to cut overall carbon emissions to combat global climate change.

Both Chevron and Exxon have massive refining divisions that contribute heavily to their overall carbon emissions. The companies have been criticized for a less urgent approach to renewable investments than European rivals Royal Dutch Shell Plc (RDSa.L) and TotalEnergies (TTEF.PA), and have generally spent a lower percentage of their capital than those companies on “green” technologies.

The companies are looking into how to process bio-based feedstocks like vegetable oils and partially processed biofuels with petroleum distillates to make renewable diesel, sustainable aviation fuel (SAF) and renewable gasoline, without meaningfully increasing capital spending.

A task force was created at Exxon’s request within international standards and testing organization ASTM International to determine the capability of refiners to co-process up to 50% of certain types of bio-feedstocks to produce SAF, according to the sources.

Exxon says it will repurpose its existing refinery units among other strategies to produce biofuels. It aims at more than 40,000 barrels per day of low-emission fuels at a competitive cost by 2025.

Chevron is looking into how to run those feedstocks through their fluid catalytic crackers (FCC), gasoline-producing units that are generally the largest component of refining facilities.

“Our goal is to co-process biofeedstocks in the FCC by the end of 2021,” a Chevron spokesperson told Reuters, to supply renewable products to consumers in Southern California.

The company is partnering with the U.S. Environmental Protection Agency (EPA) and California Air Resources Board (CARB) to develop a path to produce fuel that would qualify for emissions credits.

A source familiar with the matter said if approved by the EPA and CARB, Chevron would be able to produce and generate credits for renewable gasoline. That product is not yet commercially available, but can reduce carbon dioxide emissions by 61% to 83%, depending which feedstock is used, according to the California Energy Commission.

Chevron said on its earnings call earlier this month that in the second phase of its process, it would be the first U.S. refiner to use the cat cracker to produce renewable fuels.

“We did it this way, in part, because it’s very capital-efficient … It’s literally just a tank and some pipes,” Chevron Chief Finance Officer Pierre Breber said on the call.

Some refiners, like San Antonio-based Valero Energy Corp (VLO.N) and Finland-based Neste (NESTE.HE), have ramped up production of renewable fuels from waste oils and vegetable oils to cash in on lucrative federal and state financial incentives. Several U.S. refiners are in the midst of partially or totally converting plants to produce certain renewable fuels, particularly diesel.

If approved, new methods of producing renewable fuels at refineries could allow refiners to avoid lengthy environmental permitting processes. Many of these processes are still undergoing further testing to see which can make renewable fuels commercially, but without damaging refining units.Reporting by Laura Sanicola; Editing by Marguerita Choy and Stephen Coates