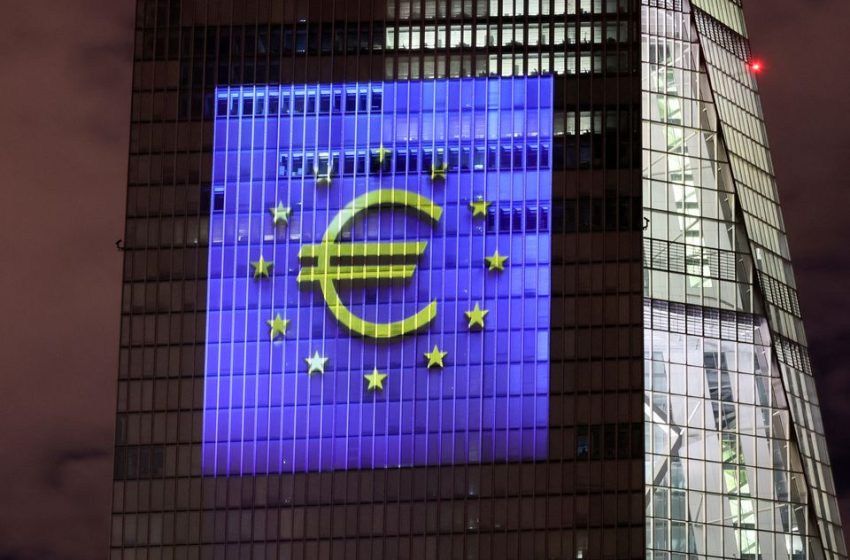 A symphony of light consisting of bars, lines and circles in blue and yellow, the colours of the European Union, illuminates the south facade of the European Central Bank (ECB) headquarters in Frankfurt, Germany, December 30, 2021. REUTERS/Wolfgang Rattay

BRUSSELS, March 29 (Reuters) – The European Central Bank is ready to organise a scheme for millions of Ukrainian refugees to exchange their hryvnia currency into euros if the EU gives the ECB a guarantee that would cover the bank’s risk, an ECB document showed.

Almost 4 million Ukrainians have fled the Russian invasion into the EU but they face problems with exchanging money because few banks want to buy the currency of a country engulfed by war.

Sources told Reuters earlier in the month that the ECB was working on a currency conversion facility, but the document spells out for the first time the options for how that might be achieved. read more

“The preferred option would be that the ECB and Eurosystem National Central Banks act as fiscal agents for the Union,” said the ECB paper, sent to the European Commission last week and seen by Reuters.

Under this option, EU governments would mandate the ECB to carry out the scheme and, to adhere to the prohibition of monetary financing of governments by the bank, they would provide the bank with the money needed to fulfil that mandate.

“The alternative option is based on a mandate given to the ECB by the central bank of Ukraine,” the ECB paper said.

The ECB would sign a deal with the central bank of Ukraine to act as its agent and the EU, through its budget, would extend a guarantee to cover the risk that the Ukrainian central bank might not be able to honour the deal because of the war.

The deal would include the exchange rate for the exchange of hryvnias into euros, the maximum amount and the time during which the scheme would be operational.

While the ECB proposal is for euros, the bank said it could be extended to include EU countries that do not use the euro.

Most of the refugees have headed to Poland, which says it has welcomed 2.3 million people so far. Fellow EU members Romania, Slovakia and Hungary have also seen large numbers of arrivals. Of those, only Slovakia belongs to the single currency. read more

Now they affect mainly the national central banks in countries where the refugees are the most numerous.

The ECB proposal is separate from another plan now under consideration by EU governments under which each Ukrainian refugee could exchange up to 10,000 hryvnias (311 euros) into an EU currency for three months with each EU country handling on its own the financial risk of the exchange. read more