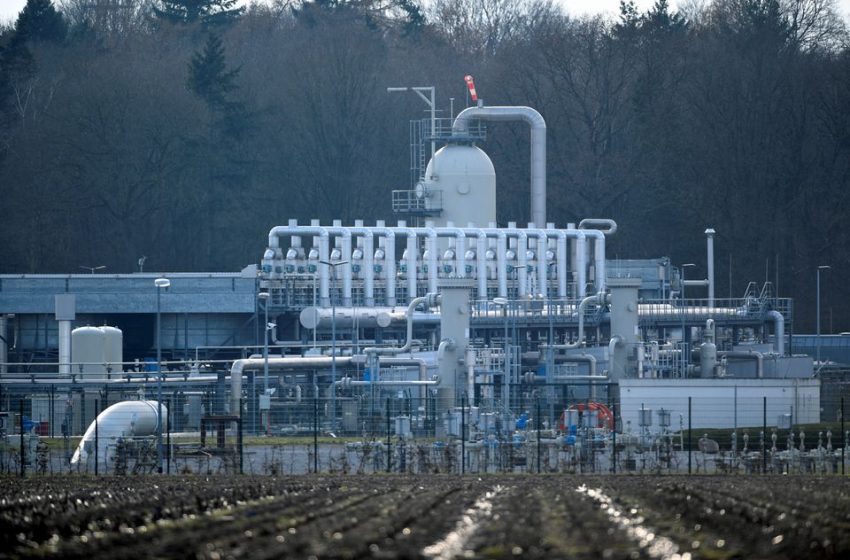 The Astora natural gas depot, which is the largest natural gas storage in Western Europe, is pictured in Rehden, Germany, March 16, 2022. Astora is part of the Gazprom Germania Group. REUTERS/Fabian Bimmer

BRUSSELS, May 2 (Reuters) – Energy ministers from European Union countries hold emergency talks on Monday, as the bloc strives for a united response to Moscow’s demand that European buyers pay for Russian gas in roubles or face their supply being cut off.

Russia halted gas supplies to Bulgaria and Poland last week after they refused to meet its demand to effectively pay in roubles.

Those countries already planned to stop using Russian gas this year and say they can cope with the stoppage, but it has raised fears that other EU countries, including Europe’s gas-reliant economic powerhouse Germany, could be next.

Ukrainian evacuee recounts terror in the bunkers of Azovstal

Jill Biden to meet with Ukrainian refugees in Romania and Slovakia

It has also threatened to crack the EU’s united front against Russia amid disagreement on the right course of action.

With many European companies facing gas payment deadlines later this month, EU states have a pressing need to clarify whether companies can keep buying the fuel without breaching the EU’s sanctions against Russia over its invasion of Ukraine.

Moscow has said foreign gas buyers must deposit euros or dollars into an account at the privately owned Russian bank Gazprombank, which would convert them into roubles.

The European Commission has told countries that complying with Russia’s scheme could breach EU sanctions, while also suggesting countries could make sanctions-compliant payments if they declare the payment complete once it has been made in euros and before its conversion into roubles.

Russia on Friday said it saw no problem with its decree, which considers the buyer’s obligation fulfilled only after the hard currency has been converted to roubles.

While Bulgaria and Poland refused to engage with Moscow’s scheme, Germany has echoed the Commission’s workaround to allow companies to pay, and Hungary has said buyers can engage with Russia’s mechanism. read more

Payments in roubles can help to shelter Russia’s economy from the impact of sanctions, while the fuel revenues can help to finance what it calls a special military operation.

EU countries have paid more than 45 billion euros ($47.43 billion) to Russia for gas and oil since it invaded Ukraine on Feb. 24, research organisation the Centre for Research on Energy and Clean Air found.

Russia supplies 40% of EU gas and 26% of its oil imports, a dependency that means Germany and others have so far resisted calls for an abrupt halt to Russian fuel imports for fear of economic damage.

The EU is edging towards a ban on imports of Russian oil by the end of the year, diplomats said, after talks between the Commission and EU countries at the weekend ahead of meetings this week.

Ambassadors will discuss at a meeting on Wednesday a sixth package of EU sanctions against Moscow being drafted by the Commission.

Ministers on Monday will also discuss the need to urgently secure non-Russian gas supplies and fill storage, as countries brace for supply shocks.

Dependency on Russian gas varies between countries, but analysts have said an immediate total cut-off of Russian gas would plunge countries, including Germany, into recession and require emergency measures such as factory closures to cope.

Austria, Hungary, Italy and Slovakia also had reservations over the weekend about the idea of an oil embargo, diplomats said.

The Commission will later this month unveil plans to end Europe’s dependency on Russian fossil fuels by 2027, including by expanding renewable energy and renovating buildings to consume less.