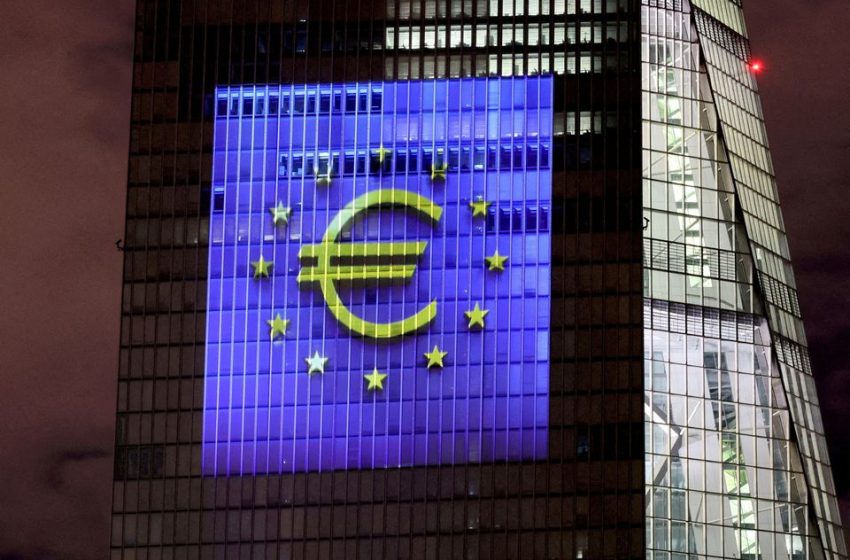 A symphony of light consisting of bars, lines and circles in blue and yellow, the colours of the European Union, illuminates the south facade of the European Central Bank (ECB) headquarters in Frankfurt, Germany, December 30, 2021. REUTERS/Wolfgang Rattay

With inflation already approaching double-digit territory, it is now at risk of getting entrenched above the ECB’s 2% target, requiring rate hikes even if that slows – or crashes – an economy suffering from the impact of Russia’s war in Ukraine.

But policymakers appear far from united on just how fast the ECB should move with some arguing that it is already a long way behind the curve, especially compared to global peers like the U.S. Federal Reserve, while others point to a looming recession that the ECB risks exacerbating.

The bank until recently was signalling a 25 basis point increase to be followed by a bigger move in September, but sources close to the discussion said a 50 basis point increase would also be on the table on Thursday as the inflation outlook is deteriorating quickly. read more

Economists polled by Reuters predicted a 25 basis point increase but most said the bank should actually hike by 50 basis points, lifting its record-low minus 0.5% deposit rate to zero. read more

Complicating the decision, the euro’s recent drop to a two-decade low against the dollar also boosts inflation pressures, adding to the case for a bigger rate hike even if that ultimately hurts growth.

“A 50 basis point ECB hike could push the euro up 2% on the day; more if asset markets were broadly risk-on,” Steven Englander at Standard Chartered said.

A bigger hike would still leave the ECB lagging behind the Fed’s 75 basis point increase last month, especially as a another 75-basis-point rise by the Fed is priced in for this month.

If the ECB decided on an immediate 50-basis-pointrise it would have to shield more indebted nations like Italy or Spain from soaring borrowing costs. So a deal on a new bond purchase scheme, already close to being reached according to sources, would also be needed.

When rates rise, borrowing costs on the bloc’s periphery often increase disproportionately and the ECB has promised to fight this sort of fragmentation with a new instrument.

While not all the details of this tool are expected to be announced, ECB chief Christine Lagarde is likely to make a firm commitment and is under pressure to offer financial markets at least some specifics including on the requirements for triggering ECB aid.

In June, when she made only a vague commitment, investors immediately challenged the ECB, pushing up Italian yields to their highest in a decade, forcing the ECB into a emergency policy meeting and a stronger pledge.

A firm ECB commitment is all the more important as a political crisis in Italy weighs on markets.

The yield spread between Italian and German ten-year bonds widened to 239 basis points on Thursday, not far from the 250 basis point level it was trading at when the ECB went into emergency mode last month.

Under a new schedule, the ECB will announce its policy decision at 1215 GMT, 30 minutes later than previously, while Lagarde’s news conference is due to start 15 minutes later at 1245 GMT.

Along with Thursday’s rate hike, the ECB is also set to signal a string of subsequent increases. It already flagged a 50 basis point hike for September and that is likely to remain on the cards.

It is also expected to pledge further moves, though less likely to make firm commitments.

Markets now see around 92 basis points worth of hikes by September and a combined 170 basis points of moves by the end of the year, or increases at all four remaining policy meetings, with several of 50 basis points along the way.

The dilemma for policymakers will be to balance growth and inflation considerations.

Confidence has already taken a hit from the war in Ukraine, and high raw materials prices are depleting purchasing power, pushing the block towards a possible recession, especially with looming gas shortages over the winter.

Raising rates in a downturn is controversial, however, and could magnify the pain as businesses and households face higher financing costs.

“One problem is that, for example, a gas shutdown would not only hit growth, but would also boost inflation and therefore the ECB may not immediately become more growth-sensitive,” JP Morgan economist Greg Fuzesi said.

The ECB’s ultimate mandate is controlling inflation, however, and rapid price growth for too long could perpetuate the problem as firms automatically adjust prices.

Some central banks, most particularly the Fed, have made clear they are willing to crash growth to control inflation because the risk of a new “inflation regime” setting in is too high.

But if a recession is coming, the ECB needs to front-load rate hikes so it gets done quicker.