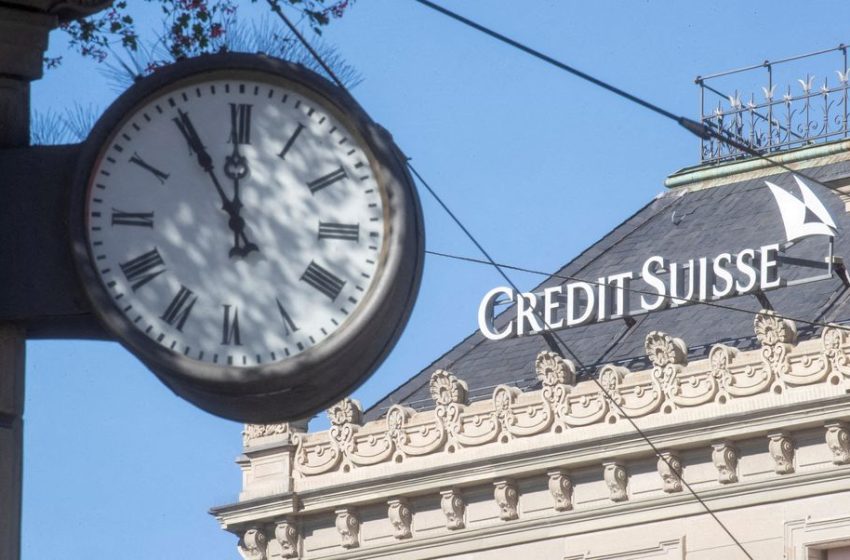 A clock is seen near the logo of Swiss bank Credit Suisse at the Paradeplatz square in Zurich, Switzerland October 5, 2022. REUTERS/Arnd Wiegmann/File Photo/File Photo

ZURICH/FRANKFURT, Oct 20 (Reuters) – Credit Suisse is racing to firm up sales of part of its business that could limit the cash it needs from investors, a person with direct knowledge of the matter said, with just days to go before the bank unveils an overhaul.

The embattled Swiss lender wants to draw a line under a string of scandals and legal actions in a shake-up that would likely see it pare back a volatile investment bank in London and New York to focus on banking for the rich in Switzerland.

The restructuring is being closely watched by Swiss regulator Finma, which is in regular contact with the bank, said a second person familiar with the matter, highlighting the sensitivity of the revamp.

But with just days to go to the Oct. 27 announcement, it remains unclear what businesses can be sold and for what price – critical pieces in a jigsaw that will determine how much the bank may have to ask of shareholders.

Analysts have said the company might need as much as 9 billion Swiss francs ($9 billion) as part of a reorganization, some of which may have to come from investors and some from the sale of assets.

Management intends to sell businesses, such as securitised products, from its investment bank, the first person said, adding, however, that negotiations will likely take until the last minute before the revamp is announced.

The bank recently launched a process that could see its U.S. asset management arm sold, another source recently told Reuters, with initial expressions of interest due at the end of this week. However, there was no guarantee of a sale.

Credit Suisse is also considering spinning off part of its advisory and investment banking business, which could bring in outside investors and be named First Boston, Bloomberg has reported.

If such deals do not materialize or fall short of expectations, Credit Suisse will go for a capital increase, said that person. The bank declined to comment, ahead of its official announcement.

Credit Suisse, one of the largest banks in Europe, is trying to recover from a run of scandals, including losing more than $5 billion from the collapse of investment firm Archegos last year, when it also had to suspend client funds linked to failed financier Greensill.

Earlier this month, in an unusual move, the Swiss National Bank, which oversees the financial stability of systemically important banks in Switzerland, said it was monitoring the situation at Credit Suisse.

That came after unsubstantiated speculation about the bank’s future on social media sent its stock into a tailspin. The bank’s chairman has said its capital is robust. The stock price has roughly halved in value this year.

The bank had earlier approached investors about a capital raise, sources familiar with the matter have said, indicating that selling assets, such as its Savoy Hotel in Zurich, may not be enough.

Credit Suisse has hired Royal Bank of Canada to help organise a capital increase to underpin its finances and secure funds for restructuring, another person familiar with the matter said.

Morgan Stanley is also working on the capital raise, the first source said.

As well as attracting the scrutiny of Swiss regulators, the episode has also caught the attention of the country’s lawmakers.

“I hope they announce the American side of the business will be scaled back – investment banking USA needs to be wound down,” said Thomas Matter, a leading parliamentarian from the Swiss People’s Party, the country’s biggest party in parliament and a member of its governing coalition.

“I am more worried that Credit Suisse will be bought at a bargain price by an American bank,” he said.

“This will dent the value of the company further because it reduces its income,” he said.

Last week, Credit Suisse’s chairman, Axel Lehmann, who took over in January, pledged to reform the bank after a “horrible” 2021 in which it lost billions of dollars, the biggest ever loss in its history. Ian Lapey, a manager at Gabelli Global Financial Services Fund , a shareholder in the bank, said it must outline an ambitious plan to keep investors on side such as by reducing the size of its investment bank.

“If the company roles out a plan that essentially makes a couple of minor changes and looks to raise capital, that will be very difficult.”