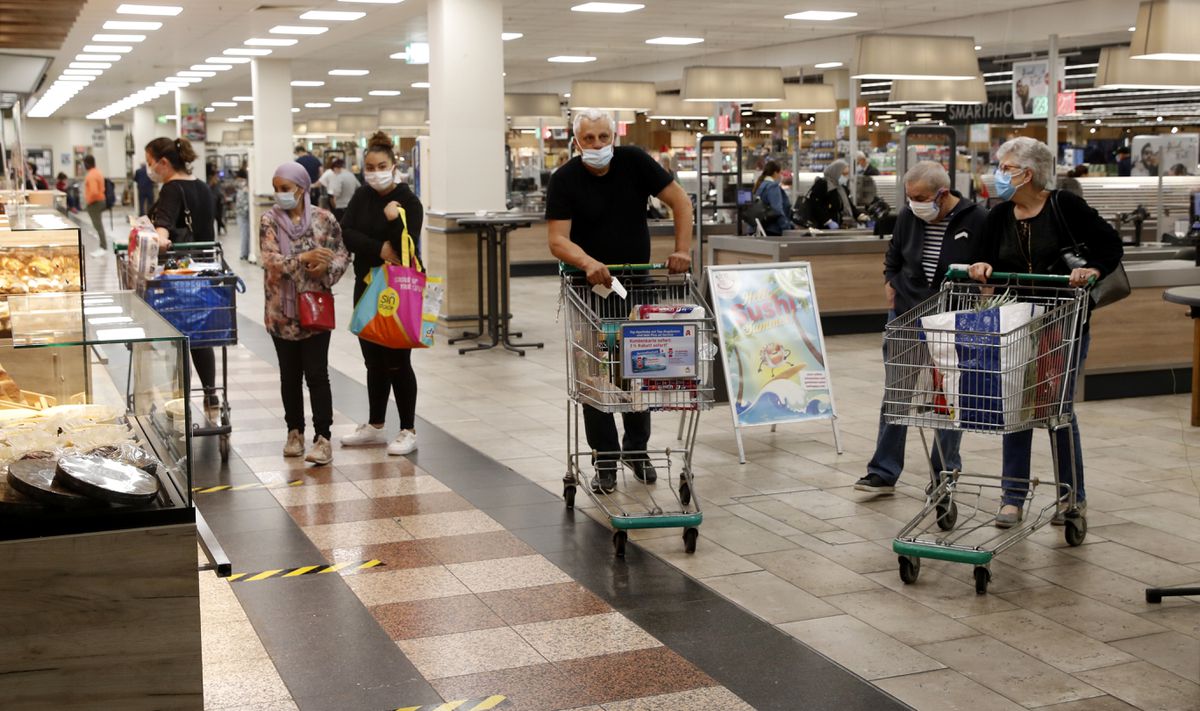 People are seen in a supermarket after the re-opening of the borders, amid the coronavirus disease (COVID-19) outbreak, at the Rhein Center shopping mall in Weil am Rhein, Germany June 15, 2020. REUTERS/Arnd Wiegmann

BERLIN, Nov 25 (Reuters) – A surge in coronavirus infections in Germany is weighing on consumer morale in Europe’s largest economy, dampening business prospects in the Christmas shopping season and threatening to kick away its last remaining pillar of growth.

The GfK institute said on Thursday its consumer sentiment index, based on a survey of around 2,000 Germans, fell to -1.6 points heading into December, from a revised 1.0 points a month earlier.

The December reading was the lowest since June and compared with a Reuters forecast for a smaller drop to -0.5.

The survey was followed by detailed gross domestic product data which showed household spending was the sole driver of a weaker-than-expected economic expansion in the third quarter, more than offsetting a drop in company investments and state consumption over the summer.

Gross domestic product in Europe’s largest economy grew by 1.7% quarter-on-quarter in adjusted terms from July to September, the Federal Statistics Office said. That fell short of a flash estimate of 1.8% published last month.

The data marked a slowdown in German growth from an upwardly revised expansion of 2% from April to June. The economy shrank by 1.9% on the quarter in the first three months of the year.

A 6.2% jump in consumer spending in July-September from the prior three months contributed 3 percentage points to the overall growth rate in the third quarter.

“This is due to catch-up effects in the service sector. Restaurants, bars and the hotel industry in particular benefited,” VP Bank Group analyst Thomas Gitzel said.

But Gitzel added that persistent supply bottlenecks in manufacturing were holding back overall growth, which could be seen in weaker investment activity by companies in machinery and buildings in the third quarter.

A jump in new coronavirus infections over the past weeks is now threatening to kick away Germany’s last remaining pillar of growth in the final quarter.

“The consequences of the pandemic are causing a kind of stop-and-go growth,” Gitzel said.

Inflation rates of more than 4% were also hurting the purchasing power of consumers, he said.

“Together, this is all dampening the business prospects for the upcoming Christmas shopping season,” Buerkl said.

Consumers’ expectations for their personal income and the development of the economy both deteriorated. This pushed down the propensity to buy to a nine-month low.