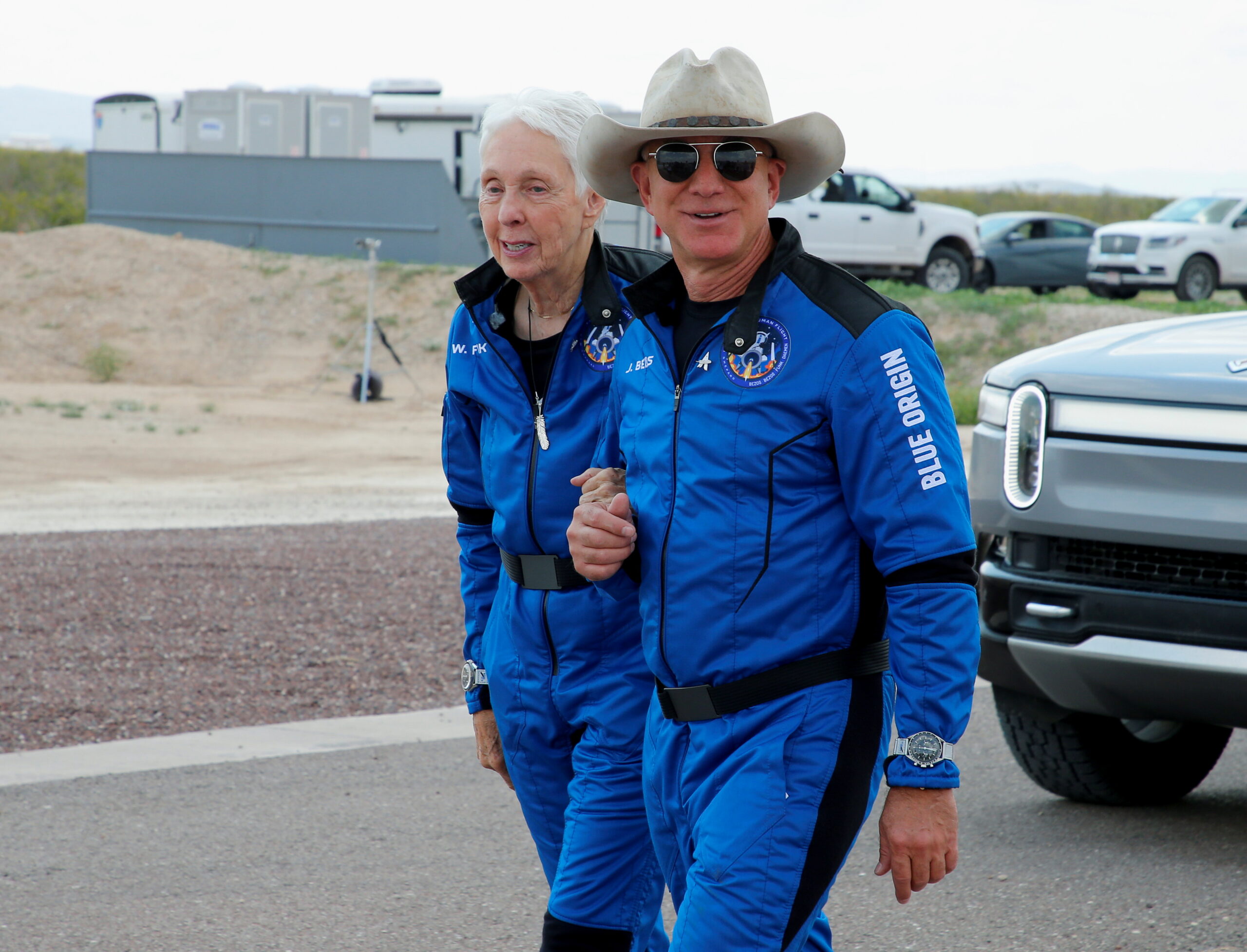 FILE PHOTO: Billionaire American businessman Jeff Bezos walks with crew mate Wally Funk at the landing pad after they flew on Blue Origin's inaugural flight to the edge of space, in the nearby town of Van Horn, Texas, U.S. July 20, 2021. Funk, 82, became the oldest person in space. REUTERS/Joe Skipper/File Photo

SEATTLE, July 26 (Reuters) – Fresh off his trip to space, billionaire businessman Jeff Bezos on Monday offered to cover up to $2 billion in NASA costs if the U.S. space agency awards his company Blue Origin a contract to make a spacecraft designed to land astronauts back on the moon.

The space agency cited its own funding shortfalls, SpaceX’s proven record of orbital missions and other factors in a contract decision that senior NASA official Kathy Lueders called “what’s the best value to the government.”

In a letter to NASA Administrator Bill Nelson, Bezos said Blue Origin would waive payments in the government’s current fiscal year and the next ones after that up to $2 billion, and pay for an orbital mission to vet its technology. In exchange, Blue Origin would accept a firm, fixed-priced contract, and cover any system development cost overruns, Bezos said.

“NASA veered from its original dual-source acquisition strategy due to perceived near-term budgetary issues, and this offer removes that obstacle,” Bezos wrote.

“Without competition, NASA’s short-term and long-term lunar ambitions will be delayed, will ultimately cost more, and won’t serve the national interest,” Bezos added.

A NASA spokesperson said the agency was aware of Bezos’ letter but declined to comment further, citing the protest Blue Origin filed with the U.S. Government Accountability Office accusing the agency of giving SpaceX an unfair advantage by allowing it to revise its pricing.

The GAO’s decision is expected by early August, though industry sources said Blue Origin views the possibility of a reversal as unlikely.

A SpaceX spokesperson did not respond to a request for comment.

Before choosing SpaceX, NASA had asked for proposals for a spacecraft that would carry astronauts to the lunar surface under its Artemis program to return humans to the moon for the first time since 1972. Blue Origin’s lunar lander is called “Blue Moon.” Bezos and Musk are the world’s richest and third-richest people respectively, according to Forbes.

Bezos’ offer came six days after he flew alongside three crewmates to the edge of space aboard Blue Origin’s rocket-and-capsule New Shepard, a milestone for the company’s bid to become a major player in an emerging space tourism market.Reporting by Eric M. Johnson in Seattle; Editing by Will Dunham and Matthew Lewis