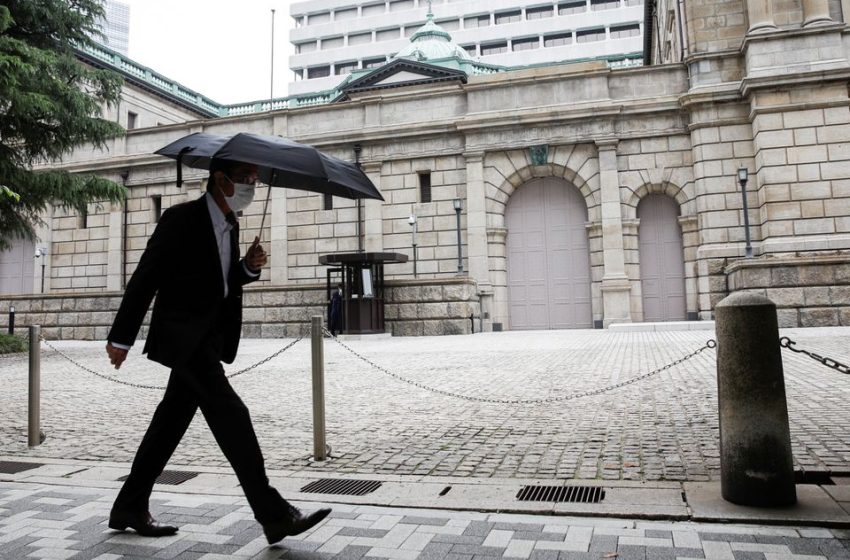 A man wearing a protective mask walks past the headquarters of Bank of Japan amid the coronavirus disease (COVID-19) outbreak in Tokyo, Japan, May 22, 2020.REUTERS/Kim Kyung-Hoon

TOKYO, March 29 (Reuters) – The Bank of Japan kept up its relentless quest to defend a key yield cap by offering to buy unlimited amounts of 10-year government bonds on Tuesday, underscoring its resolve to keep policy ultra-loose and putting downward pressure on the yen.

The BOJ’s intervention raised the stakes for policymakers in the world’s third-largest economy as Japan tries to navigate the rising cost of imports from a weakening currency and global fallout of the Ukraine war.

The bond market intervention is in line with an announcement the BOJ made on Monday to offer unlimited bond buying from Tuesday to Thursday to keep the 10-year Japanese government bond (JGB) yield from rising above an implicit 0.25% cap it sets around its 0% target.

The BOJ made two offers on Tuesday, after the first in the morning failed to push down yields much. Combined, the offers drew bids worth 528.6 billion yen ($4.28 billion).

The 10-year JGB yield stood at 0.245% on Tuesday, hovering near the BOJ’s implicit 0.25% cap despite the central bank’s intervention.

Some analysts doubted if the central bank can sustain its bond-buying action for a prolonged period.

“Theoretically the BOJ can protect 25 basis-point upper bound through unlimited fixed-rate operations. But at the same time, I think this situation is not sustainable,” said Kentaro Koyama, chief economist at Deutsche Bank in Tokyo.

“In the short term, the BOJ can continue unlimited purchasing operations. But if the BOJ continues to be challenged by the market, I think it may be the trigger to adjust their yield curve control.”

Struggling to swim against the tide of rising interest rates globally, the BOJ staunchly defended its 0.25% yield cap on Monday with a rare step of offering to buy unlimited sum of 10-year JGBs at 0.25% twice in a single day. read more

The central bank then announced its plan for consecutive interventions that will last until Thursday.

Aside from the offer to buy unlimited amount of 10-year JGBs at 0.25%, the BOJ may also conduct unscheduled buying operation for super-long bonds if yields for the maturity spike, analysts say.

“With regard to the outright purchases of JGBs…the BOJ may change the schedule and amounts of the purchases as needed, taking account of market conditions,” the BOJ said in Monday’s statement announcing its plan for fixed-rate operations.

Underlining the selling pressure JGBs faced, the yield curve steepened at the longer end. The yields for 20-, 30- and 40-year notes , , all rose to their highest levels since 2016.

Under yield curve control, the BOJ guides short-term rates at -0.1% and the 10-year JGB yield around 0%.

The BOJ’s aggressive efforts to cap yields pushed the yen to six-year lows against the dollar, which could add to the strains facing households and retailers by inflating already soaring raw material import costs.

In a sign of the government’s growing alarm over the yen’s fall, Japan’s top currency diplomat said Tokyo has discussed dollar-yen moves with Washington, and the two sides agreed to communicate closely on currencies. read more

“The BOJ’s message to prevent interest rate rises is a very strong one with no consideration to the weak-yen effect its action could cause,” said Suehiro.

Deputy Chief Cabinet Secretary Seiji Kihara, among the closest aides to Prime Minister Fumio Kishida, said on Sunday the BOJ must maintain its massive stimulus as dealing with cost-push inflation with policy tightening is difficult.

In a sign fiscal policy will play a bigger role in cushioning the blow from rising raw material costs, Kishida ordered his cabinet on Tuesday to compile a fresh relief package. read more