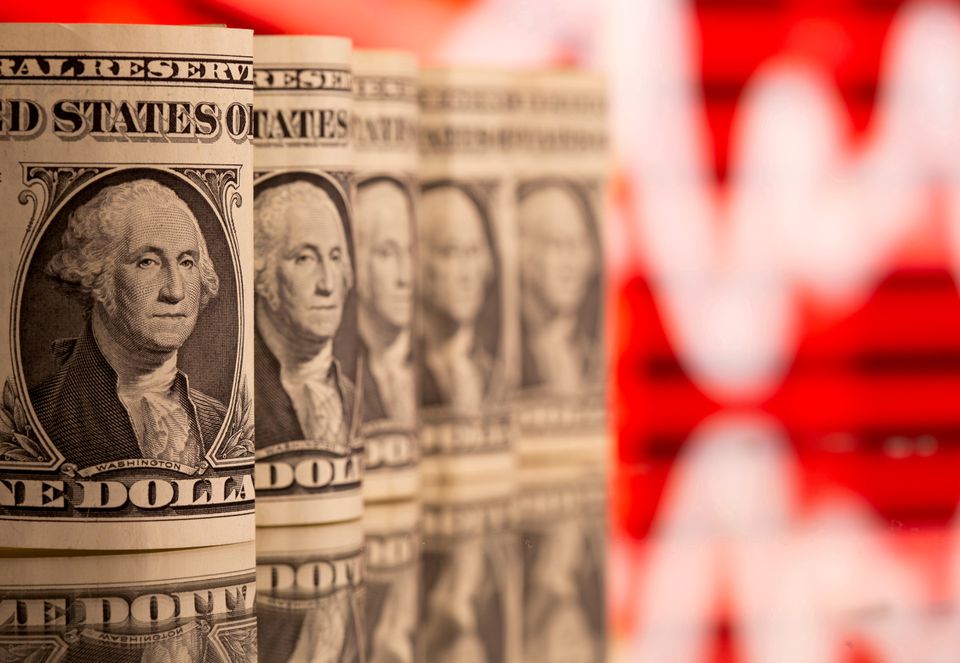 U.S. One dollar banknotes are seen in front of displayed stock graph in this illustration taken, February 8, 2021. REUTERS/Dado Ruvic/Illustration/File Photo

Traders are also looking to policy announcements this week from the European and Canadian central banks for clues on the outlook for rates amid the backdrop of supply-side driven global inflation pressures.https://80fd037c3e92afcf5d4f76c703603cd9.safeframe.googlesyndication.com/safeframe/1-0-38/html/container.html

The Australian dollar was last up 0.35% at $0.7525 heading back towards a four-month top of $0.7546 hit last week, after data showed Australian core inflation rose at its fastest annual pace since 2015 in the September quarter, and quicker than the Reserve Bank of Australia’s projections.

The data backed markets’ view that the RBA is behind the curve on inflation and may have to tighten monetary policy earlier than it has been publicly planning for.

“The stronger trimmed mean print will put some pressure on the RBA to rethink its forward guidance for the cash rate,” wrote ANZ analysts in a note.

Towards the other end of the spectrum, analysts expect the Bank of Japan (BOJ) will signal a strong commitment to maintaining its easy monetary settings at Thursday’s meeting.

The BOJ is widely expected to downgrade its economic assessment, with markets betting on no rate hike in the foreseeable future. read more

The European Central Bank, which holds its own policy meeting on Thursday, is also expected to be slow in tightening its policy, keeping the euro in check.

Not all central banks are as far off from tightening policy however. Significantly, the U.S. Federal Reserve looms large for markets as they prepare for policymakers to announce next month it will start tapering its massive asset purchase programme.

The Fed speculation pushed the dollar index , which measures the greenback against a basket of its peers, to a 12-month high 94.563 earlier this month, but it has since pared some of those gains. The index was last at 93.911.

“We think the dollar is going to turn lower from here especially when the Fed does start tapering as people start to ‘sell the fact'” said Daniel Lam senior cross-asset strategist, at Standard Chartered Wealth Management.

“That’s already happening as people kind of front run it,” he said.

The Bank of Canada also has a policy announcement due later on Wednesday, with investors expecting it will raise its inflation forecast and largely end stimulus from its pandemic-era bond buying program, making it the first central bank from a G7 country to do so.

The Canadian dollar was steady, having eased a little in recent days as traders worry the BoC will temper investor expectations.

Markets are expecting a C$1 billion reduction in its bond purchase, while fully pricing in a rate hike by April next year. read more

“While the market is likely correct in expecting another C$1bn cut in the pace of asset purchases, the more sensitive question is on the policy rate, and here we think it might be next to impossible for the Bank of Canada to validate market pricing on lift-off timing,” Michael Hsueh, research analyst at Deutsche Bank in New York, said in report.