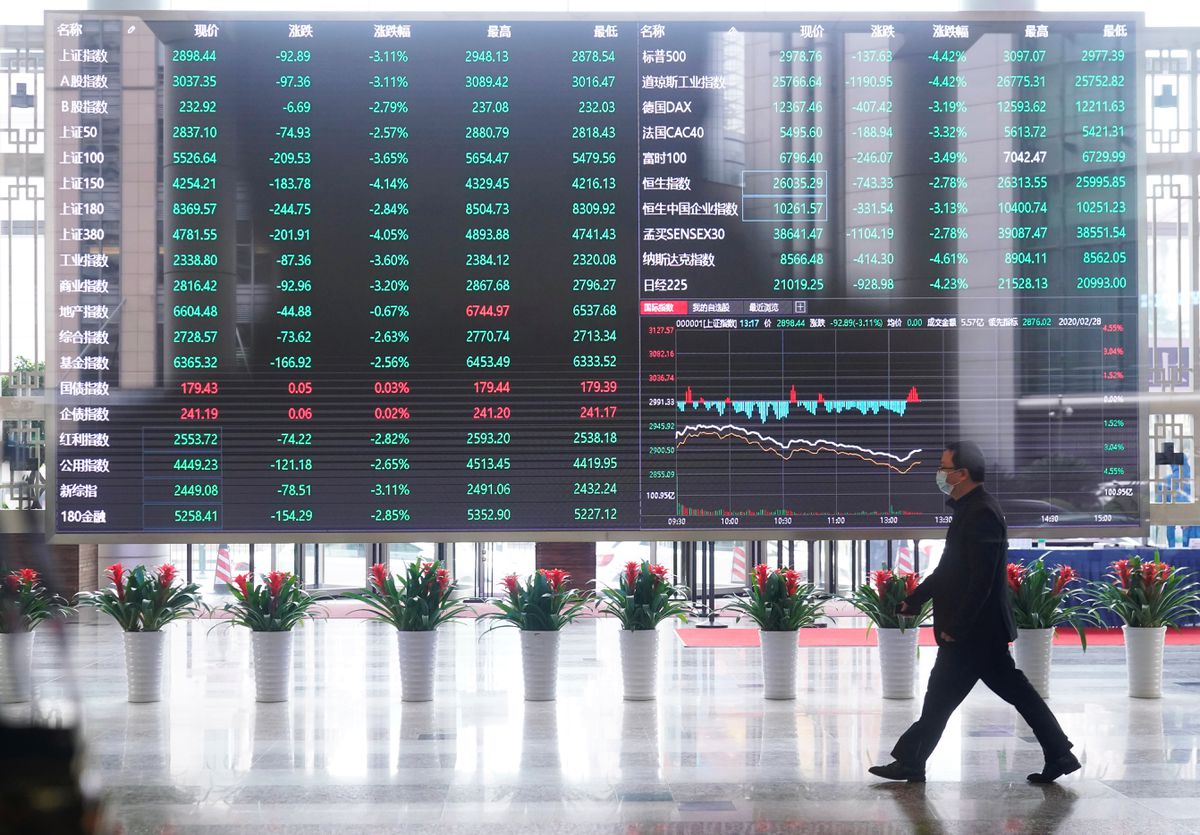 A man wearing a face mask is seen inside the Shanghai Stock Exchange building, as the country is hit by a novel coronavirus outbreak, at the Pudong financial district in Shanghai, China February 28, 2020. REUTERS/Aly Song

SYDNEY, Sept 2 (Reuters) – Asian share markets were in a cautious mood on Thursday as concerns grew over the Chinese economy after a run of soft data, while the risk of a sub par U.S. payrolls report kept the dollar on the defensive.

“The spread of the Delta variant amid still-low vaccination rates in many ASEAN economies and China’s zero-tolerance Covid strategy has prompted governments to impose restrictions and order factory/port closures,” warned analysts at Nomura.

“Input shortages and low inventories will likely lead to production cuts and delayed shipments in Q3.”

Wall Street has been preoccupied with second guessing U.S. August payrolls, due out on Friday, with the task made all the more uncertain by a disappointing reading on ADP private payrolls but a solid ISM survey of manufacturing. [nN9N2NL019[ read more

Median forecasts are for a strong rise of 750,000 jobs, but they range from 375,000 to 1.02 million with the ADP report prompting speculation the risks are to the downside.

Yet a soft number could be positive for risk assets since it would lessen pressure for an early tapering from the Federal Reserve.

“A print closer to 400k rather than 800k effectively means that the Fed’s condition of “further substantial progress” in the labour market will take longer to materialise, thus delaying the tapering decision from September to November,” said Rodrigo Catril, a senior FX strategist at NAB.

“Bad news in the labour market are good news for risk assets given the punchbowl will remain well liquefied for a bit longer.”

Amid the jobs chatter, 10-year Treasury yields eased back to 1.30% and away from the recent top of 1.375%, while the U.S. dollar index touched a one-month low.

The single currency was aided by hawkish comments from Bundesbank President Jens Weidmann who cautioned against inflation risks and called for a slowdown in bond buying by the European Central Bank. read more

In contrast, the Bank of Japan shows no sign of tapering its massive purchases as the country remains mired in a decades-long battle with deflation.

Commodities would likely benefit from any delay in Fed tapering, helping underpin gold at $1,813 an ounce but short of resistance around $1,823.

Oil prices eased after OPEC+ agreed to stick to a policy of adding 400,000 barrels per day a month to the market, though it also defied pressure for an even larger increase. read more

“Ignoring calls from the White House for further barrel increases, we think that OPEC+ will stay on this current course unless there is a clear deterioration in the demand outlook,” said analysts at RBC Capital Markets in a note.

“Moreover, we reiterate that if there is a price bias for the majority of the OPEC+ membership, it is to the upside given the high fiscal breakevens of member states.”