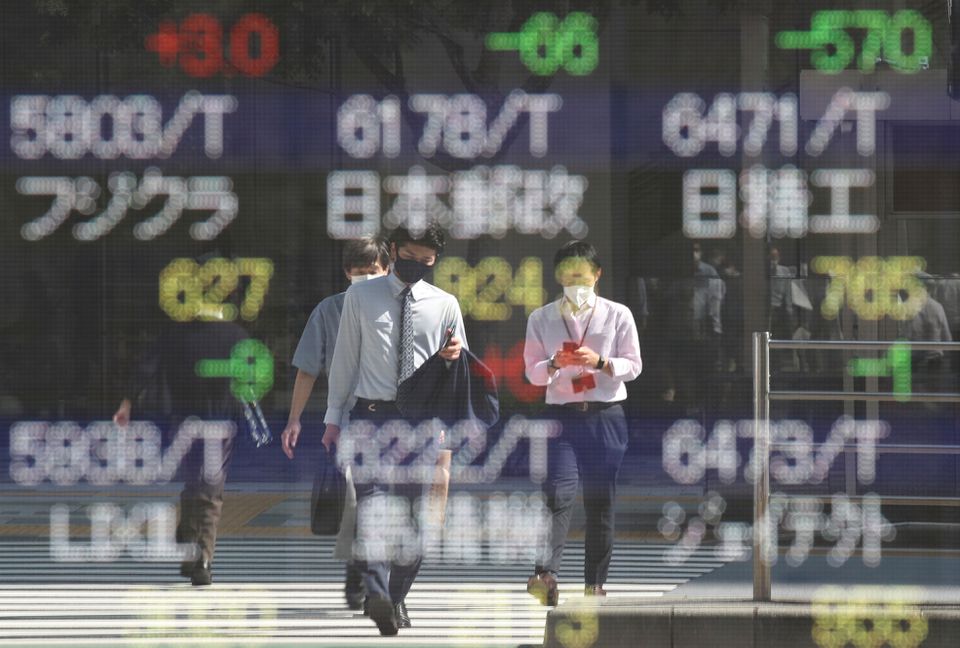 People wearing protective masks, amid the coronavirus disease (COVID-19) outbreak, are reflected on an electronic board displaying Japan's stock prices outside a brokerage in Tokyo, Japan, October 5, 2021. REUTERS/Kim Kyung-Hoon

SINGAPORE, Dec 7 (Reuters) – Asian shares staged a recovery on Tuesday on receding worries about the impact of the Omicron variant while Chinese markets were supported by the central bank easing monetary policy.

MSCI’s broadest index of Asia-Pacific shares outside Japan (.MIAPJ0000PUS) advanced 1.3% and was on course for its biggest jump in two months, after declining on Monday to the lowest level in one year.

The People’s Bank of China said on Monday it would cut the amount of cash that banks must hold in reserve, its second such move this year, releasing the funds in long-term liquidity to bolster slowing economic growth.

China is in a mid-cycle slowdown and the RRR cut is exactly what the economy needs to get back on track, said Chao. “It’s feasible that more RRR cuts are in store over the next year in order to stabilize growth,” he added.

MSCI’s main Asia ex-Japan benchmark has lost about 5% so far this year, with Hong Kong markets figuring among the big losers, while Indian (.BSESN) and Taiwanese stocks (.TWII) outperformed.

Shares in embattled developer Evergrande (3333.HK) edged up 1.7% after hitting a record low on Monday as markets awaited to see if the real estate giant has paid $82.5 million with a 30-day grace period coming to an end.

“While epidemiologists have rightly warned against premature conclusions on Omicron, markets arguably surmised that last week’s brutal sell-off ought to have been milder,” Vishnu Varathan, head of economics and strategy at Mizuho Bank , said in a note.

“After all, early assessments of Omicron cases have been declared mild, spurring half-full relief.”

Omicron has spread to about a third of U.S. states, but the Delta version accounts for the majority of COVID-19 infections in the United States, health officials said on Sunday. read more

Dr. Anthony Fauci, the top U.S. infectious disease official, told CNN it does not look like Omicron has a “great degree of severity.”

The risk-on mood also helped the dollar climb against safe haven currencies such as the Japanese yen, , which lost 0.6% overnight, while the risk-friendly Australian dollar also found buyers.

Also supporting the dollar was the expectation the Federal Reserve will accelerate the tapering of its bond-buying program when it meets next week in response to a tightening labour market.

Oil prices ticked higher, consolidating a nearly 5% rebound the day before as concerns about the impact of the Omicron variant on global fuel demand eased.

Gold prices were steady at $1,778.5 per ounce on expectations U.S. consumer price data due later this week will show inflation quickening.