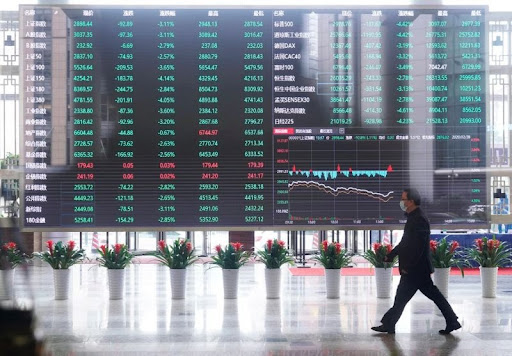 Elsewhere, Turkey’s lira could not break far from Thursday’s record low when it weakened about 6% after the central bank, under pressure from President Tayyip Erdogan, cut rates again even as inflationary risks broadened. read more

MSCI’s broadest index of Asia-Pacific shares outside Japan (.MIAPJ0000PUS) fell 0.44% and was set for a weekly decline of 1%, even after a solid performance overnight on Wall Street boosted by upbeat corporate earnings.

The tone was more subdued in Asia, with the Hong Kong benchmark (.HSI) down sharply 1.5%, dragged down by index heavyweight Alibaba (9988.HK).

The Chinese e-commerce firm’s shares tumbled more than 10% after its second-quarter results missed expectations due to slowing consumption, increasing competition and a regulatory crackdown. read more

Kenny Ng, a strategist at brokerage Everbright Sun Hung Kai Securities, said as well as Alibaba, recent poor results at Baidu (9888.HK), which was off 3%, and Bilibili (9626.HK), whose shares are suspended, had reinforced the downward trend.

Given the sharp slowdown in recent Chinese retail data more broadly, analysts at Citi said in a note Alibaba’s results were not surprising.

Chinese economic data over recent months has also underlined a loss of growth momentum, dragging down stocks across the region.

MSCI’s Asian regional benchmark is down 13% from its February high, while MSCI’s gauge of stocks across the globe (.MIWD00000PUS) sits at a record high.

Analysts at ANZ expect Asian stocks to continue to struggle.

“A confluence of powerful headwinds is building – a slowing China, higher commodity prices at the wrong time of the business cycle, and a mild rebound in household demand,” they said.

“Each of these developments, combined with monetary policy normalisation, can weigh on stock market earnings and valuations.”

The yen hardly reacted to the news, and was headed for a small weekly loss, trading at 114.33 per dollar in sight of its almost five-year low of 114.97 a few days ago.

Other major currencies were also largely quiet with the dollar sitting just below a 16-month high hit against a basket of its peers earlier in the week. FRX

“There is a lot already in the price and as a result, progress toward higher yields is likely to be slow and defined by momentum shifts and sentiment swings,” said analysts at Westpac in a note.

On Thursday, oil fell to six-week lows after Reuters reported, citing sources, that the Biden administration asked some of the world’s largest oil consuming nations – including China, India and Japan – to consider releasing crude stockpiles in a coordinated effort to lower global energy prices. read more