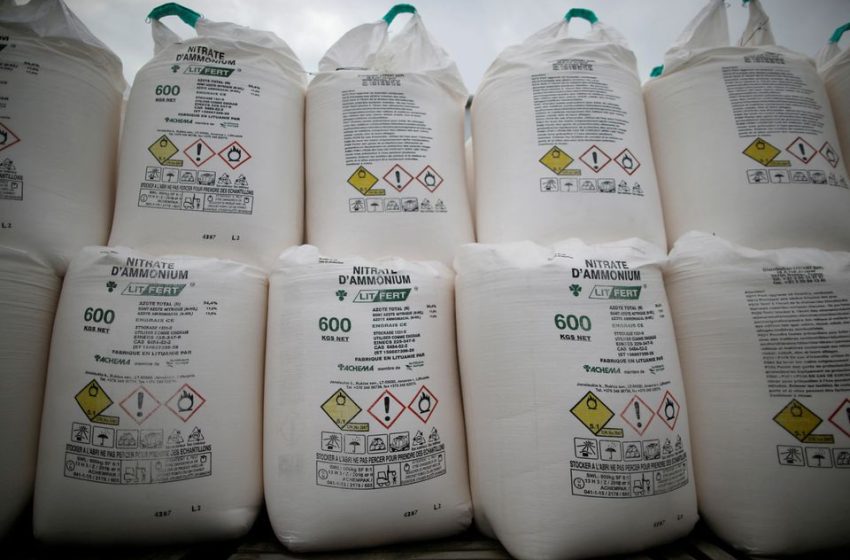 CHICAGO, March 23(Reuters) – Sky-high fertilizer prices have farmers worldwide scaling back its use and reducing the amount of land they’re planting, fallout from the Ukraine-Russia conflict that has some agricultural industry veterans warning of food shortages.

Western sanctions on Russia, a major exporter of potash, ammonia, urea and other soil nutrients, have disrupted shipments of those key inputs around the globe. Fertilizer is key to keeping corn, soy, rice and wheat yields high. Growers are scrambling to adjust.

The pivot can be seen in agricultural powerhouse Brazil, where some farmers are applying less fertilizer to their corn, and some federal legislators are pushing to open protected indigenous lands for the mining of potash. In Zimbabwe and Kenya, small farmers are reverting to using manure to nourish their crops. In Canada, one canola farmer has already stockpiled fertilizer for the 2023 season in anticipation of even higher prices ahead.

Farmers elsewhere are making similar moves. Reuters spoke with 34 people on six continents, including grain producers, agriculture analysts, traders and farm groups. All expressed concern about the cost and availability of fertilizer.

In the United States alone, fertilizer bills are expected to jump 12% this year, after rising 17% in 2021, according to American Farm Bureau Federation and U.S. Department of Agriculture (USDA) data.

Some growers are contemplating switching to crops that require fewer nutrients. Others plan to cultivate less acreage. Others say they’ll simply use less fertilizer, a strategy crop experts predict will hurt yields. Production is most at risk in developing nations, whose farmers have fewer financial resources to weather the storm, said Tony Will, chief executive of Illinois-based CF Industries Holdings (CF.N), a leading producer of nitrogen fertilizer.

“My concern at the moment is actually one of a food crisis on a global basis,” Will told Reuters.

On Saturday, Peru declared a state of emergency in its agriculture sector over fears of food insecurity.

The decree said the nation’s planted areas have fallen 0.2% since August due to rising fertilizer prices, and that the volume of grain Peru imports for animal feed has likewise declined over cost concerns. The government is now drafting a plan to increase the country’s food supply.

Global fertilizer prices were already high prior to Russia’s Feb. 24 invasion of its neighbor, as record natural gas and coal prices forced some fertilizer makers to cut output in that energy-hungry sector. Ukraine’s cities have been besieged by missiles, tanks and troops in what Moscow has dubbed a “special operation” to demilitarize the country. Russia denies targeting civilians in the conflict.

Western nations responded with tough economic sanctions on Russia, while the United States and the European Union imposed new sanctions on Belarusian President Alexander Lukashenko, who has provided support for Russia’s offensive.

Combined, Russia and Belarus accounted for more than 40% of global exports of potash last year, one of three critical nutrients used to boost crop yields, Dutch lender Rabobank said this month. Additionally, Russia accounted for about 22% of global exports of ammonia, 14% of the world’s urea exports and about 14% of monoammonium phosphate (MAP) – all key kinds of fertilizers.

Sanctions have disrupted sales of fertilizer and crops from Russia. Many Western banks and traders are steering clear of Russian supplies for fear of running afoul of the rapidly changing rules, while shipping firms are avoiding the Black Sea region due to safety concerns.

It all amounts to a double whammy for the global food supply.

Russia and Ukraine are major grain producers. Together they account for about 30% of global wheat exports and 20% of corn exports. Grain shipments through the Black Sea have already been disrupted. Stalled deliveries from those two countries have helped spur galloping global food inflation. The World Bank said last week that a number of developing countries face near-term wheat supply shortages due to their high dependence on Ukrainian exports. read more

But the fertilizer crisis is in some respects more worrying because it could inhibit food production in the rest of the world that could help take up the slack, said Maximo Torero, chief economist for the U.N. Food and Agriculture Organization.

“If we don’t resolve the problem of fertilizer, and trade of fertilizers doesn’t continue, then we’ll have a very serious problem of [food] supply next year,” Torero told Reuters.

Brazil, the world’s biggest soybean exporter, relies heavily on imported fertilizers such as potash, which accounted for 38% of the crop nutrients it used last year. Russia and Belarus were the source of half of those shipments.

Prior to the Ukraine-Russia conflict, Brazilian farmers were already reducing corn plantings due to rising fertilizer prices. Soybean cultivation will likely be impacted as well, with growers expanding more slowly than in previous years, according to Agroconsult, a Brazilian agriculture consulting firm.

In the west-central state of Mato Grosso, farmer Cayron Giacomelli told Reuters he has already reduced fertilizer use on his current corn crop. He said he’ll do the same when he plants soybeans later this year, a move he reckons might shrink his harvest by at least 8%.

Giacomelli said fertilizer is hard to get and that some dealers won’t finalize sales until cargo ships dock in Brazil. He’s still kicking himself for not closing a purchase he was negotiating just before Russia invaded Ukraine. “I got distracted and now am paying more,” Giacomelli said.

Lawmakers from Brazilian farm states, meanwhile, are pushing for legislation that would open indigenous lands in the Amazon to potash mining. That measure is opposed by members of the local Mura tribe, who say mining would despoil the natural habitat upon which they depend. The bill is still making its way through the nation’s congress. read more

In Zimbabwe, scarce and pricy imports have forced corn growers such as Boniface Mutize to make their own fertilizer. “We mix cow dung or chicken waste with zinc,” he said.

It’s the same in rural Kenya. Farmer Mary Kamau said she, too, has slashed purchases of commercial fertilizer and is using manure to nourish the coffee and avocados she grows on 12 acres in Murang’a County. She worries about the consequences for her family.

“If I don’t get a good harvest, I don’t get good prices. And that will affect me for the next two years – it’s not just this season,” Kamau said.

In the United States, fifth-generation New Mexico farmer Mike Berry has similar worries. He recently paid $680 a ton for liquid nitrogen to fertilize his corn crop, an “exorbitant” price he said was 232% above last year’s price.

Berry said he plans to cut his spring plantings of corn for livestock feed to about 300 acres from his usual 400 to 600 acres. Berry said he will also reduce applications of liquid nitrogen by about 30%, which could drop his yields by 25%.

That might seem short-sighted considering commodity prices have jumped sharply in recent weeks. But the cost of growing crops is outpacing potential revenue for many farmers.

“Planting decisions are increasingly being made not on market fundamentals but rather on the cost of production driven by the price and supply of fertilizer,” dozens of U.S. lawmakers wrote in a March 17 letter to the U.S. International Trade Commission. They were seeking relief from duties on fertilizer imports from Morocco and Trinidad and Tobago.

“It’s nuts,” said Batie, who grows corn and soybeans on 1,500 acres in Lexington, Nebraska. “By the time they get a price and they quote it to you, the price changes.”

Asia is struggling, too.

India, which imports fertilizer for its sprawling agriculture sector, is increasingly turning to Canada and Israel to replace its Russian supplies. read more

Thailand, meanwhile, is facing pressure on its signature rice crop. Russia and Belarus accounted for about 12% of its fertilizer imports last year, Thai government data show. But buying from elsewhere could prove tricky, in part because domestic price controls on fertilizer are squeezing Thai importers as global market prices explode, according to Plengsakdi Prakaspesat, president of the Thai Fertilizer and Agricultural Supplies Association.

“If you’re a merchant, and you’re absolutely going to lose money, will you still import more stuff?” Plengsakdi said.

Concerns over rising inflation and a protracted Ukraine war have some farmers planning well ahead.

In Manitoba, Canada, corn and canola farmer Bert Peeter recently agreed to spend more than $500,000 Canadian dollars buying 80% of the fertilizer he’ll need – for 2023. Although prices are soaring, he figured things could still get worse.

This “might not be over after one year,” Peeter said.