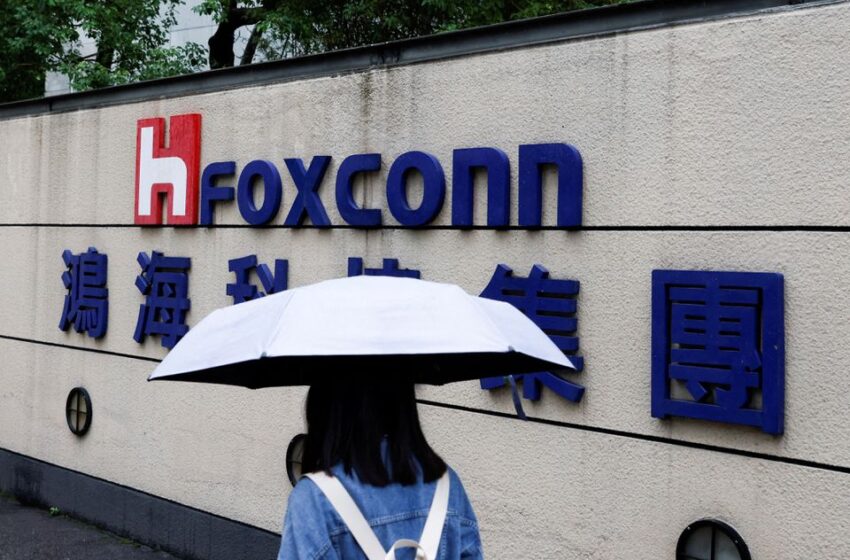 A woman carrying an umbrella walks past the logo of Foxconn outside a company's building in Taipei, Taiwan October 31, 2022. REUTERS/Carlos Garcia Rawlins

Foxconn has grabbed headlines in recent weeks, with tight virus restrictions at its Zhengzhou plant, the world’s largest iPhone factory, disrupting production and fuelling concerns over the impact of China’s virus policy on global supply chains. The plant in China’s industrial hub employs about 200,000 people.

“We will definitely work all out to adjust our production capacity and output, so there is no impact on demand for these two holidays,” Liu said. He did not give details.

The cost impact of the COVID controls, including offering bonuses to retain workers, will be short term and Foxconn has been working with the government to resume normal production as soon as possible, he added.

On Wednesday, Foxconn said it would continue production in Zhengzhou under a “closed loop” system, where staff live and work on-site in a bubble isolated from the wider world. read more .

Many employees have fled the factory over the rigid controls which have limited people’s movement and seen enforced quarantine, with stories of food and medical shortages circulating on social media.

If disruptions persist, it could hamper Foxconn’s ability to ship iPhones in what is traditionally the peak season for Taiwan tech firms as they race to supply cellphones and other electronics for the year-end holiday period in Western markets followed by the Lunar New Year in East Asia.

When asked if customers are pushing for production to be distributed to other Chinese cities or outside of China, Liu said that geopolitics is more likely to play a role in restructuring Foxconn’s production footprint than the pandemic.

“Of course there may be other factors that require the reconfiguration of production capacity, such as geopolitics,” Liu said.

Eleven analysts were expecting on average profit of T$41.3 billion, according to Refinitiv.

Having said on Monday it would “revise down” its fourth quarter outlook given the situation in Zhengzhou, Foxconn said revenue in the final three months of this year would be flattish. It had a relatively conservative outlook for 2023.

Foxconn said it expects a slight decline in fourth-quarter revenues year-on-year for its smart consumer electronics business, which includes smartphones, and significant growth for cloud and network products.

Shares of Foxconn, which has a market value of $43.6 billion, closed down 2% ahead of the earnings release, lagging a 1% drop in the broader market.

Foxconn’s disappointing earnings come at a time when investors are concerned about slowing tech demand due to high inflation and escalating global supply chain issues due in part to China’s COVID policy, with no clear exit strategy in sight.

Apple Inc. has also fallen victim to China’s strict COVID policy as Foxconn accounts for 70% of iPhone shipments globally, with the California-based vendor this week lowering its forecast for shipments of the premium iPhone 14 models. read more

In some cases, just a handful of cases has triggered city-wide lockdowns, which have taken a heavy toll on business activity and consumer confidence. read more

Reuters last month reported that Foxconn’s production of Apple’s iPhones at the Zhengzhou factory could slump by as much as 30% in November due to tight COVID-19 restrictions. read more