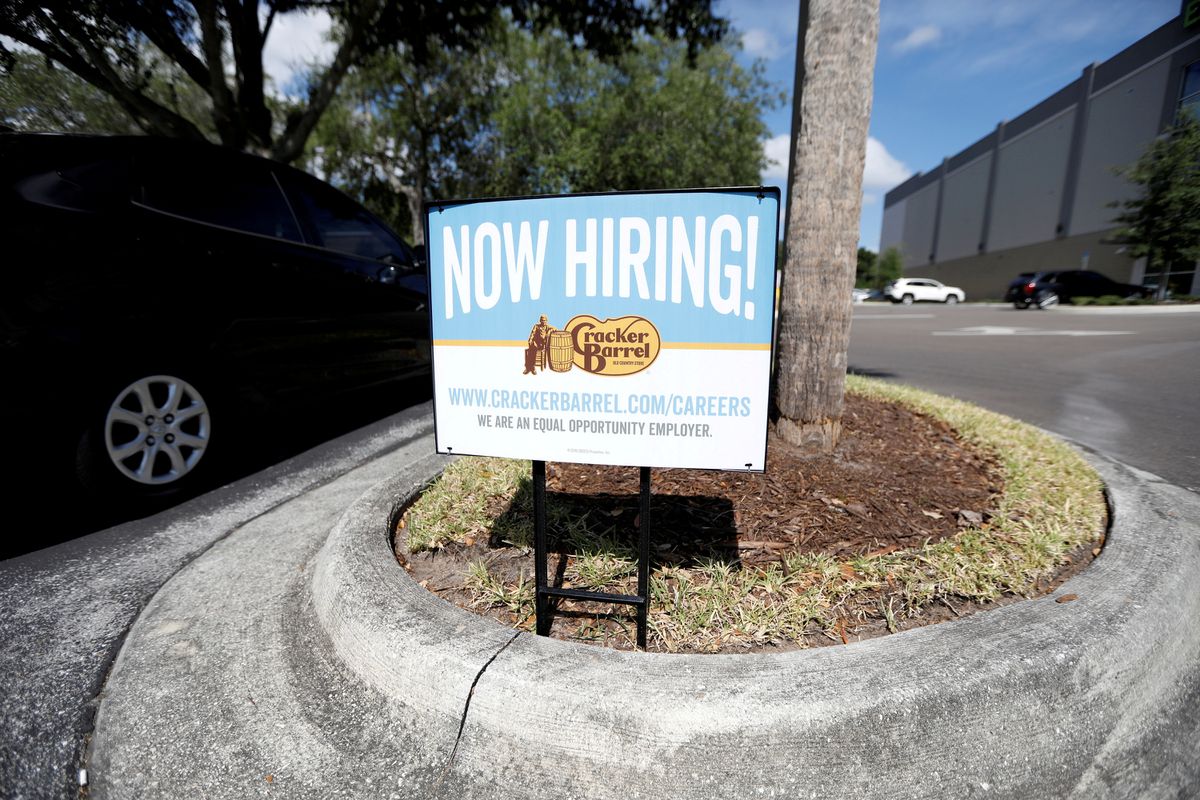 The data, which estimates job openings and turnover at the state level, showed the ratio of job openings to the unemployed had risen to 1.01 in March in the 26 states that are ending a $300 federal jobless benefit before its nationwide expiration in September. The ratio was 0.74 in the other 24 states and the District of Columbia, meaning there were still more unemployed people than available jobs in those parts of the country.

The new figures – currently being published on a quarterly basis by the U.S. Bureau of Labor Statistics as an experimental series – offer some texture to the uneven nature of the U.S. labor market recovery and the fierce political debate about the need for continued safety-net measures for those out of work as the coronavirus pandemic abates around the country.

Matt Luzzetti, chief U.S. economist for Deutsche Bank, said his analysis comparing job openings to hiring, what is known as the “vacancy yield,” showed that while hiring was tough across the country, it had hit a particular lull this spring among the states that subsequently decided to end the federal supplement.

“For that group of states, they have been having more difficulty translating job openings to hires,” said Luzzetti, while cautioning that the data did not allow conclusions about the impact of the lower unemployment benefits on the job market.

The data uses the agency’s Job Openings and Labor Turnover Survey (JOLTS) to produce state-level estimates of the number of jobs available. It also provides state-by-state volumes of hires, layoffs and employee “quits,” information that economists use to understand how labor markets are working at a level beyond the headline unemployment numbers.

More recent data are not available, and the state-level JOLTS estimates do not answer the central policy question of whether halting the unemployment benefits early will affect hiring and job creation by encouraging people currently reliant on those benefits to take jobs.

Insight on that may come later this month when state-level employment estimates are issued for June, when the first of the states halted federal benefits.

So far, data and surveys point to a potentially modest impact of policies that have taken on a partisan hue, with virtually all Republican governors in the country halting the benefits early, and only Louisiana, among Democratic-led states, joining them.

Benefits began running out in early June, with states generally announcing their plans in May. Since then, continuing claims for state unemployment have fallen more in states that have already halted or intend to halt the benefits early than they have elsewhere. read more

That does not mean those unemployed people took jobs. A recent online survey by hiring site Indeed suggested the federal benefits ranked behind other factors like spousal income, lingering fears of the coronavirus, family obligations and even the desire for time off in influencing individual decisions about whether to work.

Critics argue that ending the benefits now is putting workers at risk at a still-sensitive moment in the pandemic.

Economists, meanwhile, have been parsing the data in what has become an experiment in unemployment policy at a time when the U.S. economy seems almost befuddled – with record job openings, relatively high unemployment, yet slower-than-anticipated hiring.

“All the signs that we have right now is that those benefits going away might have some positive effects on labor supply, but it is not going to be huge,” said Nick Bunker, economic research director for North America at the Indeed Hiring Lab.

The online survey of 5,000 people from May 26 to June 3 found “an urgency mismatch,” Bunker said. “Employers would like to ramp up quickly. But a large chunk of job seekers are more patient and want to take more time.”

Still, the new data does suggest that labor markets in states cutting benefits early had tightened faster than elsewhere, underscoring the concerns of officials like Montana’s Republican Governor Greg Gianforte, who announced on May 4 that he would halt the federal unemployment benefit early.

“I hear from too many employers throughout our state who can’t find workers. Nearly every sector in our economy faces a labor shortage,” Gianforte said in a statement announcing his plan to cut the benefits in June. As of March, according to the BLS estimates, Montana had 1.75 job openings for each unemployed person, the seventh-highest ratio in the country.

The overall U.S. figure was about 0.84 at that point – half of Montana’s but an improvement over previous months. The fact that national job openings were nearing the level of the unemployed caught the attention of policymakers like St. Louis Federal Reserve President James Bullard as a sign that labor markets might be closer to fully recovered than realized.

The data, which the BLS will start publishing monthly in October, showed broad regional variations and the potential for geographic mismatches between labor demand and labor supply to slow hiring at the national level.

In a highly politicized policy debate, both sides may have a point: 21 of the 26 states stopping benefits early had more job openings than job seekers, while 16 of the remaining 24 states still had more unemployed than available jobs as of March.

There are outliers on both sides. Vermont is not stopping benefits, for example, but as of March had the highest ratio of jobs to unemployed people, with 2.07 openings for each job seeker. Texas, Arizona and Louisiana – three of the states stopping benefits early – still had appreciably more unemployed people than job openings.Reporting by Howard Schneider; Editing by Dan Burns and Paul Simao