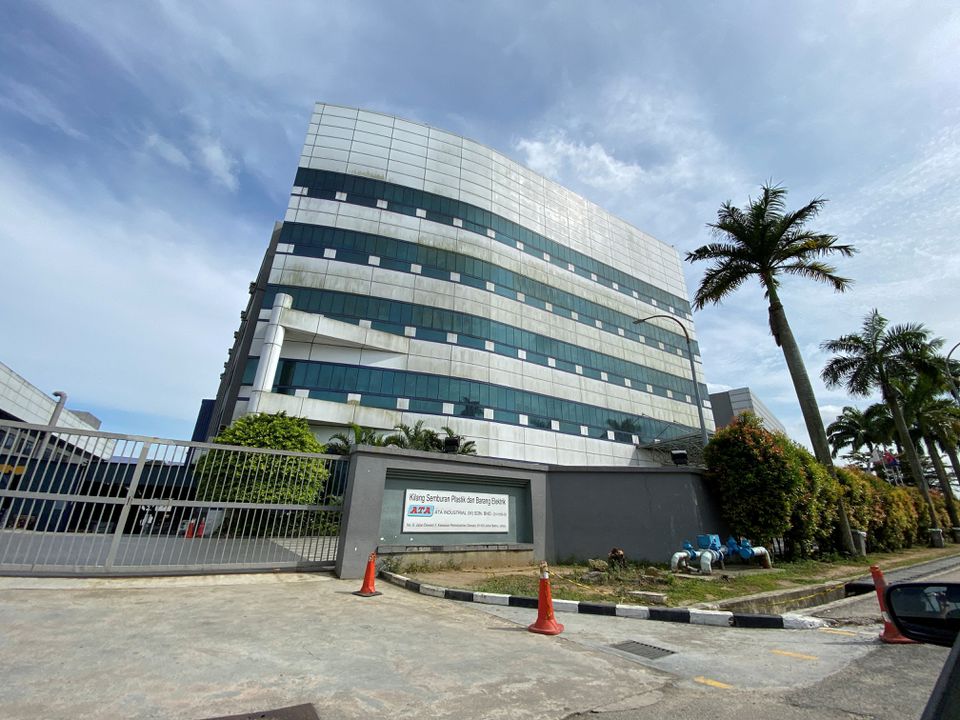 A view of the exterior of one of the ATA IMS Bhd factory buildings in an industrial park in Johor Bahru, Johor State, Malaysia, November 28, 2021. REUTERS/Liz Lee/File Photo

Malaysia has for decades banked on migrant workers to power mainstay manufacturing and agriculture, becoming an integral part of the global supply chain for products as diverse as semiconductors, iPhone components, medical gloves and palm oil.

But as the reliance on foreign labour has increased, so have complaints of abusive working and living conditions for workers, who come mainly from Indonesia, Bangladesh and Nepal.

“It is a wakeup call,” said Anthony Dass, head of AmBank Research in Kuala Lumpur. “If Malaysia does not change and with the global focus on environmental, social and governance practices, businesses could move to other countries.”

Malaysia’s labour department did not respond to questions about changing the country’s labour laws, and the trade ministry did not reply to questions on potential investment losses.

Hurst said queries from global investors about Malaysia’s labour practices have increased, including from asset managers and private equity firms.

Other Asian manufacturing hubs, including China and Thailand, face similar accusations of labour abuses. But investors have taken an immediate interest in recent scrutiny of Malaysia, and this could affect future foreign direct investment and supply contracts, analysts say.

Malaysian officials have acknowledged excessive overtime hours, unpaid wages, lack of rest days and unhygienic dormitories. Those conditions are among 11 indicators of forced labour, according to the International Labour Organisation (ILO).

Malaysian law allows more than the widely accepted maximum of 60 hours of work a week and allows work on what are supposed to be rest days.

“The legal framework in Malaysia allows, and indeed sometimes insists on, practices which are on a collision course with the ILO 11 indicators of forced labour,” Hurst said.

Malaysia last month launched a National Action Plan on Forced Labour to eliminate such practices by 2030.

The country is the world’s second-largest palm oil exporter and its chip-assembly industry accounts for more than a tenth of global chip trade. Malaysia had about 2 million foreign workers in late 2020, 10% of its workforce and double that of 20 years ago, according to the Department of Statistics. The government and labour groups estimate as many as 4 million more undocumented migrants work in the country.

Foreign workers are concentrated in manufacturing, agriculture, construction and services.

As Malaysians shy away from lower-paid, labour-intensive work, the country’s electronics and palm oil companies especially are relying on migrants, whose treatment is gaining scrutiny.

Malaysia has had the most U.S. Customs and Border Protection bans after China. In July, Washington put Malaysia on a list with China and North Korea for limited progress in eliminating labour trafficking, its lowest ranking.

Dyson terminated its contract with parts maker ATA IMS Bhd just months after the Malaysian firm posted record profits. ATA has acknowledged some violations, made some improvements and said it now complies with all regulations and standards.

ATA told Reuters in a statement it is stepping up practices for sustainable and equitable growth amid scrutiny of the company and Malaysia.

“For ATA, this has meant relooking at some of the practices that have long been a norm, not just in Malaysia but overseas too, for instance, excessive overtime and more engagement between management and rank and file employees,” the company said.

U.S. customs revoked the ban after Top Glove made the changes.

Top Glove told Reuters in a statement that exporters must “follow the best global practices as customer expectations have changed over the years,” adding it was “no longer sufficient for businesses to just be cost-efficient”.

To be sure, higher costs from improving working and living conditions may not necessarily drive away investors.

“Companies operating in Australia, the UK, the EU and some U.S. states are subject to regulations that address modern slavery in supply chains,” said Nneka Chike-Obi, director of sustainable finance at Fitch Solutions. “So they may have to accept higher costs in exchange for less supply-chain risk.”

The impact on the electronics industry, which accounts for nearly 40% of Malaysia’s exports, in particular could have a multiplier effect on the economy.

Samsung declined to comment. The other tech firms did not respond to Reuters’ requests for comment on their Malaysian operations or suppliers.

“If companies start scrutinising and pulling out contracts” from electric and electronics companies, “it will have a knock-on effect on the economy,” said AmBank’s Dass.