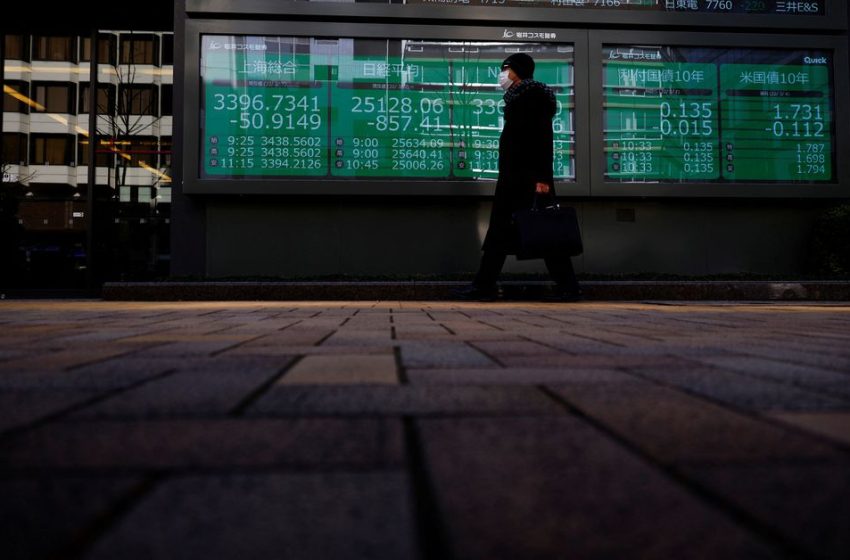 NEW YORK, March 15 (Reuters) – Wild swings in asset prices following Russia’s invasion of Ukraine are prompting some investors to pare risk in their portfolios, fearing that the type of volatility seen in commodities in recent weeks could hit other markets.

At issue is liquidity – or the ease at which investors can buy or sell an asset without affecting its price. While episodes of low liquidity have contributed to sharp gyrations across markets over the last decade, signs of stress have become more plentiful in the last few weeks, exacerbated by everything from sanctions against Russia to expected central bank tightening. read more

Should liquidity continue to deteriorate throughout markets, investors worry that other assets could be subject to the kind of violent price swings that have wracked commodities this month – which have included a one-day doubling in nickel prices and a surge in oil to 14-year highs.

“It isn’t always clear where the contagion risks lie,” said Frances Donald, Global Chief Economist at Manulife Investment Management. “This is why liquidity needs to be monitored, not just daily, but hourly at this point, for signs of challenges.”

Financial indicators are showing increasing signs of stress throughout markets.

The so-called FRA-OIS spread, which measures the gap between the U.S. three-month forward rate agreement and the overnight index swap rate was recently at its highest level since May 2020, while another closely-watched short-term funding stress gauge, the spread between the U.S. three-month Libor and the overnight index swap rate was at a similar high. Volatility in stocks (.VIX), currencies (.DBCVIX) and U.S. Treasury yields (.MOVE) has also spiked. read more

In another potential red flag, Barclays (BARC.L) on Monday suspended sales of two products linked to crude oil and market volatility, which some saw as a sign of lack of liquidity. read more

Among the assets investors have been cutting are emerging markets bonds, which saw $3.54 billion in net outflows last week, the biggest reduction since April 2020. Treasuries, meanwhile, saw some $5.4 billion in inflows in the past nine weeks, according to BofA Global Research.

Mike Vogelzang, Chief Investment Officer at CAPTRUST in Boston, said his firm had taken “aggressive action” in response to the Ukraine crisis to reduce the risk profile of its portfolios. That included cutting equity exposure and selling mortgages and a number of corporate bonds, replacing them with highly liquid short-term U.S. Treasuries.

“We’re worried about a potential liquidity scare on a global stage,” he said. “We were significantly underweight U.S. Treasuries to our benchmarks for years now, and so we really filled that bucket up and reduced the illiquidity potential in our portfolios.”

Vogelzang said events like last week’s spike in nickel prices – which came as one of the world’s top producers bought large amounts of nickel to cover bets on falling prices and cover costly margin calls – indicate the potential for “liquidity panic” in markets. read more

Investors also highlighted counterparty risk, referring to the probability of defaults in contractual obligations linked, in this case, to an underlying commodity. In a rare warning on Monday, the Securities and Exchange Commission said concentrated positions of prime brokerage counterparties pose particular concerns. read more

Bill Campbell, Global Bond Portfolio Manager at DoubleLine is concerned about the impact the Ukraine crisis is having on a “systemically important” part of global supply chains that affects not only energy prices but also vital commodities such as wheat, of which both Ukraine and Russia are major producers.

Campbell has reduced exposure to Eastern European countries in his portfolios and is looking to differentiate investment between commodity importing and commodity exporting countries to reduce risk.

“We need to become more comfortable that this crisis is going to be contained to the region,” he said.

Ryan O’Malley, a fixed income portfolio manager at Sage Advisory said the conflict had accelerated liquidity concerns in the corporate credit market, pushing him to shift his portfolio increasingly towards more liquid assets such as Treasuries.