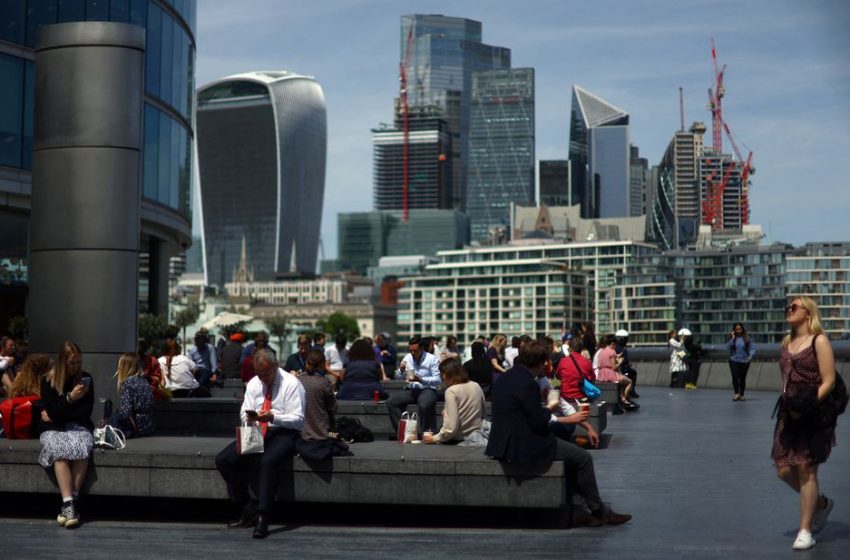 People enjoy warm weather in front of the city of London financial district in London, Britain, May 18, 2022. REUTERS/Hannah McKay/File Photo

June 10 (Reuters) – A dearth of IPOs, a plunge in stock prices and slowing global economic growth are clouding the outlook for revenue at global investment banks after pandemic spending by governments and central banks fueled a blockbuster 2021.

Russia’s invasion of Ukraine and significant monetary tightening have led to volatile trading in financial markets this year. While that can help trading volumes, it however slowed initial public offerings (IPOs) and deals led by special purpose acquisition companies (SPACs).

“IPOs are scarce, and SPACs are now about non-existent,” said Stephen Biggar at Argus Research. “The second quarter is going to be another dismal quarter for investment banking.”

Biggar said while banks will make some of it up on equity and fixed income, currency and commodities (FICC) trading volume, which has been stronger than last year, “overall the quarter is likely to be much lower.”

Banks have talked in recent weeks about the shine coming off investment banking – or at least parts of it.

Credit Suisse warned on Wednesday that challenging market conditions, low levels of capital markets issuance and widening in credit spreads have depressed the financial performance of its investment banking division.

Credit Suisse, which warned of a second-quarter loss, has its own problems as it suffered from billions in losses in 2021 via failed investments, plus the impact of multiple legal cases. read more

“This is the year of Wall Street headwinds, Main Street tailwinds,” said Mike Mayo, senior banking analyst at Wells Fargo. He said trading should increase year over year but equity underwriting is under pressure.

“Having said that, the European banks as a group, have lagged U.S. banks. This is a multi-year story that just continues to drag on longer and longer.“

JPMorgan Chase & Co (JPM.N) said at its May investor day that it expected investment banking revenues to be down in 2022, albeit after an exceptionally strong 2021.

Meanwhile, Morgan Stanley’s Ted Pick said at a recent conference according to a transcript that within investment banking, the new issue calendar was “extremely quiet” and the underwriting calendar was “very slow” although the markets business was doing quite well as clients were hedging risk.

The picture is uneven across segments. While broader M&A volumes are lower, overall activity has remained healthy and the pipeline for deals still looks relatively solid, according to investment bankers.

For 2022 earnings for five of the biggest U.S. investment banks, Goldman Sachs (GS.N), Morgan Stanley (MS.N), JPMorgan, Citigroup (C.N) and Bank of America (BAC.N), Wall Street analysts expect a decline of 22.9%, according to data collected by Refinitiv which shows expectations for a 27.4% decline for the second quarter. U.S. banks report earnings in July.

Earlier this month, the heads of U.S. banks warned about the health of the global economy, with JPMorgan CEO Jamie Dimon speaking of a coming “hurricane.” read more .

John Waldron, President and Chief Operating Officer of Goldman Sachs, meanwhile said at a conference earlier in June “the confluence of the number of shocks to the system, to me, is unprecedented.”

While financial services recruiters say they are not seeing hiring freezes, some pointed to a noticeable slowdown in hiring trends from 2021’s lofty levels.

“It is not as robust as it was last year this time. The market is tepid,” said a New York-based recruiter.

Christopher Wolfe, who heads up North American banks for Fitch Ratings, said capital markets is one segment that would be more exposed to a slowdown in the economy.

“In terms of a market downturn, investment banking and asset management segments would be most exposed,” Wolfe said.

Fee revenue in the second quarter will be hurt by longer closing times for mergers and acquisitions according to Michael Brown, analyst at Keefe, Bruyette & Woods, although he said the pace of merger announcements is improving.

Deals momentum has slowed sharply in Asia too, due to China’s regulatory crackdown and economic slowdown, with the value of IPOs in the financial hub of Hong Kong falling 90% so far this year compared to a year-ago period.

“Job cuts will be inevitable if the markets remain volatile and it stays quiet in terms of deal flow. Many banks in Hong Kong hired a lot in the beginning of last year,” according to a capital markets banker in Hong Kong who couldn’t be named as he was not permitted to speak to media.