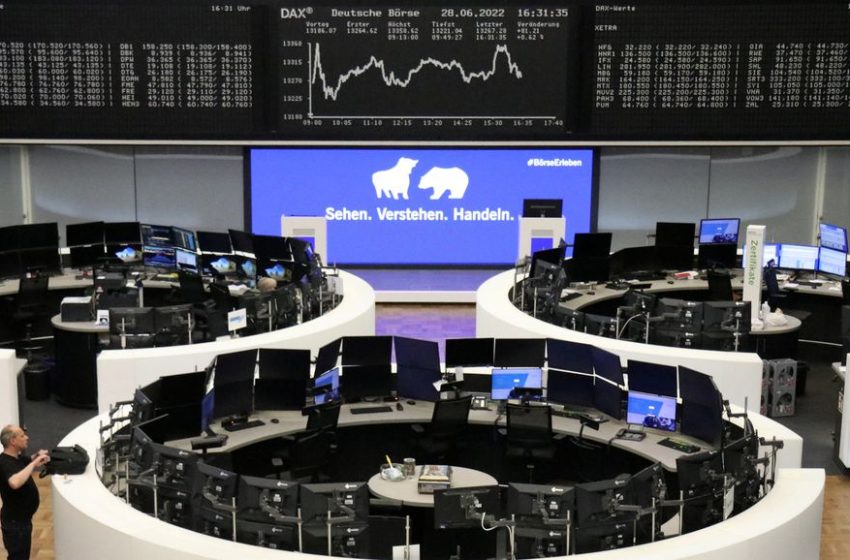 A succession of weak data releases in Europe and the United States has not prevented central bankers from doubling down on hawkish rhetoric. More is likely later on Wednesday when the heads of the European Central Bank, U.S. Federal Reserve and Bank of England speak at a central banking forum.

Those U.S. figures, following a raft of dismal consumer confidence data across Europe, triggered steep Wall Street falls, sending the S&P 500 and the Nasdaq indexes down 2% and 3% respectively (.SPX), (.NQC1).

After 7.5%-7.9% annual inflation prints across German provinces, an 8% June reading is expected for the country later in the day, versus 7.9% in May. Meanwhile Spanish annual inflation hit 10.2% in June, from 8.7% the previous month and the first time it surpassed 10% since 1985.

“The problem is that the level of inflation is so problematic in so many parts of the world and we are a long way from central banks being able to declare the job is done,” O’Connor said.

“We will undoubtedly get growth downgrades over the summer but we will also get rising perception of recession risk and I don’t think markets are fully priced for it.”

Sentiment had lifted early on Tuesday on news China was easing quarantine requirements for inbound passengers in a major relaxation of its “zero COVID” strategy. read more

While parts of the Chinese stock market, including property, extended gains on Wednesday, the positive impact of the news largely petered out – Chinese blue-chips, which hit four-month highs on Tuesday, slumped 1.5% and Hong Kong lost 2% (.CSI300), (.HSI).

“Inevitably, markets tend to overreact to these sorts of news,” said Carlos Casanova, senior economist at UBP in Hong Kong. “In order for that to be sustainable, we really want to see these measures materialise into actual reopening.”

Inflation fears are being fanned further by oil prices which extended their rise into a fourth day, sending Brent crude futures above $117 a barrel .

“The market is stuck in the push-pull between the current deteriorating macro backdrop and the looming threat of a recession, pitted against the strongest fundamental oil market set-up in decades, maybe ever,” RBC Capital’s Mike Tran told clients.

Market jitters are driving a renewed bid for the dollar, lifting it to a one-week high against a basket of currencies.

Reporting by Sujata Rao in London and Sam Byford in Tokyo; Editing by Nick Macfie and Alex Richardson